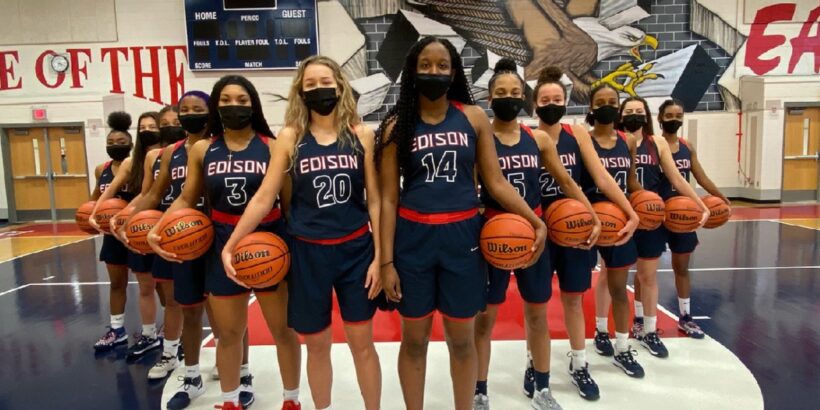 December 3rd will be a big night for the Edison Eagles’ girls program. It will raise its state championship banner from two years ago, when the Eagles were co-champions with Madison. Last year, after losing the heralded senior class that led them to that banner, Dianne Lewis’ team was pretty good as well, making it to the 6C Regional Semifinals before falling to West Springfield.

That team was very young–now the Eagles are a bit more experienced. They only lose two from last year’s squad, but Celeste Castma (graduate) and CiCi Norton (transfer) are significant losses–Castma led the team in scoring, rebounding, and blocks last year.

Still, it’s the returning talent that makes the Eagles the favorite in the National. Senior guards Lisa Anderson and Sophia Melendez are top-notch athletes, good soccer players as well, that provide ball-handling, defense, and stability. Lewis loves the veteran, leadership presence and the locker room culture those two have helped create.

Junior Aani Akins is also back, and the defensive-minded wing is one possible candidate of many to lead the Eagles in scoring this year. Gabby Jackson, Trinity Henderson, and Caroline Wells all made the National District All-Rookie team, while juniors Tierra Russell and Ciara Norfleet were Honorable Mention all-National.

The Eagles will still be young though, and that’s partly because another good freshman class is arriving in Springfield. That’s one reason Lewis is absolutely thrilled to get the season started.

“I think I’m as excited as I’ve ever been to start a season,” said Lewis, who has been the varsity coach at Edison for 20 years. “Our incoming freshman class is really good…we may have 5-6 girls that can be on the roster. We’ll take some lumps early but this is a passionate bunch of girls that can get us where we want to go by the end of the year.”

The Eagles are speedy and deep, and there’s no doubt they are physical. In fact, during the offseason Lewis has her players play in a JV boys league, so this is not a team that will be bullied. Edison will be good–if the young kids step up and Akins or someone else develops into a go-to, clutch scorer–the Eagles can be very, very good.

As good as Edison might be, they’ll get some good competition in-district where a number of up-and-coming programs reside. One such program is the Falls Church Jaguars. For the second straight year the Jags defeated South County in the first round of regionals, as Coach Katelyn Charbonneau continues to lead them in the right direction.

Still, Falls Church lost a very good senior class and will be very young. The sophomore class is fantastic, even with the transfer of Victoria Deal (Bullis). That all starts with Simone Pendleton, a second team All-Region selection last year as a freshman.

“Simone gets her hands on everything,” said Charbonneau of her tall and lanky 5’10” guard. “She helps us so much defensively and getting out in transition. Led us in points, rebounds, and steals…and has developed a nice floater in the lane.”

Fellow sophomore Sadie Laughlin got some solid minutes last season, and (you guessed it, sophomore) Emily Keefe is a very solid all-around athlete. There’s some upperclassmen on the roster, but the Jaguars lost a lot of talent and must progress gradually. By the end of the year this won’t be a team anyone will look forward to playing, however.

The Hayfield Hawks lost two pretty close games to Edison last year, and they’re a good bet to give the Eagles a tough fight this year as well. Imani Gillen is gone, but her sister Ayana Gillen, a defensive whiz, isn’t. With most of the rotation back, the Hawks could again be a factor.

The Mount Vernon Majors may be a team that no one will look forward to playing right now. That mainly stems from the fact that Isabela Gonzales is a do-everything senior combo guard that can score in droves (31 against Lake Braddock), and her sister Litzy (a junior) is a sure bet to add double-figures most nights. Read more about them here.

Do the Majors have enough other firepower to win the National District when teams key defensively on Isabela and Litzy? Perhaps. India Thomas, entering her sixth year at Mount Vernon, is very optimistic.

“We have several returnees that might surprise people this year, and take a step up,” she says.

One such person is sophomore guard Ayana Morgan. The speedy Morgan can help take some ball-handling pressure off Isabela and Litzy and help the Majors play like Thomas wants–fast. Other returnees include senior guard Bryonna Williams, junior forward Princess Mensah, and senior forward Cydnee Duckett. If those players can get enough key buckets to keep defenses honest, and the Majors are able to rebound enough to spark their transition game, look out.

One major sleeper to possibly look out for is Cameron Johnson’s TJ Colonials. Jefferson hasn’t had much success lately, but with Johnson expecting most of her roster back plus some notable additions, it’s highly likely TJ will see significantly more success this year.

“Interest [in girls basketball] seems a lot higher this year than it has been in the recent past,” Johnson says. “Plus, we have a really good freshman class coming in.”

One of those freshmen is guard Helena Johnson, who should be able to immediately enter the playing rotation. TJ should also benefit greatly from the return of senior point guard Eleanor Kim and senior power forward Kailyn Pudleiner (previously an all-district selection). With them joining returning talent such as Tanvi Bhave and Anjali Maddipatla, it wouldn’t shock us if TJ pulled off some major “upsets” this year.

COVID was especially hard on some young teams last season. The limited slate of games and practices definitely influenced the John Lewis Lancers, who were turning over a lot of personnel after a nice season in 2019-2020.

“We had our first winning season in ten years,” said Lewis coach Le Towe. “It [COVID] definitely hurt our momentum.”

Towe has some nice building blocks to work with as Lewis tries to make above-.500 seasons the norm rather than the exception. Senior Brooke Hite, who will play volleyball in college, brings experience and grit. Sophomore sisters Amya and Ariana Lynch (the point guard) were all-district selections last year in their initial varsity campaigns.

The Lancers will be extremely young and unproven.

“The freshmen we have coming in are the x-factor,” Towe says. “We want to grow this year and develop grit. We have to never stop playing hard and be able to mentally execute on the court.”

Another coach dealing with a ton of roster turnover is Justice Wolves coach Barbara Burgess.

“I don’t know quite what to expect, as I’m dealing with a whole new team this year,” she says. “My goal is to develop a chemistry and a nucleus, but some of it will have to be done through trial and error.”

Burgess can count on one thing, though, junior Elizabeth Cheek. The second team all-National District selection can play multiple positions and do almost anything she needs, so that will give the Wolves more flexibility to try different lineups.

There’s optimism, as Burgess is excited about sophomore Halimah Hajhassan’s potential. She also has been impressed with her freshman class, which has several girls that already “know the game.”

New Annandale Atoms coach Maddy DeCou definitely knows the game, as the Pennsylvania native played basketball locally at Marymount University. She’ll try and bring success to a program that has struggled to get victories in recent years, especially after losing young post players Jane Elkins and Haley Garrish to transfer.

Still, the cupboard isn’t as bare as you might think. Point guard Amanda Salisbury and Mia Mendez are juniors entering their third year of varsity ball. Sophomores who didn’t play last year due to COVID seem ready to give it a go now. DeCou is high on sophomore guard Susan Aburish, who has displayed leadership qualities the Atoms definitely could use.

“Our program needs that dedicated leader(s), that want to really want to commit to basketball,” DeCou says. The increased participation from the younger classes bodes well for Annandale’s future, as DeCou wants to turn up the defensive pressure on opponents.

“I’m a defense-heavy coach,” she says. “I want to play more man-to-man than we have in the past.”