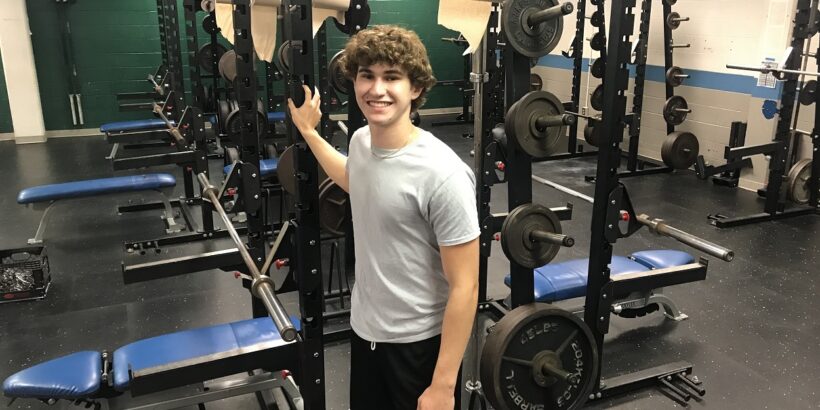 South Lakes senior Colin Luongo has brought a strong work ethic to the gym and his offseason basketball, and it has showed.
Share List

The Northern Virginia basketball season is days away. Soon, coaches and fans will see which players have the strongest work ethics.

There’s the undersized player who had to finish first in every fundamental drill and team sprints.

There’s the high school senior, who understands and accepts that she has little chance to play basketball at the next level. But that’s okay. She never misses a workout and continuously looks for opportunities to improve her craft.

There’s the player who, for most of his career, flew so far under the radar that he was categorized as an “other” by his coach when describing his roster.

There’s that reigning multi-year Northern Region player of the year. One who was so responsible about balancing school work and basketball while playing in elite AAU travel tournaments that she never went on the road for an AAU tournament without first meeting with her teachers a week ahead of time so she could get her homework done.

There’s the freshman, who showed up at his school’s summer camp to get better. When the coach demonstrated a shooting drill for the players to work on, he performed flawlessly, the very first time, blowing his coach’s mind.

This is what work ethic is all about. It certainly leads to better outcomes on the court, but it also sets student athletes up for their future – both in college and as young adults.

Ask the high school basketball coach of any player who commits to college scholarships and inevitably they will tell you their kid has a great work ethic.

“Some kids just have it; you don’t have to teach it to them or even try to enforce it,” Oakton girls coach Fred Priester says. “They never miss a practice. They come to every work out. They are the first one there, and the last to leave. It’s a mindset. It comes from within and usually from supportive parents.”

Priester says that if you say to that player, “You have a great work ethic” they often don’t know what you’re talking about. “Because with them, they are just being themselves,” he says. “This is who they are.”

When college coaches come calling, Priester said that often the first thing they ask about a player is “Does he/she just love it?” It’s that simple. And if the passion is real, the college coach will keep those players on their recruiting lists.

Having coached in Northern Virginia for more than 30 years, Priester has had plenty of hard workers. One that stands out, he says, is Jasmine Thomas, a four-time Northern Region Player of the Year, standout at Duke and current WNBA all-star. This past year she helped her WNBA team, the Connecticut Sun, to the best record in the regular season.

Priester said she knew if she could “get ahead” on the coming week’s homework assignments she’d be able to focus on her games during the weekend. She would finish her homework before she left on her trips “because she knew that when she was playing in those tournaments, she wanted to be able to maximize the opportunity of that situation. She was always accountable to her team and herself.”


Thomas, who plays professionally in Turkey during the WNBA’s offseason, says her parents are responsible for the degree of work ethic she carried from a young age.

“I never got in trouble, I loved going to school,” Thomas says. “I enjoyed learning and took a lot of pride in the student-athlete lifestyle. I had good relationships with my teachers. They appreciated that I took their classes seriously. I’m a planner. I like to have things sorted out. It helps me focus and not be overwhelmed.”

When No One is Looking

South Lakes boys coach Mike Desmond said he measures a player’s work ethic based on what a player does when the coach isn’t there.

“How do they spend their spare time away from school? Are they working on hard on their game even if there’s no one else around?”

Desmond said his senior, Colin Luongo, is one who did. He’s been bulking up in the weight room for the past year and playing pickup with the varsity team’s core of senior starters whenever he can – which was pretty much every day this past summer.

Now, with all of the confidence in the world, Luongo enters this season after having been named MVP of the Nova Cavs Varsity Summer League.

Desmond could see that Luongo decided after last season that he’s going to make the most of his senior year.

“He wants to be a part of a great thing here at our program,” Desmond says. “He realized, on his own, that he might not have the greatest talent on the team, but if he got stronger, his offense and defense would improve. His moves to the basket would get better. Before, he’d be the guy who got bumped out of the lane. But now, if you’re the other team, you have to worry about him.”

He led the Seahawks to the summer league title.

“The first time I had a chance to play against varsity level players I couldn’t get shots up,” Luongo recalls. “I didn’t have a lot of confidence. My sophomore year, when I watched the seniors go out after their season ended with a really tough loss, I could see the pain they suffered and it really stuck with me.

“I wanted my senior year to be better. I started working on my game every day in the offseason – and before that when we were stuck at home during COVID. I lifted weights in my basement and went to local parks to shoot. I was obsessed with getting stronger and better. I was obsessed with being in the weight room. I worked out at least an hour a day for six days a week. I was so skinny. I put on about 25 pounds. I could see the difference it made, and so could the coaches. They became more confident in me, and I started to feel more confident in myself. You can do all the workouts and lift weights, but if you aren’t confident, then it doesn’t matter.”

Luongo says the other core seniors on the team worked out every day, continuously supporting each other.

“We motivated each other,” Luongo says. “For them, they already had that ‘work hard’ mindset. That’s how they got to be the players they are. I began to pick it up from them. They told me that there’s a role on this team (be a shooter) and they helped me get there. Once I knew what the role was, I started chasing it.”

Sophia Zinzi, a senior, is the only Oakton returning starter from last season.

“She’s a nice player, but even she will tell you she’s not interested in playing in college,” Priester says. “But she’s been to all of our workouts. She improved in the offseason. She looked for opportunities to play, even if it’s just shooting in her backyard.”

Zinzi says what drives her is that last chance to play against some of her long-time neighborhood friends – those who play at rival Madison, a team Zinzi hasn’t beaten the past few years.

“I’ve known some of those girls all the time growing up,” she says. “This is my last year. Our team lost a few key players, but we want to prove anyone wrong who doubts us. I want this to be a great year.”

Long-time Chantilly boys coach Jim Smith, now coaching at Meridian High (formerly George Mason High), says the most important job of coaches “is to instill the traits of hard work in our players and then reinforce them every chance we can. A strong work ethic leads to success in life – not just basketball.”

He recalls a player from a generation ago named Matt Estes, a 6-foot-1 senior post player with a great work ethic.

“He wanted to win every drill, every time we ran sprints, anything,” Smith says. “He was just so competitive.”

And it made a difference. Estes “would match up against 6-4 and 6-5 guys and front them, get in their way, and would pop out to shoot a three,” Smith says. “It was great to see when other teams would bring in a wing player to guard him instead of the other way around: us having to put in a taller player to guard their bigs.”

Smith’s uses his team’s offseason training program to build a culture. “It’s not just basketball, it’s all the other things like lifting weights and having a team approach,” Smith says. “The kids learn empathy and leadership.”

Herndon boys coach Kevin Quinlan says that, “As coaches, we try to give the kids as many opportunities as we can. Open gyms, the weight room, you see who shows up all the time. These players focus on their dream. They have to have the discipline and the maturity to be able work on their game outside of their school’s team’s structure.”

Quinlan says he sees many more kids who show the opposite of a strong work ethic.

“They come into high school ball having seen that they have a lot of skills, and that they’ve succeeded at every level up until then, and then their skill level becomes stuck in cement because they are a part-time participant in opportunities and they have a sense of complacency,” he says.

Desmond concurs. “I hear all the time about great kids coming up in Reston youth leagues,” he says. “They might be great as freshmen, but then they are not hungry after that. They’ve always gotten by based on what they did ‘yesterday’ and not what they can become ‘tomorrow.’ Others in their class, who went to all of the workouts and who went to the weight room, pass them by in terms of ability.”

When a Freshman Just ‘Gets It’

Yorktown boys coach Joe Reed knows a hard worker when he sees one.

At camp this year, he presented instructions for a basic, progression-driven shooting drill the players could work on.

“I had a freshman show up (Andrew Maria) and it was amazing how focused and precise he was,” Reed says. “His attention to detail on every shot from each spot on the floor was amazing. This is the kind of kid who gets it. Clearly, he’d spent most of his time focused on fundamentals – and not just chucking up three-pointers all day. There are too many freshmen who show up and all they want to do is show you that they can hit a three.”

Reed says it’s difficult for players today to be focused and disciplined with a routine.

“You have to find time to do a routine uninterrupted and with no distractions, no phones, no social media,” Reed says. “That’s really tough for kids today. And it’s one thing to text or post that you are working out, but really, you still have to do the workout, and not just say you are doing it.” Wink, wink.

Reed explains that for a personal workout regimen to be worthwhile, it must be tangible. Today, there are workout apps that can help with this, such as HomeCourt.

“Players can figure out a workout routine for themselves, but it is better to have coaches help them with it because they can point out the players’ weaknesses so they make sure to work on that and not just one thing, like three-point shooting.”