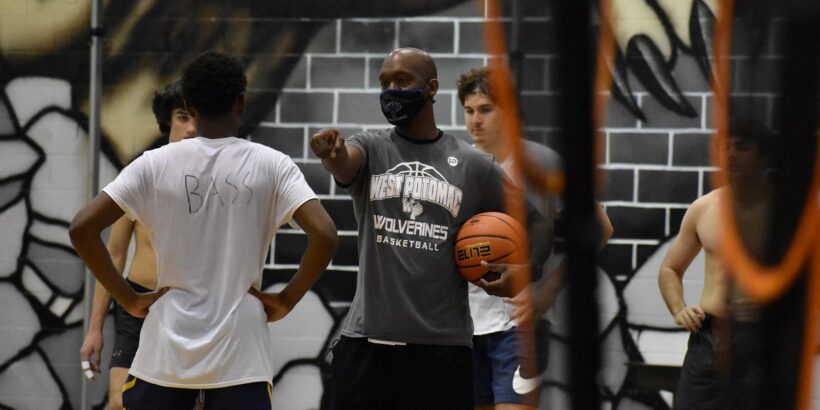 There’s no public school district in Northern Virginia, perhaps in all of Virginia, that has a regular season grind quite like the Patriot District. There are precious few easy games, and until Centreville won out of the Concorde last year the district had boasted three of the last four Class 6 state champions. Teams that advance from the Patriot at regionals and states are always battle-tested.

“The Patriot is no question one of the best districts in the state, top to bottom,” West Springfield coach Durmia Marshall says.

Now two solid basketball programs in Alexandria City (formerly T.C. Williams) and West Potomac rejoin the district from the now-defunct Gunston. Who wins the regular season? We’re not sure. Who wins the district tournament? We’re even less sure of that, but expect even the lowest-seeded teams to be capable of an upset or two.

At a recent practice of the West Potomac Wolverines, senior Aidan Barr reminded his teammates that every possession has to be a battle. That suggested to us the Wolverines are ready for the grind ahead. There’s no doubt Coach David Houston III, who has been at the school for almost 20 years now, is.

“We were previously in the district, before the Gunston, and we were [Patriot] champs the last two years,” Houston told us. “Lots of different styles and good programs here, but we didn’t waver back then against who we played. We have our approach and our way we play–we have to be consistent and make teams prepare for us instead of worrying too much about them.”

Teams definitely will have to worry about the Wolverines. They were okay last year with a very young team, but now everybody is back and there’s notable improvement. One guy that made some noise during the offseason was junior guard Donovan Bass-Briscoe. A second team all-Gunston selection, Bass-Briscoe poured in points for his AAU team over the summer and got stronger physically. He can score, shoot, handle the ball, and Houston loves his long arms and active hands on defense. He’s a star-in-the-making.

Barr is a forward who provides scoring, leadership, and muscle inside. Fellow senior Terrell Neal is athletic and can provide outstanding defense at multiple positions. So can precocious sophomore guard BJ Nkrumah, who Houston says “understands the game.” Junior Nygel Anderson is a tall lefty that has the potential to be very, very good.

Houston has many options and will have more when the football team is done playing, and guys like Owen Joachim and Brite St. Bernard join the roster. The team has depth, shooting, ball-handling, defense, and substantial height. All the ingredients are there for success.

“I really love this team because the kids play hard. We have enough depth, and there’s never an effort drop-off when I sub.”

The Alexandria City Titans were the only local public school to not play basketball last year, and that hurt.

Still, the school formerly known as T.C. retains a rich history and a ton of kids who love the game of basketball. The Titans also held up fine recently in the Wakefield Fall League. Prue, a well-regarded coach and former college basketball star, likes the talent present but there’s no doubt he’s got a lot of work to do.

“We have two seniors on the roster and one who has never played varsity basketball,” he told us. “We have a ton of development to do…definitely need some experience.”

Prue likes sophomore Sean Burbage, a wing with good size that has ball-handling ability. He’s also high on Seth Harold, a wing that had a very good AAU season. There’s also reason for future optimism with some fantastic younger classes on the way.

For right now, though, it’s one step at a time. Can the Titans be a factor in the challenging Patriot?

“Check in with us early in the season and then a couple months later,” Prue says. “I think there will be a big difference.”

There’s no doubt the South County Stallions will be a factor, if not an outright champion. They have one of the area’s best scoring threats in guard Kenyani Lee. Lee is a dynamic, small guard who is fully capable of playing the point, but is such an explosive player we expect him to play a good deal off the ball on offense.

Guards Jamison Lynam and Paul Anderson also return, though the Stallions lost a fantastic senior class to graduation. Their strength may be their defense, as they have multiple guys able to apply significant on-the-ball pressure. They have quickness and athleticism–if SoCo’s younger players are able to rebound and supplement Lee with some consistent scoring, especially up front, look out.

Same goes for the Woodson Cavaliers, who like South County have an incredibly solid starting backcourt. Seniors Alexander Klein and Andre Pacheco averaged around 25 points per game combined last season, and both three-year varsity players are back for more.

“We have the experience in the backcourt,” Woodson Coach Doug Craig says. “If we can fill some other gaps I like our chances.”

Craig is extremely complimentary of Pacheco and Klein.

“Pacheco is that guy opponents don’t like to play,” he says. “He doesn’t always blow you away in the box score but he does everything–he plays great defense, he has handles, and he can score. Klein has a great attitude and can really fill it up quick.”

You know the well-coached Cavs will be scrappy and play defense. 5’11” senior Brady Lencz may be a baseball commit to Marymount, but he’s also a guy a ton of basketball teams can use. He averaged seven rebounds per game last year, and his ability to defend multiple positions and box out bigger guys gives Woodson flexibility.

Seniors Sinneh Bangura and Jack Gallagher, as well as junior Charles Schmidt also return from last year’s roster. If some or all of them step up their games (Bangura came on strong at the end of last year), the Cavs can go from pretty good to really good. There’s some sophomores around that also expect to play key roles as well–forward Sean Donovan and guard Ethan Conklan.

This is a team that went 7-2 in last year’s abbreviated Patriot in-district season. Even in a district as deep as this one, it would be very surprising if the Cavaliers didn’t finish close to or at the top this year as well.

The Fairfax Lions were the Cavs’ mirror opposite, finishing 2-7 in the Patriot last year. They could go the same way this year in this district of death, but you could also argue them as a dark-horse favorite to win it. We’re not kidding at all.

Coach Mike Barbee’s team returns almost everyone and while he had only a handful of seniors last year, now he has many. Oh, and one really, really talented junior in Margad Choijilsuren. Choijilsuren is a guard-forward with legitimate DI size who led the team in scoring last year. He’s got a good jumper and he can bring the ball up the floor to set the offense if need be. Colleges should have their eye on him to see if he becomes a breakout star.

Senior guard Kaden Horner can also play at the point, but he’s such a good shooter we expect to see him play some shooting guard as well. Xavier McCrary missed some time to injury last year and he’s back as well. He’s a tall 6’3″ guard that can also play multiple positions.

Fellow seniors Joe Yingling, Shayan Rezaassa, and post Mason Ackerman are back as well, among others. There’s versatility and talent, as well as experience. If sophomore guard Ronier Peters can provide a little bit of a scoring charge when needed–things look bright for the Lions.

“We have to win the close games in what is a very deep district,” Barbee says.

Private schools are constantly poaching public school standouts in Northern Virginia, and the Lake Braddock Bruins and West Springfield Spartans lost some significant talent this offseason to transfer. The Bruins’ Jaime Kaiser (Bishop Ireton) and David Solomon (Virginia Academy), and the Spartans’ Gibraltar Coleman (Flint Hill) are no longer around.

Nevertheless, we view West Springfield and Lake Braddock as legitimate threats in the Patriot.

West Springfield still returns the majority of its roster, led by senior guard Omar Chambers. Chambers has been on varsity forever now, and he can fill up the stat sheet in a hurry. He’s always a threat to pick the opposition’s pockets and go coast-to-coast. Fellow senior Ali Sharif compliments Chambers well inside. With Coleman gone, it’ll be even more critical that Sharif provides inside scoring, muscle, and rebounding. He’s done it before, now he just needs to do it more consistently.

Junior guard Jaylen Surell is a returning starter that was a big factor in several Spartans wins last season. He’s a breakout candidate Coach Marshall can count on in the clutch. Marshall is also high on Cullen Robinson and former South County guard Dorian Credle.

Marshall is well-known as a coach that gets the most out of his guys and forces close games against formidable opponents. Now, with an experienced senior class, can the Spartans win most of those close games?

“We’ve taken a lot of lumps recently, but made a nice little run last year,” he says. “In every close game we can’t afford to get thrown off or upset.”

Lake Braddock doesn’t have quite the returning experience West Springfield does, but there’s still reason for optimism even without Kaiser and Solomon. That optimism starts with senior guards Quincy Via and Trey Seigle. Both have started for years for Coach Brian Metress, and both have demonstrated the ability to pour in points in Metress’ fast-paced system. The pair will hold up fine versus the district’s premier backcourts, and will dominate many others.

Davis Wade is another guard who Metress says gave the Bruins incredibly valuable minutes last year as a part-time player. He’ll play a lot more now. After that, there isn’t a ton of returning experience, so who plays and steps up is anybody’s guess.

“The rest of the guys have never started a varsity game before,” Metress says.

Metress, one of the longest-tenured coaches in the area, still knows how to get guys to fill roles and present unique challenges to opponents from what he has. If some of the inexperienced Bruins step up and Lake Braddock can hold its own down low and on the boards, the Bruins should be a tough out.

The Robinson Rams kept six sophomores on last year’s team. 2020-2021 was a tough year to do that with the COVID-shortened season.

“We didn’t have a lot of time to teach last year,” Rams Coach Ben Gildea told us. “This year we have had more time to practice and teach, and those guys have developed skill-wise. They’ve also met the challenge and spent time in the weight room.”

The Rams are still young, but there’s no doubt Robinson will be far better equipped to start the season this year. Eight players are back from last year’s team, including point guard Aaron Blahusch. He’s a scorer who Gildea says has worked hard on his defense this offseason. Forward Ryan Lauderdale will also be key. His length down low is crucial for the guard-oriented Rams.

Three seniors will also play important roles. Forward William Maag returns, as does guard Daniel Martin, a guy Gildea says will definitely show up in the box score. Walt Gorski is the third senior, on board after not playing last year. One sleeper is junior guard Dylan Vaughan, who did not play last year as well (injury).

Last year the Rams tried to play a fast-paced game. This year, with more practice time, Gildea says the team will be a little more deliberate, focusing on defense and half-court execution.

“I think we’re going to surprise some people,” he says.