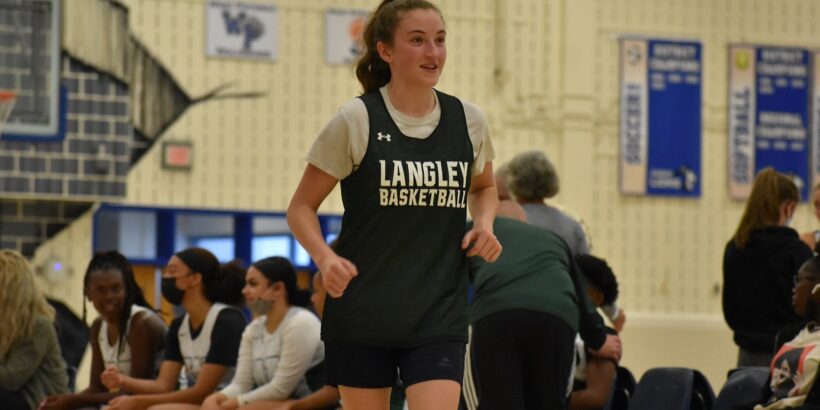 Senior Caitlyn Shumadine is one of the area's best shooters, and teams with AB Holsinger to form one of NOVA's best backcourts.
Share List

Following a disrupted season last year and an offseason of realignments, we expect the Liberty District to be one of the most competitive districts this year.

After falling short in the regional tournament last February (no districts were held last season), the Langley Saxons and their strong senior class are poised to capture the title this season and do damage beyond just the district.

They’ll be led by senior point guard AB Holsinger, who Head Coach Amanda Baker anticipates to be in the Liberty POY conversation this season. Holsinger has surely improved in each season, and is one of the most fundamentally-sound and controlled point guards you’ll see
in the region. She is joined in the backcourt by sharpshooter Caitlyn Shumadine, who transferred in last season.

“Last year was such a short season, I don’t think she really got a chance to get acclimated to the team, so she should be much more comfortable with her role this season,” said Baker about Shumadine.

In the post, Keelin Byrne had an impressive showing last year and is also committed to play lacrosse at Virginia Tech, but first she’ll be busy defending the paint for the Saxons this winter.

Right behind Langley, another team ready to do damage is Herndon. After a slow start last season, the Hornets really found their groove and were a tough out in postseason play–especially after they upset favored Marshall in OT at the regional tournament last February. They retain several talented and solid players. Guards Aylin Humphreys and Tania Bushrod highlight as seniors. We expect them to have a strong season and perhaps upset some teams again this postseason.

Marshall will don a brand-new starting five this season after the departure of a significant senior class. Ready to step in and lead is senior Rylie Hughes, who has been a solid part of their rotation the past two years. Brennah Lee-Pawlak will be running the point and will share some of the leadership duties along with Hughes. She’ll be a fierce defender for a team that has been one of the scariest offensive groups in the area in recent years.

The Statesmen went 10-0 in National District play last season, so it will be interesting to see how they do in a new district this
year. They will have a very young team with four freshmen and two sophomores, one of them being Allie Nassif, who made varsity last year as a freshman.

“Allie is a multi-faceted offensive player who we expect to have a breakout year,” said Head Coach Mike Trivosonno. “It ought to be a challenging but very fun year.”

McLean will continue to build on a young core, led by senior forward Mia Fitzgerald and junior guard Shushan Kirkorian. Fitzgerald, who will soon be a four-year varsity player, was named to the all-defensive team and first team all-district last year, so you’ll see her do everything on the floor, thanks to her length and good size.

Kirkorian and fellow junior Kara Bremser will provide firepower on offense and defense as well. And now with a year under their belt, sophomores Brooke Thomas and Alden Wagner “will play vital roles this season,” according to Head Coach Jen Sobota.

McLean started last season off slow, but grew as the short year went on and ended up winning three out of its last four games. The Highlanders may be another season or two away from getting back to a district crown, but they are not a team to be taken lightly.

“This team is full of competitive athletes and there are a few freshmen that will hopefully look to add to that competitive attitude and make an impact this season,” said Sobota.

Washington-Liberty did not have any seniors last year, and struggled in the short season, winning just one game over Wakefield. The Generals also had some games canceled, which surely hurts a young team more. They will continue to build in this competitive district this season.

The Yorktown Patriots have found some success in the regular season, but have struggled to break through and cut nets. Head Coach DeVaughn Drayton captured the Liberty Coach of the Year award last year, leading a really fundamentally sound, solid team that saw its season come to an end at the hands of now-Concorde District member South Lakes. They will be led this year by senior and Oberlin commit Ana Bournigal and second team all-district selection junior Taylor Chase. The Patriots were .500 at 8-8 last season.

Note: transferred to Potomac, as well as junior and honorable mentions Maya Solis, Sami Stewart, and senior Lilliana Galloway. The Warriors were 5-10 last season, and with the returners, should improve this year. However, like Marshall, it will be interesting to see how they do in a new district with a new coach (Jackie Beathea).