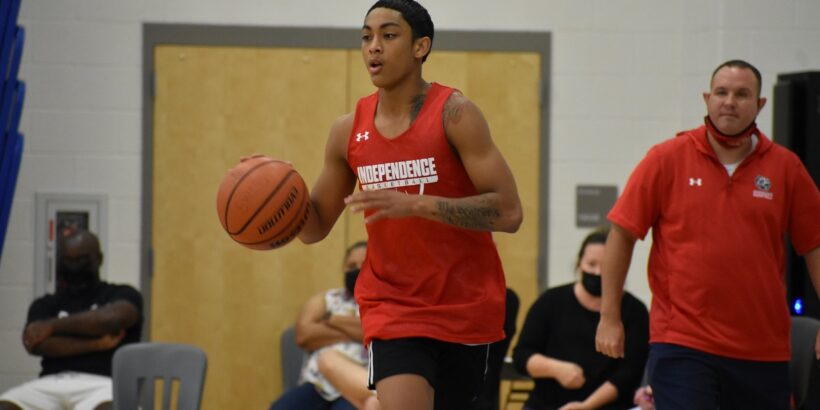 First team Potomac District selection Elijah Easter is one of several transfers to Independence that should make the Tigers even better this year.
Share List

Most teams don’t look back at the COVID-infested 2020-2021 season with fond memories, but Stone Bridge sure does. First champs of the tough, seven-team Potomac District, then regional champs after a victory over district foe Potomac Falls, the Bulldogs eventually went on to defeat Green Run to win a Class 5 state title.

Can they repeat as state champs? Sure, but first thing is first. The newly-revamped Potomac District offers teams that can not only challenge Stone Bridge for the district title, but for a state title as well. There’s only six teams here now, but unlike last year just three teams from the Potomac will make regionals.

It’ll be a dogfight.

The Independence Tigers under Head Coach Corey Stitzel join the fray. The Tigers moved up to Class 5 this year and are well-equipped to do so, having won 3B regionals last season in an epic three overtime win over Skyline. While Independence lost the talented Gagen brothers, who have decided to concentrate on baseball, the Tigers have gained a number of high-profile transfers that instantly make them a district and state contender, if they weren’t already.

“We have a chance to be special,” Stitzel says. “I think our starting five will be as good as or better than any public school around.”

Coming from Freedom-South Riding are guards Elijah Easter and Alex Bokman. Easter is a senior point guard capable of filling it up from the field and getting to the line, while Bokman is known as a shooter who does a whole lot more than just three and D. Arriving from Broad Run is junior wing Matin Perdue, one of the most underrated players around. Athletic senior big man Malik Lewis comes from Unity Reed, while tall forward Julian Randolph came from Loudoun Valley.

Those five alone would be a talented group, but let’s not forget about the Tiger holdovers. Junior Wes Williams is a legitimate Division I point guard prospect (with the offers to prove it) with his good size, quickness, and ability to score and defend. Sophomore forward Gabriel Coulthurst is also drawing next-level interest–he was easily one of Northern Virginia’s best freshmen last year. He heads a very good sophomore class that gives Stitzel depth.

There’s length, depth, shooting, and ball-handling on board–really everything a public school coach could reasonably hope to have. Stitzel is especially excited about the sensational backcourt of Easter and Williams, who he says are a little “Fire and Ice.”

“We’re going to play fast and let those guys play in space,” he says. “They set the tone with their ability to get in the lane and they’re so unselfish.”

Local hoops fans are circling the Independence-Stone Bridge games on the calendar already. One, they’re two very good teams; two, Stitzel used to coach at Stone Bridge. It should be heated, but fun.

The Tigers are an obvious contender–it may not be as obvious but the Riverside Rams are too. While the Rams lost the talented Michael Ziller to graduation, they return a lot (four starters) from last year’s team that went 10-5 and held opponents to about 47 points per game.

Start with the coach’s son, senior Cameron Koscinski, who is signed to play at Messiah College next year. He’s a tall guard that can absolutely fill it up from long range. Next let’s mention intriguing next level prospect Jamie Ntiamoah, a double-double guy who can hurt you inside and is developing on the wing. Both are second team all-region players, and both should be even better this year.

Tyler Carlton and Tyler Flynn are solid returning starters–Flynn is an underrated point guard who could surprise opponents this year with his improvement. Another guy to watch is junior forward Jaden Frazier. He’s a defensive whiz who filled in for and played alongside Ntiamoah very admirably last year. There’s other returnees, some who played last year (Griffin Ullsperger) and some who didn’t, like junior Will Lind who also plays quarterback for the Rams’ football team.

Basically coach Mike Koscinski has a ton of ingredients for success here–a go-to scorer or two, depth, defense, guards, height, you name it.

“I think we’re plenty deep,” Koscinski says. “The schedule should tell us quickly how good we are. If we can find a way to get stops and rebounds–we’ve got three guys to challenge shots inside–we can contend.”

Wait, we haven’t talked about the Stone Bridge Bulldogs yet? Well, in fairness it is still football season.

Four seniors did graduate who were important pieces last year, but most of the rest of the roster returns. Just Hundertmark and Thomas, both fantastic athletes who understand the game, make the Bulldogs instant contenders. Still, there’s a lot more to like.

Three sophomores who combined for 32 points in the regional final win over Potomac Falls return. Domenic Duncan, Torben Hart, and Sam Whitehead are now juniors who will be expected to assume even greater roles this season. All were rotation players a year ago and all are capable of elevating their games. Senior guard Michael Hafer, a three-sport athlete, could also factor in more. So could junior guard Kaden Limcaoco, little brother of the graduated Jerico. Potomac Falls transfer guard Rico Brown might be on hand as well, after football.

Stone Bridge does not appear especially tall and everyone must rebound if the Bulldogs are to be as good as last year. But make no mistake, this team is primed for another magical run.

As usual, we’re intrigued with the potential of the Potomac Falls Panthers. Potomac Falls finished fourth during the regular season in the Potomac, but ended up as Stone Bridge’s last local challenger standing. The Panthers have lost so much talent from fantastic senior classes the last few seasons and this year is no different–gone are all-district selections Jake Mancuso, Aidan Carrillo, and Nolan Levenhagen.

Still, P Falls always manages to be good, as it is a deep program as strong as anybody’s. The Panthers should be good again this year, at least by the time it really counts late-season.

“We have some returnees, some seniors that will now get their shot on the big stage,” long-time Panthers coach Jeff Hawes says. “We’ll be a work in progress but we always like to think we’ll be at or near the top of the district.”

Senior Owen Copeland and junior Eli Adegbenro are very good all-around athletes who bring some height down low. Senior Kyle Ables is a point guard with a lot of experience who can set up his teammates and score the rock. Jalen Jackson played some quality minutes last year as well–Hawes is high on his ability to defend. One X-factor is senior guard Mitch Laurenson, who missed the latter part of the season last year to injury. He’s back, and the Panthers gave Stone Bridge a really good game back in January when he was healthy.

Another X-factor is a good sophomore class that rises from the JV and ninth grade teams. Last year those teams were very good, and several of those kids could contribute on varsity this year.

“I think we’ll be able to play defense and rebound,” Hawes says. “Our scoring is where we need to develop as a team.”

The Briar Woods Falcons are a dark horse to make some noise. Last year they upset Rock Ridge in the first round of regionals after finishing fifth out of seven teams in the Potomac, regular season. They clearly got better, and this season the Falcons return most of their roster, only graduating three seniors.

Those seniors (Tehan, Meyers, Nelson) were good though, and the loss of Robert Glynn to transfer (Virginia Academy) will hurt significantly. Still the Falcons have a lot of scrap in ’em, and a fair amount of returning experience. Senior guards Brayden Fetterman, Tyler Hayworth, and Javier Curry-Arregui all played major roles last year and will do so again. Senior forwards Ian Walker and Brycen Bohmer also return–they played minutes last year but will really have to produce this year, especially on the boards.

Defense will be key for Briar Woods. Their guards will pick your pockets if you dribble too much against them on offense.

It’s been hard the last couple years for the Woodgrove Wolverines on the hardwood. They’re 3-30 in that span overall, and have been hurt by transfers a good deal.

Still there is reason for optimism under second-year coach Jason Toton. Six players return from last year’s roster including talented senior Harrison Graham and a fantastic three-sport athlete, junior big man Chris McCullers. Kenny Chicas, a guard who made the team as a freshman, looks like a keeper as well.