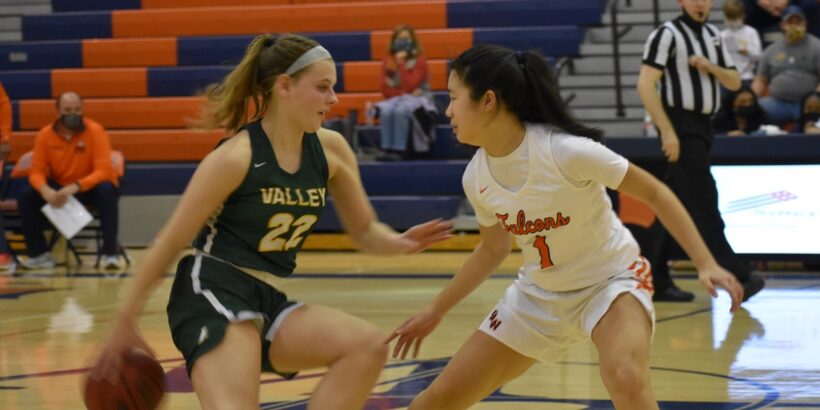 Loudoun Valley senior guard Jane Bodamer prepares to go behind her back versus the Falcons' Tia Chen.
Share List

In the opener for both teams on Monday night, Loudoun Valley showcased both new and experienced varsity talent to outlast Briar Woods, 41-37.

The visiting Vikings set the defensive tone early, forcing three turnovers in a row right off the bat and frustrating Briar Woods with their 1-3-1 zone. With long freshman forward Elizabeth Thornton at the top of the Valley zone, the Falcons never seemed comfortable on offense, shooting just over 25% on the night.

Valley took command early in the second quarter, embarking on an 8-0 run to take a 17-9 lead. After Briar Woods clawed back, the Vikings were once again able to regain that eight-point lead after three, 34-26.

Briar Woods never folded though, and a reverse layup by sophomore star Hope Drake with a few minutes left brought the hosts to within two at 39-37. The Loudoun Valley defense prevented any more good looks at the basket the rest of the way, however, and two clutch free throws by senior Allyson Cassell iced it.

While Loudoun Valley didn’t shoot all that well on the evening, the Vikings registered an nice win on the road against a quality opponent. Particularly impressive was the Vikings’ passing–Bill Reynolds’ team registered an assist on almost all the baskets it scored.

Star senior point guard Jane Bodamer was a big part of that, running the offense expertly and pushing the ball up-court to get the Vikings, especially Thornton, quick looks at the basket. Bodamer had seven points, seven boards, and four assists, as did Cassell. Fellow senior Alison Pike added six points.

Thornton announced herself as a factor right away in her first varsity game, finishing with 12 points, nine rebounds, and three assists. There’s obvious upside with her, as there is with sophomore Alex Phillips, who added seven points.

Valley, which lost a solid senior class and star forward Louis Volker to transfer, showed it will still be a tough squad to beat. We asked Bodamer about that, the win, and what she wants to do more of her senior year, as well as her college plans (we think more schools should be recruiting this one).

Briar Woods can still take a lot of positives from the loss, especially with ten freshmen and sophomores on the roster. Drake led the way for the Falcons with 13 points and 11 boards.