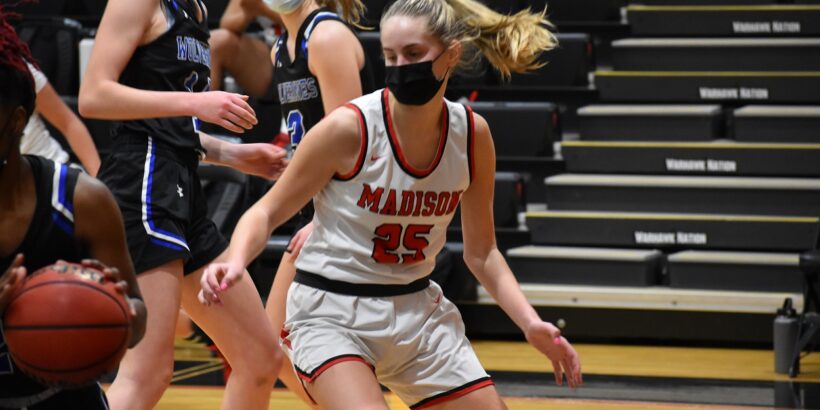 Kiera Kohler is one of several four-year letterwinners back for the state champion Warhawks this year for one more go.
Share List

The Concorde District, home to several historic and current powerhouses, will once again be led by the back-to-back Class 6 state champion Madison Warhawks. Head Coach Kirsten Stone calls herself lucky—she’s returning all but one player from last season’s 16-1 team.

The scariest thing about Madison, as it seems in most seasons, is that many of its most talented players are underclassmen. Not to say they don’t have their fair chunk of talented seniors each year. Twins Grace and Alayna Arnolie are seniors who will be leading the charge, followed by fellow four-year varsity members Kiera Kohler and Mia Chapman, who was sidelined or limited most of last year due to injury. She will contribute on both sides of the floor.

Junior Sarah Link is another shooter who can handle the ball and defend, and bring back more championship experience as the Warhawks look to go all the way again. The Warhawks were a frightening opponent last season, but with eight seniors and almost their entire roster back this year, that may have been just a foreshadowing of what’s to come.

The departure of a significant senior class will allow the South Lakes Seahawks to show off new assets and for returners to step up, including several key players from their 12-5 squad last season. One is junior Renee Timbers, who will run the offense again this year but will have to adjust to new starters alongside her.

“She really put a lot of game work in since the end of last season, and it shows,” says Head Coach Christy Winters- Scott. Timbers is capable of hitting from outside and plays under control very well.

Along with Timbers in the backcourt, senior Daisya Brown is a hard-nosed defender who will lock down the perimeter from night to night. Stepping up in the post this season is forward Erin Barr.

“She is playing with pure grit, and now as a senior, her sense of urgency is shining through,” said Coach Scott of Barr.

Joining her in the paint will be junior Jessica Dornak, who had an impressive sophomore campaign coming off the bench and will definitely hold more responsibilities this year, as her and Barr will be stepping into the big shoes of now-departed Georgetown Freshman Brianna Scott.

The Seahawks dominated the Liberty District most seasons in the last decade, so having them in a new conference will be interesting.

“It will be a welcomed challenge for our young team. We have competed against a lot of our new district teams deep into Regionals and States over many seasons,” said Coach Scott about the change.

After having even fewer games than other schools in the prior small season thanks to COVID-related cancelations, the Oakton Cougars can only be thrilled to get a full slate of games this year. Disruption can make it hard on any team, and the interruption of the season definitely made it hard on the Cougars.

Though, any team coached by Fred Priester is going to be in the mix for dominance. It was only a couple of years ago that his team did poorly in regular season district play, only to completely flip the script in the postseason tournament and win the district crown.

His squad will be led by senior Sophia Zinzi, the only returning starter this season. You can read more about her strong work ethic here.

Like Oakton, the Centreville Wildcats also suffered a few interruptions. But the Wildcats only graduated two players, so they will look to improve with their remaining youngsters after only notching two victories in a shortened season.

“At this moment we are staying locked in to getting better every day,” said Head Coach Josephine McLane.

The Wildcats will look to junior Rylie Thurston this season for leadership and offense, having been a significant contributor in her sophomore campaign. Other notable returners include senior Vianna Marion and sophomore Hannah Wakefield.

“To prepare for the Concorde is one piece of the puzzle, but soon we have to go out and compete with the best of the best every night. We are ready for the challenge and looking forward to it,” McLane added.

Josh Regan’s Chantilly Chargers are another squad that saw the departure of a big impact senior class, but return players who aren’t so young anymore and are ready to step in. Honorable Mention all-district senior point guard Kendall Morgan is one, and junior Sarah Huffman is another, who has surely improved each year on varsity playing amongst the talented guards her team has had the past few seasons.

Regan also expects several players from JV to play significant minutes as well as a few freshmen who made the cut for a team that went 14-2 last season but didn’t get to cut down any nets. He hopes the team can find success in new ways this year.

“We won’t be the biggest team on the court anymore, but we hope to be the feistiest,” he said. “The Concorde District is generally one of the best in the state and while everyone is chasing Madison, I think it will be a lot more competitive than people expect. Last year’s 14-2 team set the bar and this group is working to maintain our recent level of success.”

The Westfield Bulldogs retain ten players from last season–seven of them seniors that Noel Klippenstein says have come a long way in three years. Leading the Bulldogs will be forward Brooke Reed and wing Shreya Sivaram, and sophomore point guard Samantha Etzler will be tasked with running the offense with a year under her belt.

Fellow sophomore post Emma O’Connor will also provide experience in the paint. Klippenstein says she is confident in her returners to execute with confidence, and that this particular arsenal of players provide options the team hasn’t enjoyed in a few years.

“Our enthusiasm for being back in full swing is strong, but so is everyone else’s,” said Coach Klippenstein. “So let’s get some fundamentals going and get into some competition. It should be a fun season.”