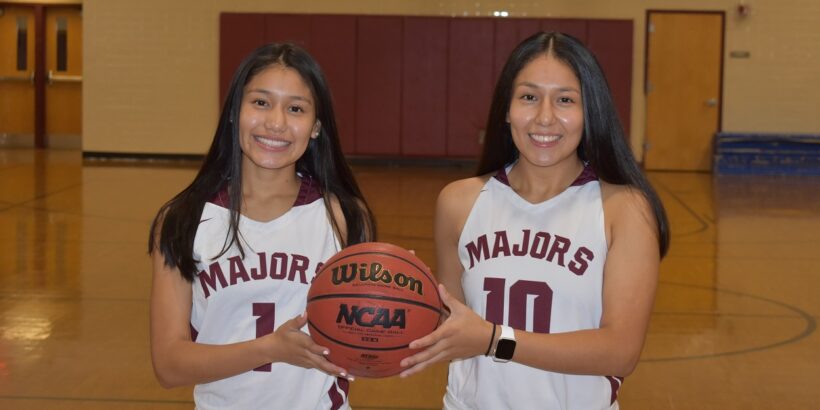 Litzy (left) and Isabella Lujan-Gonzales together averaged around 32 ppg in 2020-2021. Now, the dynamic sister duo is back to make some more noise.
Share List

There are lots of impressive sister duos tearing up the hardwood in Northern Virginia. You may not have heard of one such duo–Isabela and Litzy Lujan-Gonzales–but it’s a good bet their relative obscurity won’t last much longer.

All the Mount Vernon guard pair did last year was combine for over 30 points a game. Unfortunately that production came during a highly abbreviated season in the Gunston District, which had only four teams (T.C. Williams didn’t play) and saw a bunch of pauses due to COVID.

The Gonzales Girls still managed to give the region a taste of what is to come. Mount Vernon fell to W.T. Woodson in the first round of regionals, but Isabela gave us one of the year’s best highlights when she drained a WNBA three to send the game into overtime. In December, she hit a game-winning circus shot to defeat Lake Braddock.

Now a senior and her talented sister Litzy a junior, Isabela is excited Mount Vernon can be a serious factor in the newly-formed, eight-team National District. She’s ready to help the Majors grab some more headlines this year.

“We want to win district and and win some games at regionals,” Isabela told us. “I’m just really excited for my senior year and to keep playing with my sister.”

The girls come from a family that is used to grabbing athletic headlines. Her dad, Edwin Lujan, generated them as a premier soccer player in his native Bolivia. Their mom, Geovanna Gonzales, played basketball for a well-known team in Bolivia.

So there was little doubt Isabela, Litzy, and their older sister Maria would play sports growing up. The question is, which one?

“I played soccer in the third and fourth grade,” Isabela said. “I was pretty good and I liked it–good with my feet. My mom wanted me to try basketball but I really didn’t want to. She kind of made me try it and I’m glad she did.”

Litzy experienced no such hesitation, getting into basketball right away. All three of the Gonzales Girls were now basketball-first, opting to walk the athletic path of their mother.

“Our dad wanted us to play soccer this year at Mount Vernon, too,” a smiling Litzy said. “But we just really want to play basketball.”

“When Isabela was in middle school her mom saw her shooting some hoops at an open gym,” Thomas explained to us. “She knew Maria, who also played at NOVA [CC], and we figured out they were eventually going to Mount Vernon. The girls have been on my radar for a long time.”

Once a local girls basketball power back when Coach Thomas played for the Majors, Mount Vernon had struggled to recapture even a sliver of its past glory in recent years. So in 2016 the school hired Thomas, who had been there since 2008 as an assistant. When Isabella arrived in 2018, there was a lot of optimism surrounding the Majors’ future.

Isabela jumped right into the starting lineup as a freshman point guard. She had success, averaging in double figures, but it rarely came easy. The physical demands of varsity basketball was a lot to adjust to, with running the offense a huge challenge. Things came easier her sophomore year when her sister arrived at Mount Vernon.

“She {Litzy] really helped me a lot,” Isabela said. “She helped me with the ball-handling, and with her on the court with me I just felt a lot more comfortable. We just understand what each other is trying to do.”

“I think she was a lot less frustrated–I know I was,” a smiling Thomas added.

“We got only ten days of practice before the season and just nine games in. It was really tough,” Thomas said.

But the signs of improvement were there with Isabela a junior and Litzy a sophomore. The offense scored more points, and both girls were able to get out more in transition. Both handled the point as needed, but were also able to flourish in off-the-ball situations.

Now, with a full offseason complete and a full schedule of games imminent, there’s reason to believe Isabela and Litzy are on the cusp of putting up some ridiculous numbers and leading their team further into the postseason. The Majors should have enough experience with at least 3-4 other seniors on the roster, and some talented young guards to help further relieve the pressure on the Gonzales girls.

Win or lose, it’s fun to watch the sisters together on the court, as they compliment each other so well. Isabela says she prefers taking it to the rim and getting to the line, where she shoots around 80%. Litzy says she enjoys shooting from long range the most–like her sister she has a very nice stroke from downtown. Both sisters aren’t afraid to mix it up on defense, either.

After a successful AAU season, colleges are starting to notice them. Isabela got her first offer to play next year at Shenandoah University, and she recently took a visit to Eastern Mennonite. The combo guard is hoping even more colleges notice her during her senior season, and with Isabela a good bet to average around 20 points a game this year it’s extremely likely more offers are on the way.

The senior wants to stay fairly close to home, as she has a strong relationship with her sisters and supportive parents. And whoever ends up signing Isabela is probably going to have a really good chance to recruit another talented guard in the near future.

“I want to keep playing with my sister,” Litzy says.