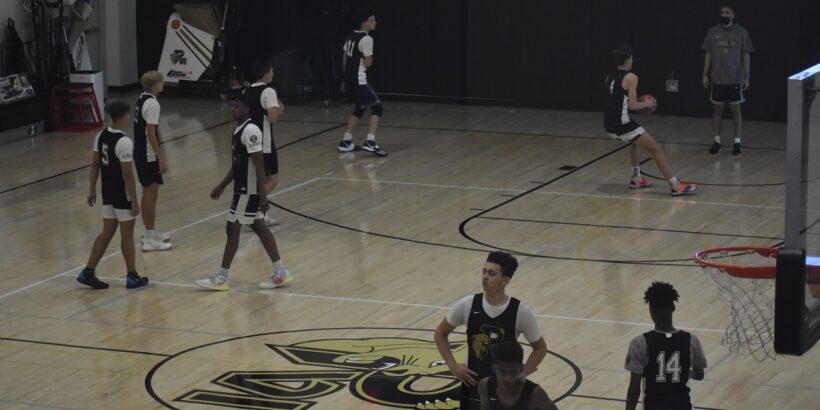 Considering their spectacular success, it may seem strange to view the boys and girls basketball programs at Paul VI as “programs on the rise.” But after visiting the Panthers’ amazing new campus in Loudoun County, it isn’t hard to imagine PVI ascending to even greater heights on the hardwood.

Northern Virginia’s premier basketball programs are now nestled in the Panther Activity Center (PAC) on the 68-acre campus off Braddock Road. The PAC has two gymnasiums attached to it: the main one where games are played and an auxiliary one that serves as the Panthers’ practice court. Boys coach Glenn Farello, also an assistant Athletic Director at the school, has an office and a nice aerial view of said practice court.

The football stadium is attached directly to the PAC with baseball and softball fields, a track, and tennis courts not far away. There’s a nice weight room, a team/film room, a training room–even a dedicated area to serve concessions above the main gym.

That’s just the athletic facilities. In short, the whole campus looks like it could be a nice, small college, never mind a high school. Farello said Brandon Slater, who starred at Paul VI and now plays at Villanova, even half-joked how PVI’s new facilities might be better than the Wildcats’.

“I feel very fortunate to work in a school like this,” said Farello, who also worked in Paul VI’s admissions office for nine years. “The facilities are top-notch but I don’t think we’ve lost that flavor of who we are as a school that we had back in Fairfax. Every sport has benefitted greatly from the upgrade in facilities, though, no doubt…take our practice gym here. It’s a college-regulation gym for our guys and very few get that opportunity on the high school level.”

We asked Scott Allen, who has won 14 straight VISAA state titles with his girls program, if kids are “blown away” by the facilities.

“Absolutely they’re blown away,” Allen said. “It’s definitely a great recruiting tool for our program, but it’s also great for just any person that’s interested in coming to Paul VI. You hear of our reputation academically and then you see what our buildings look like and you really want to go here.”

“Everybody likes the new thing but it’s really not all new,” he added. “The buildings are, but it’s the same philosophies we had before.”

The campus actually was christened last August, but it was a bittersweet opening. COVID forced remote learning for a good chunk of the 2020-2021 school year and it affected basketball as well. The programs played an abbreviated schedule but there was no formal league play in the WCAC, and neither program participated in the VISAA state tournament. Worst of all, the raucous Paul VI student body, “The Sixth (VI) Man,” wasn’t permitted to go to the games.

Still, Farello tried not to dwell on the negative last year.

“It was frustrating,” said Farello. “What a wonderful facility, and in year one we don’t get a chance to celebrate it the proper way. And yet, I feel very fortunate that we were able to do something. We did have some games here, and some practices–the kids got a chance to be on the court with their teammates. Trevor Keels got a chance to become an All-American in a shortened season.”

“Having said that, we can’t wait for the stands to be packed and The Sixth Man to be here, and the energy and enthusiasm that comes with it.” He then smiled, perhaps envisioning the brand-new gym packed to the limit with Paul VI partisans. “We’re definitely hoping to duplicate the noise level we had in Fairfax.”

Whatever the noise level, the Panthers will be tough to beat. The guys will be led by senior guard Dug McDaniel, a Michigan commit, and are further buoyed by strong Division I prospects like junior Deshawn Harris-Smith and sophomore Darren Harris. PVI’s freshman class looks like it can help immediately in the frontcourt–that’s a rarity for younger players in the guys game–and that also bodes well for the future.

As bright as that future may be, it’s all about right now in Loudoun, though.

McDaniel is starring on the Paul VI football team along with basketball teammate Brendan Robinson. The football team is 4-1 and the student body is having a lot of fun with it, especially with Homecoming slated for this weekend. Farello loves that McDaniel and Robinson are excelling on the grid iron.

“He [McDaniel] asked me in July my opinion on playing football,” Farello said of his star point guard. “I said, absolutely, go have some fun. Not that he needed my permission, as long as your mom says it’s okay and Coach [Juwan] Howard from Michigan…go have some fun.”

The outlook for this year is similarly positive on the girls side. A strong senior class is led by Manhattan commit Alyssa Costigan, Army commit Fiona Hastick, and the unsigned Jaelyn Talley, all major contributors last year. Loudoun Valley transfer Louis Volker looks like she will have much the same impact her sister Lee, now at Duke, had at PVI. Up-and-coming sophomore Laura Williams is 6’3″, and heralded freshman Riley Hamburger is capable of contributing right now. Before opting not to participate last year, Allen’s team had won 13 straight state titles, and there’s little reason to expect they won’t win another one this season.

Still, the challenges for each team will be great, as few teams in the country play a tougher schedule than the PVI teams. While Allen and Farello thus don’t have the time to look too far down the road, Northern Virginia hoops fans can’t help but wonder: with the new facilities and population increasing exponentially in Loudoun, could we be looking at an even stronger pair of programs in the near future?

“The two biggest summers of basketball camp we’ve ever had, we’ve had here in Loudoun,” Allen says. “The level of talent out here is surprising–and we’re hoping a lot of these kids choose to come to PVI.”

“We’ve got a great group of young kids right now [freshmen and sophomores] that are mostly Northern Virginia kids,” says Farello. “Across the board Loudoun may not be a hotbed yet from a basketball standpoint–but we’ve already gotten some really good kids from Leesburg, Gainesville, Loudoun and other places.”

“We’re just gonna keep this thing rolling as best as we can and hopefully continue to attract some of the best players around.”