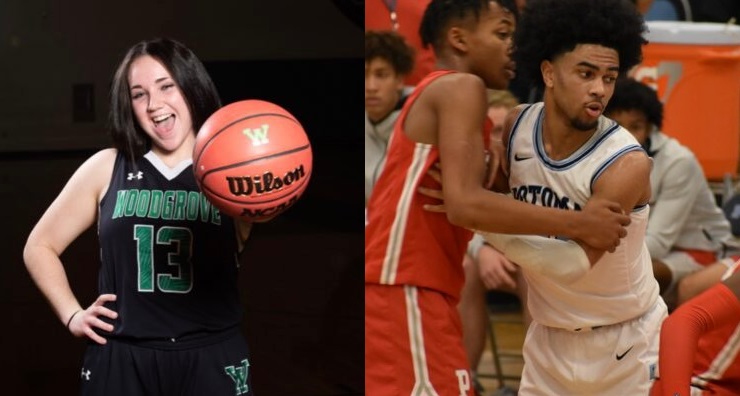 The Northern Virginia basketball community has suffered two great losses in the span of roughly ten days with the passing of Colette Baine (left) and Kyle Honore (right).
Share List

In early August I was at the funeral and memorial service of Brion Sumser, who owned Brion’s Grille at University Mall in Fairfax. It was a sad occasion of course, but in some ways almost a happy one. I was blown away by the great stories I heard of a man whose pride and joy were his children. While he is gone too soon, I took solace in the fact that he was proud of his legacies, and lived a full life well into his sixties.

Though they also leave behind legacies, I take much less solace in regards to the recent deaths of Kyle Honore and Colette Baine. They were still essentially children.

Honore, a former Potomac High standout, was struck and killed by a train on August 16th at Wingate University, where he was a freshman preparing to partake in his first season of college basketball. Baine, a senior at Woodgrove High, died on August 26th in her home due to a medical emergency. She had recently been offered an opportunity to play ball at Chatham University next year.

To be clear, I barely knew personally either individual. But for the second time in ten days I feel completely gutted.

At least weaker people, like myself, can marvel at their strength in the face of these terrible tragedies. That’s why I’m writing this column. I didn’t want to, to be honest. At some point I also know I have to put the Baine news on our news ticker. The very thought makes me nauseous, as it did when the news of Kyle’s tragedy broke.

Unfortunately I’ve felt this way before. I remember interviewing Mallory Brodnik a few years ago after she helped lead TJ to victory, not long after losing her younger sister Kelly to cancer. I didn’t have the strength to even ask her about her loss, and that’s really the moment I figured out I wasn’t really a strong person.

But what helped inspire me was the strength Mallory and her family showed that year. I have no doubt the Honores and the Baines will show similar strength in the face of these tragedies. They will no doubt inspire myself and others.

There’s nothing I can really say to console them or anyone else right now, but maybe I can offer something at least. The main reason I started novahoops.com was simply to document and remember the accomplishments of kids. The goal is for them, years from now, to look back and be able to show their own kids someday what they did in high school. Cruelly and tragically Kyle and Colette will never be able to do that.

I promise this website will honor them not just now, but in the years to come. Our Twitter profile picture has remained the same for years, and that’s for a reason. It’s not because of Hanna Oliver there, the talented Woodbridge Vikings guard who went on to play in college. Oliver is great, but that picture is there because of who she’s defending. It’s a subtle reminder that although the game goes on, we are obligated to always remember the ones we have lost. #21 is Nadia Davidson, another Northern Virginia basketball legend gone too soon.

Kyle and Colette were two completely different people who lived and played basketball on opposite ends of Northern Virginia, but I am struck by how similar they were. Two kids with infectious smiles who could light up a room in other ways besides their play on the hardwood. Two kids who were liked and greatly admired by their teammates, both high school and AAU.

Admittedly, I wouldn’t have known who either was without basketball. In the last few years COVID made it harder for us to get pictures of athletes, but yet we somehow still always had scores of pictures of Kyle on file. I remember thinking: “man, we don’t need all these Honore pictures” early last year, and then quickly realizing you could never have too many pictures of him. He was a special basketball player and we put him on the “cover” of our All-Senior Team this year for a reason.

Colette I saw less often in person, since I live near the Wilson Bridge and Woodgrove is all the way out in Purcellville. But I loved watching her play and saw her last varsity tilt live in Richmond, where she had 10 points and eight boards in the state championship game. Her basket back in February 2020 to help Woodgrove win the region remains one of the most memorable moments we’ve had in this website’s tenure. All that wonderful kid wanted to do after that victory was talk about her teammates.

Every year we’re sad when we lose high school seniors to graduation, and we realize we will quite possibly never again see them play basketball. This summer had already seemed like a season of loss upon the news that long-time coaches like Dianne Lewis, Jody Patrick, Pat Deegan, Doug Ewell, and Keith Honore were not going to roam the sidelines this winter. Coach Honore, Kyle’s father, was just eagerly looking forward to watching Kyle play basketball at Wingate.

The manageable sadness we face every year has turned to outright despair. Our summer of loss has turned into our summer of complete and utter heartbreak.

Novahoops.com offers our sincere prayers and condolences to the Honore and Baine families at this impossibly difficult time.