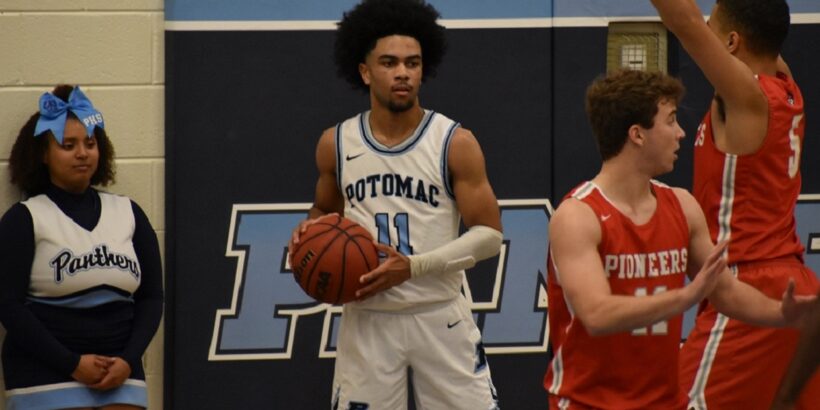 FIRST TEAM
G. Kyle Honore, Potomac
Honore finished his high school career with a fantastic season, switching his role between facilitator and scorer for the Panthers as needed. In February the Cardinal District Player of the Year poured in 39 points in an overtime win over Woodbridge, and the talented shooter, scorer and defender will continue his playing career at Wingate (NC) in the Fall.

G. Kenyani Lee, South County
As good as these seniors are, probably the guy we’d be most frightened to have to defend on an island (with no help) is Lee. Other stars eventually emerged on the Stallions this year, and Lee was happy to defer to them when it helped the team, but he still took over games when necessary. We saw Woodson box and one him one game–and it didn’t phase him one bit.

G. Elijah Easter, Independence
In the loaded Potomac District Easter was Player of the Year for a reason. The point guard has a nice little burst and quick hops that allow him to get separation and score at the rim, from medium-range, and from deep. He seemed to deliver 20 points almost at will, but also had a number of games where his passing and defense shone through.

G. Amr Areikat, Langley
Areikat saw more defensive attention than maybe anyone else on this list, and that’s really saying something. The 6D Region Player of the Year still managed to deliver offensively, like when he scored 37 points in a loss to Centreville in December. Tough and relentless, Areikat joins the Division III National Champions next year down at Randolph-Macon.

G. Braylon Wheeler, Hayfield
At the point, we wouldn’t be afraid to have Wheeler defend anyone in the DMV–public or private. Dug McDaniel, Devin Dinkins, whoever–we’d be perfectly fine with Wheeler defending ’em. The first mainstay of the Hayfield “Big Five” starting lineup, Wheeler goes down in history as one of our favorite players ever. He’s a great athlete, smart, a scorer, a passer, and as we mentioned, an A1 defender.

SECOND TEAM
G. Kyle Tang, South Lakes
As good as the other players of South Lakes were, when Tang was hurt or in foul trouble we often couldn’t help but wonder if the Seahawks could be victorious. Tang is just a rock-solid, unpretentious, smart point guard. He often led his team in scoring, but perhaps his biggest value was his fundamentally sound, relentless defense.

G-F. Samuel Cooley, South Lakes
Although, in fairness, the versatile Samuel Cooley was so good this year for the Seahawks, he could play a little point guard himself if necessary. The Concorde District Player of the Year, Cooley excelled at strong moves to the basket and burying the open three-pointer. Like Tang he always played within the offense, but his star showed through whenever he thought it necessary.

G. Max Lanham, Annandale
A good shooter with pretty decent height, Lanham has gotten better and better all four years for the Atoms. Lanham is one of those guys that just finds a way to get to the rim, and when he gets close his ability to finish creatively often results in a bucket. The George Long Tournament MVP has a good mid-range shot, too. We believe this is a guy college coaches should continue to monitor the next 4-5 years–we think Lanham still has a higher ceiling.

G-F. Cam Koscinski, Riverside
Maybe nobody could impact a game with his shooting faster than Koscinski did this year. In a tough district with lots of close games, Koscinski would often be the difference for Riverside when he got hot. On so many occasions he’d hit a couple threes and mid-rangers in just a short time. The tall wing has many other facets to his game, which Messiah University will enjoy next year.

F-C. Ben Hall, Loudoun Valley
It was just not a lot of fun trying to get shots against Hall and the Loudoun Valley defense this year. Sure, the 6’9″ senior protected the paint, but his agility made it tough for opponents’ jump-shooters from the arc and in as well. The school’s all-time leading shot-blocker will play at JMU next year, and he still has a ton of upside on offense and on the boards.

THIRD TEAM
G. Bo Kuhblank, Madison
Madison does it right, where it’s team first and individual second. A lot of years no Warhawk makes these teams because of it as a result. This year we think Bo Kuhblank deserves it (as well as Andrew Gorkowski, really). A point guard and first team all-6D Region selection, Kuhblank hit a lot of clutch shots this year, and his tough defense set the tone on the other side of the ball.

G. Jacob Thomas, Stone Bridge
Nobody would have batted an eye if we had made Thomas (or teammate Dylan Hundertmark) first team on this list, because you just don’t find a much better athlete than him. He’ll play football at JMU, but he had a fantastic basketball season for Stone Bridge as well. The fantastic playmaker flirted with triple-double-type games all year, getting it done both inside and the perimeter.

G. Ashton Pratt, Hayfield
We’re probably still somehow underrating Pratt by having him third team, but keep in mind there’s really very little difference (if any) between these top seniors in terms of talent. Virginia Union got a really, really good one in Pratt. He’s a dead-eye shooter than doesn’t force anything. He’s also a good defender who understands team defense. At 6’1″, he’s tailor-made for the next level.

G-F. Michael Cooper, Woodbridge
The tall guard from Woodbridge was to us one of the most impressive players around in 2021-2022. That’s nothing new, though. Cooper is a tall, explosive athlete who can score. We like a lot of the other stuff he brings to the table, though, like his ability to steal, rebound, and even block shots in the paint. Mr. Cooper is headed to Shepherd (WV) next year.

G-F. Jamie Ntiamoah, Riverside
The career blocks and rebounds leader for Riverside, Ntiamoah made great strides this year as the Rams made a deep playoff run. He put up a few 20-10 type games against tough opponents, but also impressed defending on the perimeter as well as the arc. A great athlete with some still considerable upside left, Ntiamoah will play for Catholic next season.

As usual, there were some tough omissions. We wanted Loudoun County’s Brendan Boyers on there, and Jimmy Daughtrey, his teammate, deserves recognition as well. You could easily argue Michael Montano-Best of Edison and Quincy Via of Lake Braddock should be on this list, and you wouldn’t be wrong. Northern Virginia is a very deep region–please recognize it’s no dishonor to be included on our list of HMs.