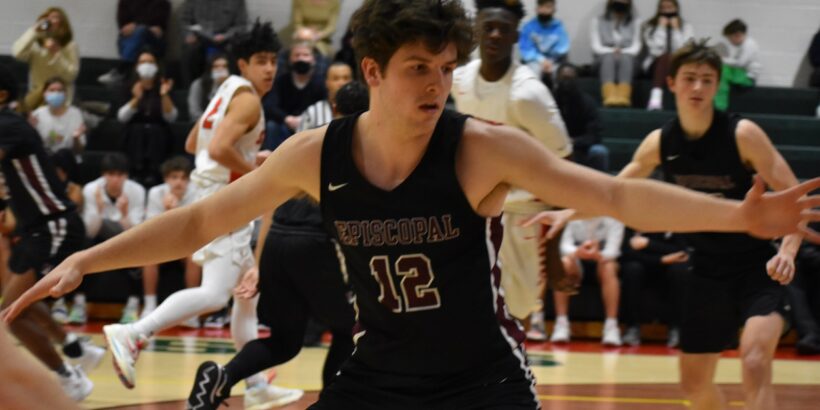 Episcopal's John Loughlin led the Maroon to the #1 seed in the IAC Tournament this season.
Share List

FIRST TEAM
G. John Loughlin, Episcopal
Episcopal to us didn’t seem as terribly deep offensively as it has been in previous years, which makes what Loughlin did on the year all the more remarkable. He’s always been a great shooter from long range (eight threes one game vs. SSSA) but he definitely elevated his game this season getting to the line and attacking the hoop. The First Team DI VISAA selection will play at Washington and Lee University next season.

G. Ryan Blakey, Fairfax Christian
Hampden-Sydney absolutely got a steal to land the small, but difference-making point guard Ryan Blakey. The co-VISAA DIII Player of the Year and the Defensive Player of the Year in the MPSC, Blakey can influence a game in so many ways. He’s lightning quick, can get to the rim and shoot, and his passing and pick-pocketing skills are well-documented.

G. Dug McDaniel, Paul VI
What’s more to say about McDaniel, who we’ll see playing for Juwan Howard and Michigan next year? The WCAC Player of the Year struck just the right balance this season, hitting clutch shots and carrying the offensive load, but yet using his fantastic passing ability to set up his talented teammates. PVI always has talent–this year they had a ton of chemistry too and McDaniel was a big reason for that.

G. Devin Ceaser, St. Stephen’s & St. Agnes
Talk about the ability to create one’s own shot. We were glad to see Ceaser get First Team All-Met in The Washington Post–he deserves it. With a quick burst and a quick shot Ceaser averaged around 20 a game this season. When he got hot perhaps no one could fill it up as quickly as him. Buffalo is going to love having him next season.

G. Saxby Sunderland, Flint Hill
I guess we really don’t need another prolific scorer on this team, but we’ve got one in Sunderland. Down the stretch this season the 6’3″ East Carolina commit averaged around 25 a game, filling it up from long range and at the rim. Can he be a successful, tall point guard in college? A lot of scouts think he can and we completely agree–we’ve always liked his handle.

SECOND TEAM
G. Paul Lewis, O’Connell
Understand that Lewis is second team purely for statistical reasons. On a very deep O’Connell team he didn’t need to be the man night in and night out, but he could have been. Lewis is one of the five best players in Northern Virginia, no doubt. The point guard and Vanderbilt signee was again incredibly clutch this year, such as when he poured in 27 points in a 54-52 memorable win over rival Paul VI.

G. Cavan Reilly, O’Connell
Reilly provided some nice long-range punch for the Knights in his first full season at O’Connell. He just quietly went about his business stretching the floor, hitting 40% of his shots from beyond the arc and providing double-digit scoring most nights. His shooting ability was a big reason for the Knights’ success this year. Reilly will join fellow O’Connell alum Wes Peterson at Delaware next year.

G. Ta’Zir Smith, Virginia Academy
Not sure where Smith is playing next year but whoever lands him is going to get one of the most talented guards in Northern Virginia. He’s not small and plays taller than he is–his smooth athleticism getting to the rim is enjoyable to watch. More often than naught the all-MPSC selection led his team in scoring, made all the more impressive considering VAA’s loaded roster.

G-F. Christian May, O’Connell
May was yet another senior Knight (along with David Onanina) who played an impressive role on a deep O’Connell team. He averaged 12 points and seven boards a contest and really did it all, defending quick guards up high and big men down low. A Towson commit, May can throw one down with authority and step back and bury the three.

G-F. Charlie Jackson, Episcopal
We were just so impressed with what Loughlin and his friend Charlie Jackson were able to do this season for the Maroon. Jackson, a First Team VISAA DI selection and Johns Hopkins commit, provided scoring punch but also did strong work on the boards. His height, ball-handling, and passing ability also let him occasionally deliver impressive assist numbers from the wing.

Obviously a ton of talent and some Division I signees in Honorable Mention. Congrats to all!