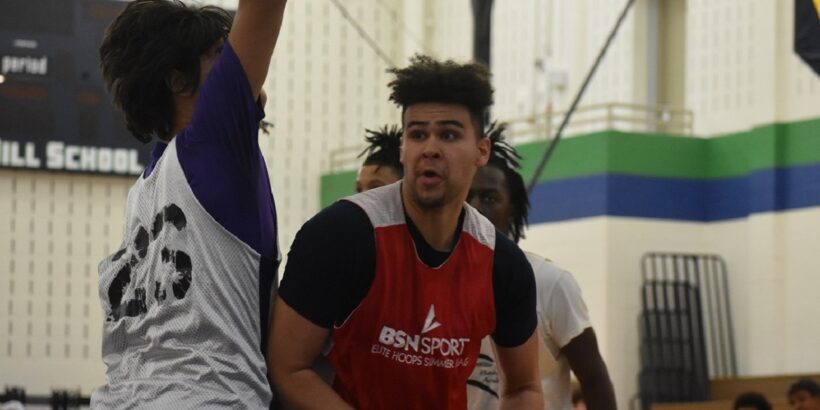 Senior Gibraltar Coleman is an American University commit known for his shooting, but he's also a crafty finisher at the rim as well.
Share List

Last year was a fairly normal season for many programs around the Northern Virginia area, but not Flint Hill.

“The COVID effect is still lingering,” long-time Flint Hill Head Coach Rico Reed told us. “Last year we had talent–I think we won 16 games, had a couple kids go on to play Division I basketball–but the cohesion wasn’t there.”

“It had an impact on our performance, but also the total basketball experience here.”

That was our impression as well. Some schools had COVID hiatuses last year–but Flint Hill’s seemed to last forever. The Huskies played a game on December 4th of last year–and didn’t play another one until January 11th. Flint Hill couldn’t practice for most of that time as well.

The Huskies did win about two-thirds of the games they did play, but the team was wildly inconsistent.

“Not only were we not playing games but we couldn’t gather,” Reed said. “So that also had an impact on relationships and just getting guys to commit to the system…and it affected consistency.”

It’s a different vibe now as Reed’s team should be able to enjoy an uninterrupted season this year. That was evident in the gym a few Saturdays ago, as the Huskies competed against themselves in hard five-on-five battles. Something was still missing, though. Something…big.

For the first time in recent memory, the Huskies lack a dominant, Division I-caliber center. In previous years Coach Reed has had the luxury of having 6’11” Qudus Wahab (Georgetown), 6’11” Noel Brown (George Washington), or 6’10” Reis Jones (Morehead State) on the roster. Not this year.

“First time in six years,” Coach Reed said when asked about the absence of a true center. “We’re going to be different, but I think it’s also going to give us an opportunity to capitalize on our versatility.”

The Huskies still have some height, and they’ve got two versatile wings that can provide some significant scoring and rebounding. Senior Gibraltar Coleman is at least 6’5″ and physically strong. The American commit made a name for himself with his lights-out shooting from beyond the arc, but he also is good finishing with either hand in the paint. Ditto for smooth 6’7″ junior forward Quinn Gorman. Like Coleman, Gorman can hit the outside shot but also finish at the rim and do some dirty work inside.

Those two will be able to torment opposing bigs trying to defend them on the perimeter. If they can stay out of foul trouble defending and rebounding down low, the Huskies will be tough to beat. As Flint Hill isn’t terribly deep in the frontcourt, strong junior guard Caleb Ihegihu will likely play a key role as well.

“He’s a versatile kid who can handle the basketball but also guard the post,” Reed said of Ihegihu.

While depth might not be a strength in the frontcourt, it definitely looks like it is in the backcourt.

“Our veteran guards are [seniors] Khaleel Abdullah and Steven Kennedy,” Reed said. “Those guys have been in the program and they’re the ones that are basically going to stir the pot for us…then there’s Everett Jones, who is just a sophomore, but is as confident as any guy in the gym.”

Those three alone are rugged, tough guards who should be able to handle the ballhandling and then some. Also in the rotation are senior wing and Amherst commit Nate Pabis, who seems like he has been around forever, and Centreville transfer Doyle Brown, a prolific shooter and scorer who should fill it up almost as easily in the MAC as he did in the Concorde District.

“Doyle Brown is going to inject so much energy and skill,” said Reed. “And then there’s Nate and his versatility and ability to shoot the ball. Leadership…everything that Nate does is an example of our school and its values.”

Veteran guards who understand their roles and can play multiple positions give Flint Hill a lot of lineup options against different opponents. The Huskies’ roster seems overflowing with kids who are unafraid of the moment and relish taking big shots.

Plus, there’s a lot of excitement on campus around the program. One thing the Huskies are excited about is the return of Flint Hill alum and former NBA star Dennis Scott to campus in December. Scott’s son plays for a team in Georgia who will come up and compete against Flint Hill in a four-team tournament.

Is a solid rotation, enthusiasm, and versatility enough to get it done in the formidable MAC, which boasts national power Sidwell Friends, Potomac School, and three other tough squads? Can Flint Hill finish near or at the top of the MAC without a dominant, true center to protect the paint?

Reed thinks the Huskies can, and we tend to agree.

“The key for us is definitely going to be how well we rebound and defend,” Reed said. “We’ll put a lot of emphasis on that.”

“And, we may do things differently,” he added. We may do a lot more trapping, and pressure and disrupt what offenses are trying to do. We’re definitely excited for a full season. Five is stronger than one…we’re going to commit to playing together as a team to try and accomplish some of the things traditionally we’ve been able to accomplish.”