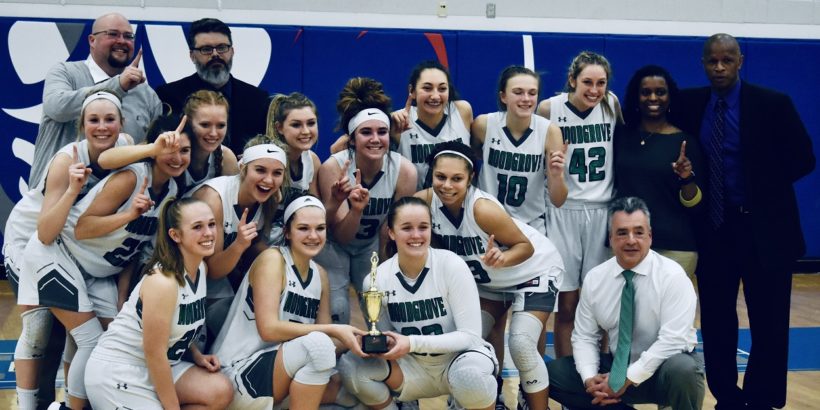 In a week of championship basketball, maybe the best game turned out to be Briar Woods-Woodgrove Friday night at Riverside. In it, a freshman converted in the clutch.

Woodgrove lost the lead late when Briar Woods senior guard Camryn Adkins stole the ball at half court and broke away for an uncontested layup, giving the Falcons a 46-45 lead with less than 40 seconds left.

With the Region 5C title on the line, the Wolverines remained calm as the crowd rose to its feet and erupted with shouts and applause as the game was coming to a close. On the ensuing possession, senior forward Sophia Coates dished the ball to freshman guard Colette Baine, who laid the ball in the basket to clinch a 47-46 victory that crowned Woodgrove as region champs.

“My team is awesome,” Baine said with a smile. Despite her notable basket, all she wanted to talk about was her team for its heart, and her teammates’ ability to work together.

“Before the game we found out that there was going to be a heavy Ashburn/Sterling crowd,” Woodgrove Head Coach Travis Coon said. “So I told them starting yesterday: ‘we’re going to walk into a lion’s den – we need to be mentally prepared.’ They answered the call and they played their butts off tonight.”

The see-saw game stayed close the whole way. Junior guard Katherine Fortin opened the scoring for the Wolverines after converting a jump shot. Briar Woods responded on the following possession, when Adkins (26 points) evened the score thanks to a pass from senior guard Marissa Almonte.

The Wolverines went on a 6-0 run late in the first quarter, putting them in the lead at 14-7. Sophomore forward Taylor Price shifted the momentum as she sank a three-pointer and then took a charge on the following defensive possession. Woodgrove led 14-10 at the end of the first quarter.

The teams traded baskets throughout the second quarter until Briar Woods Head Coach Raven Short called a timeout with 2:39 left in the half. After the timeout, the Falcons began a 6-0 run with the prolific Adkins accounting for all six points, drawing fouls on two consecutive possessions as she fearlessly drove to the basket.

On the following possession, Almonte dished the ball to an open Adkins, who drilled one of her three three-pointers on the night to tie the game at 22-22. The gym roared as the momentum had shifted in the Falcons favor after their rally late in the quarter to tie the game by halftime.

The Falcons would eventually take a 33-29 lead late in the third quarter. But the Wolverines would respond with an 8-2 run, which included back-to-back three-pointers courtesy of Baine and Mullen. Woodgrove’s run gave them a 37-36 lead heading into the final quarter.

The teams traded baskets again in the fourth quarter, but Woodgrove gained separation after Baine converted a layup with 1:40 left in the game, giving the Wolverines a 45-44 advantage. Coach Coon took a timeout with 1:06 left in the game to prepare his team for the final minutes of regulation.

“We (talked) about what we were going to do offensively if they went ahead,” Coach Coon said.

Despite Briar’s resilience, the Wolverines were able to secure their second regional title in program history, thanks to Baine’s go-ahead basket.

Coach Coon talked about how satisfying it was to see the team overcome adversity – earlier in the month seven Woodgrove players were out due to the flu.

“It feels wonderful,” Coach Coon said. “These girls fought hard. We got sick, we lost three games. They bounced back mentally and gave everything they had and now we’re ready to go to a state tourney and show em’ what we can improve.”