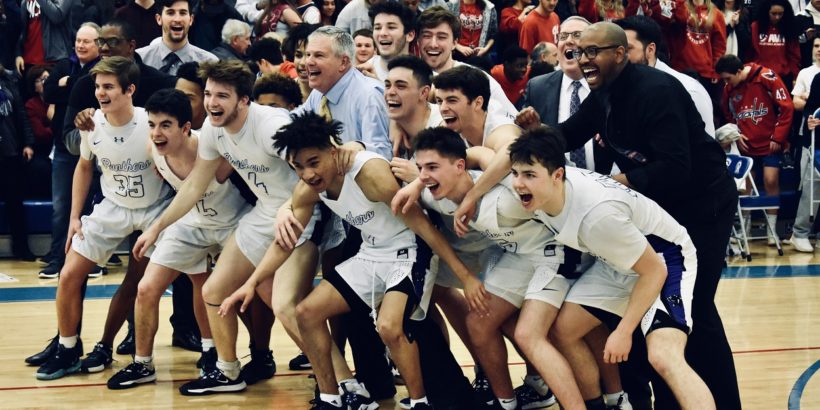 Drake’s 2015 2x platinum song, Back to Back, blared through the speakers in the locker room after Potomac Falls defeated Riverside 63-54 in the boys basketball 5C Regional Championship. The Panthers had just won their second straight regional title, and sixth in school history.

“I couldn’t even put it into words,” Potomac Falls Head Coach Jeff Hawes said. “If you would have told me two months ago that they were going to win the Region Title, I wouldn’t have believed you.”

Coach Hawes explained that after the team lost two consecutive games in mid-January to Freedom and Rock Ridge, the following day he gathered his team for a time of family bonding. The team session was complete with over $100 worth of popcorn and candy as they watched Hoosiers, an Oscar-nominated inspirational basketball movie. That Jan. 22 classroom session proved to change the course of the Panthers season, as they went on to win 10 of their next 11 games, including the region and district title.

“Half of the room shed tears,” Coach Hawes said. “People spoke up, and they just kept believing. Their effort picked up on a daily basis.”

The Panthers were elevated by double-doubles coming from senior guard Landon Hawes and senior forward Jalen Coker. Hawes recorded 21 points and 13 rebounds, while Coker finished with 16 points and 10 rebounds. Riverside was led by junior guard Michael Ziller who tallied 16 points and seven assists.

Riverside did not shy away from the top-seeded Panthers as the Rams set the tone early with a 4-0 lead thanks to baskets from senior guard Beau Everett and Ziller. Coach Hawes elected to call an early timeout to gather his team.

“I just didn’t want it to get too far away from us,” Coach Hawes said. “I didn’t want us to feel satisfied with earning a state berth.”
The Rams would increase their lead to 6-0 after the timeout, but the Panthers quickly put an end to their momentum as they went on a 12-2 run, establishing a 12-8 Panthers lead. Riverside called a timeout with 2:16 left in the first, after junior guard Nolan Levenhagen drilled a 3-pointer that caused the Panther Pit to start chanting, “this is our house!”

The Panthers continued their momentum after the timeout and would enter the second quarter with a 16-9 lead. The Rams did their best to erase the Panthers lead in the second quarter, including two three-pointers coming from senior guard Ty Reichard. However, Potomac Falls remained composed, and got a push from Levenhagen who finished the first half 3-3 from behind the arc.

The Panthers maintained a 30-22 lead going into the third quarter. Senior guard Jack Groscup opened the second half by beating a Rams defender in the post and sinking a jumper. Groscup’s basket would start a 6-0 run, and it seemed as if the Panthers were beginning to pull away with a 36-22 lead.

The Rams refused to quit as they orchestrated an 11-2 run, which cut the Panthers lead to 38-33 with 3:45 left in the third quarter. Sophomore forward Jamie Ntimoah accounted for six points during the run, including a play where he made a block on defense and proceeded to go coast-to-coast and earn a hard fought lay-in.

Despite the Rams surge, Potomac Falls still had a 41-35 lead as it entered the final quarter. With the regional title in sight, the Panthers started the fourth quarter on a 10-3 run, giving them a 51-38 lead with 3:34 left in the game. The Rams fought until the end, but they would eventually come up short, as the Panthers converted 9 of their final 12 free-throws to close the game.

“Every team carries a little something different,” Coach Hawes said. “We graduated some very good players last year, one of our best players ever. I heard people saying we were going to be 5th or 6th–we don’t think that way. It took a lot of work, a lot of preaching, a lot of psychology, but this was very rewarding.”

Coach Hawes also spoke about how much he’s enjoyed coaching his son.

“It’s never been about him, it’s never about me,” Coach Hawes said. “But as a dad, and the career he’s had – I think he was unbelievable all year. He’s worked his tail off, and there was the knee injury. It’s very rewarding.”

Potomac Falls will go up against Albemarle in the State Quarterfinals at Rock Ridge High School on Friday, March 6.