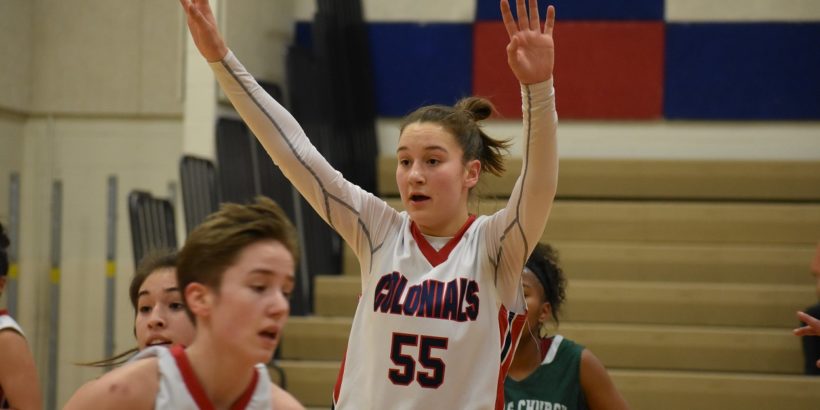 Mallory Brodnik ripped down 13 boards and scored 14 points, most notably the two that came at the very end.
Share List

Sometimes basketball, and life, can be quite ugly. But remarkable people shine through and that’s what senior Mallory Brodnik did against Falls Church. Brodnik’s floater off a pass from Abby Kim as time expired gave host Thomas Jefferson a dramatic 47-46 victory Wednesday night, keeping the Colonials in a tie for second place in the National District.

“We [sister Erin and I] always joke that I never make that shot,” Brodnik said after the game. “I was just really glad it went in.”

Below is video of the shot/final possession:

It was a nip-and-tuck game the entire way, with no team able to ever open up more than a couple-possession lead. The offense flowed in the first half with the teams combining for 57 points but the pace slowed down and the game got ugly after halftime. Tied at 45 with two minutes left, the only offense down the stretch prior to Brodnik’s heroics was a single free throw by Sierra Kennard.

“It was an ugly game after the first,” TJ Coach Liz Reed said. “But Mallory made the shot that really mattered in the end.”

While Jefferson has traditionally had little depth to tackle opponents, Brodnik had a fair amount of support on this night. Freshman Kailyn Pudleiner matched Brodnik’s point and rebound totals on the night, with both players finishing with 14 points and 13 rebounds. Senior guard Savannah Wilson added 12 points for the Colonials, while Mallory’s sister Erin led the team with three assists off the bench.

Pudleiner, Erin Brodnik, and Eleanor Kim are part of a promising freshman class that gives Jefferson (5-2, 11-6) hope for future success. But the focus is on right now for Reed’s team, which seeks to not only make regionals but to advance far in the tournament. That possibility depends on no small part on Mallory Brodnik, who constantly has more on her mind than basketball. She lost her other sister Kelly to cancer in September, and every point she scores on the court raises money to fight that disease.

Falls Church (3-4, 8-9) honored the Brodnik family’s efforts to raise money to fight cancer by wearing purple warm-ups before the game, as many teams have done. The Jaguars only played five players Wednesday night and have been beset by injuries. They’ve managed to still win games but the loss was the Jaguars’ fifth defeat by two points or less. “It’s been a tough year,” said Jaguars coach Janice Pritchett. “We’ve got to learn to win these close games.”

Junior guard Amari Faust led the way for the Jaguars with 13 points, while sophomore guard Sofia Faloni added 11. The senior Kennard had a double-double, with 11 points and 11 rebounds.