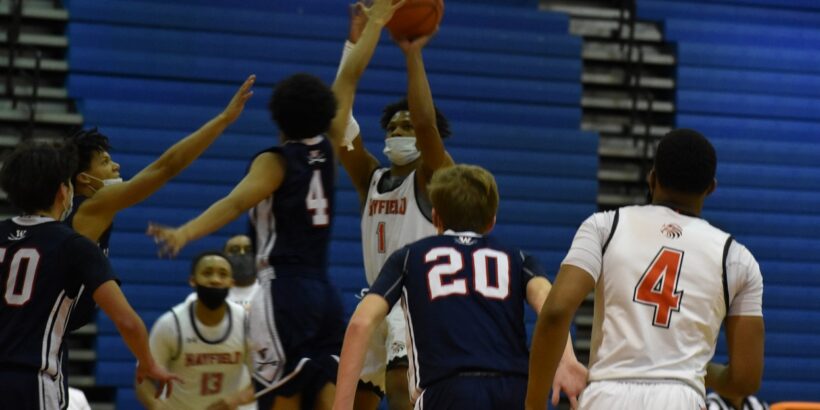 “Closers” in sports are more commonly associated with baseball than basketball, but on the hardwood it’s always nice to have a guy who can put away other teams in crunch time.

The Hayfield Hawks have one of those guys in junior guard Braylon Wheeler.

On Saturday evening at the Hawks’ Nest, Wheeler answered a 10-0 third quarter W.T. Woodson run with four three-pointers and 17 second half points, as Hayfield defeated the Cavaliers 56-51.

“He’s our leader, our point guard, our finisher, our closer–all of that,” said Hawks Coach Carlos Poindexter of Wheeler, who finished with 24 points total. “When he’s got it going on like that he’s one of the toughest guards in the whole state.”

Even with Wheeler catching fire in the second half, Poindexter’s team needed a bunch of players to step up at various times against the scrappy, well-coached, and always-dangerous Cavaliers. Early on Ashton Pratt was the guy, hitting two three-pointers as Hayfield raced to a 10-2 lead.

Woodson cut the Hawks’ lead to 14-10 after the first quarter and then succeeded in dragging the high-flying Hawks, who averaged around 68 points a game coming in, into a low-scoring, defensive second quarter. Each team only scored six points, and the halftime score was Hayfield, 20-16.

Hayfield scored the first four points of the second half, but then the Cavs made their run. Senior swingman Devin Cuviello buried two threes and hit two free throws to spark the 10-0 rally, giving his team its first lead of the game at 26-24.

Wheeler squashed the visitors’ momentum, burying a three to give Hayfield back a 27-26 lead. Then, when Woodson scored the next two baskets, he hit another trey to even the score at 30. A basket on an offensive rebound soon after by Hawks sophomore Greg Jones gave Hayfield the lead once more.

The Hawks (8-1) would not trail again, thanks in no small part to their “closer.” He opened the fourth quarter with a driving bucket and buried another three-pointer a few minutes later. Hayfield eventually opened its lead to double-digits and while Woodson closed the deficit late, the contest was decided.

As good as Wheeler can be, the Hawks have been getting wins with their balanced offense this year. On this night Pratt, who has led the Hawks in scoring often this year, finished with 14 points. Jones had a great all-around game with six points, 11 boards, and five assists.

“Even though we can rely on one person [Wheeler], I do like when it’s balanced and spread out,” Poindexter said. “It makes us harder to guard when we have four, five, six kids scoring 8-12 a game. This team has that.”

The Cavaliers (5-4), a team known for their balanced offense as well, were led by Cuviello and junior Alexander Klein, who each had 10 points apiece. Eight Woodson players in all scored, but the game was lost with uncharacteristic defensive lapses late. Hayfield hit eight three-pointers total, and Woodson defenders failed to close on Wheeler and company well enough in crunch time.

Hayfield rolls on, its only loss coming to #2 Lake Braddock by a single point. Are the young Hawks, who don’t feature many seniors in their lineup, regional or even state contenders this season, a year ahead of schedule?

“We make plays, but as a whole our defense has to get better,” Poindexter said when asked what it will take for his team to make a postseason run. “But us picking up the pace of the game, trapping…we like that. And we have to continue to close out games. Taking care of the basketball, too. The fourth quarter is winning time, and we still have to get better then.”