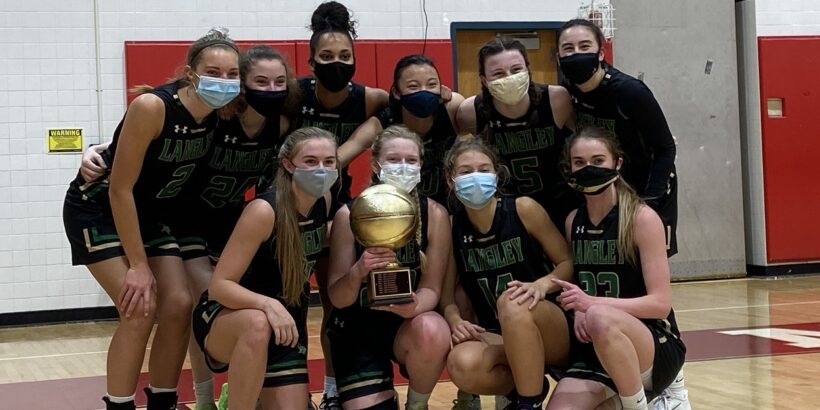 To the victors go the spoils of war, and to the Saxons goes the Rotary Cup by virtue of their victory over rival McLean.
Share List

Through hot shooting and a balanced offensive attack, Langley retained the Rotary Cup and topped host McLean 59-34 to sweep the rivalry this season.

One of the best rivalries in the area, though without the student sections this year, still brought excitement for the players.

“I know the kids are just as excited as always,” said Langley Coach Amanda Baker. “Student sections are fun, and they look forward to it, but I know they’re really happy to be playing period. They have a lot of friends on McLean, so to play with their friends, against their friends, was really great too.”

Happiness was certainly abundant for the Saxons, especially as junior guard Caitlyn Shumadine began to catch fire early in the game.

“You’ve gotta focus on warm-ups and as long as you’re focusing, I believe you can make anything,” said Shumadine, who hit two quick threes in the first and finished with five total for 15 points. “A heat check was good. I needed that, but I like the two threes right away.”

Shudamine transferred into Langley this year. “It’s a really fun team, they’re very spirited. They took me in right away, they’re very nice and I knew a lot of them which helped. I like the way they play, I love playing with them,” she said about joining the team.

A great shooter, she has amplified their offense with her ability to spread the floor.

“The last few years we’ve had a tough time getting into the lane because teams could really sag off, and she really gives us another dimension to our offense. And now that she’s healthy and getting in her groove, she’s going to be a really great addition,” said Baker.

Langley only led by two at the end of the first, but would extend its lead as the night went on. Holding McLean only to three points in the third quarter was key to sealing the deal and the win.

Junior guard Annabeth Holsinger led the charge defensively, notching three steals on the night against McLean’s young guards. Inside, forwards Taylor Maguire and Keelin Byrne combined for 13 rebounds and were around loose balls all night.

Langley displayed patience against the McLean zone all night, resulting in a few beautiful assists. Senior guard Summer Thomas led the attack in the second half, doing a little bit of everything with four points, three rebounds, two assists, and a steal.

McLean has had to fare this season without senior forward Kendall Jones, out due to injury. Jones’ presence is surely missed as the Highlanders continue to get in their groove and compete in district play. Though with young guards like Bremser and Krikorian, they have much to look forward to.