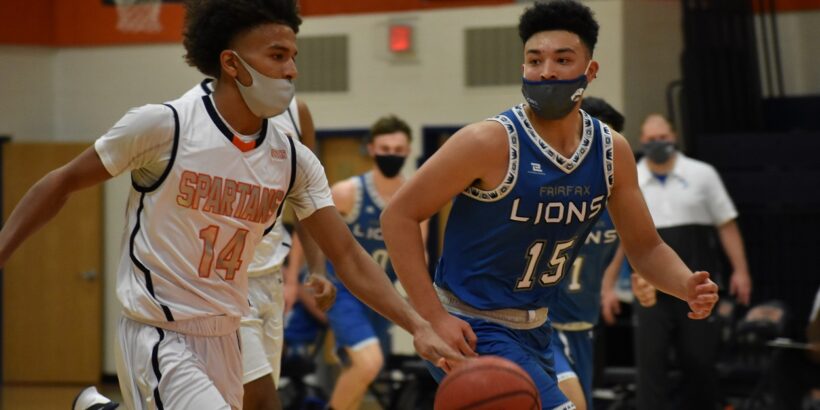 West Springfield junior Omar Chambers, who led his team with 16 points, gets a steal and run-out in the second half of Wednesday's win over Fairfax.
Share List

Down 24-15 at half, the Spartans looked like a completely different team after halftime, however, en route to a 50-42 Patriot District victory.

“We just made a few adjustments and I told them they needed to play harder and get their shots,” West Springfield coach Durmia Marshall said.

The difference was night-and-day. In the first half Fairfax gave star junior forward Gibraltar Coleman extra defensive attention, and it seemed to gum up the entire West Springfield offense. The Spartans (3-2, 5-3) were 6-15 from the field in the first half with no shot attempts for Coleman and no trips to the free throw line as a team. In the second half, Marshall’s team was 13-21 from the field and went to the line ten times.

The energy after halftime was evident right away, and it led to a 15-5 West Springfield run to start the second half. The run was capped by junior Omar Chambers’ steal and bucket, which made it 30-29 Spartans. That was a theme of the second half, as Chambers and the Spartans’ defense forced turnover after turnover from the youthful Lions.

Still, Fairfax stabilized things and led 37-35 midway through the fourth quarter. Then came another run by the home team. Junior forward Ali Sharif grabbed an offensive rebound for a score. Chambers got another bucket off a turnover. Coleman found Chambers open for a three-pointer, then after more Fairfax turnovers Chambers found Sharif open for another basket.

The 9-0 Spartans run essentially sealed the game, with sophomore guard Jaylen Surell icing it with four clutch free throws down the stretch. Chambers led the way with 16 points and five assists, Sharif had 12 points, 10 in the second half. Both juniors came off the bench to start the game.

The four Spartan seniors who were honored before and after the game made an impact as well. Brayden Smith had two key second half buckets, Cooper Johnson was perfect from the field, and Benayas Anteneh and Reed Dexter played some quality minutes. Coach Marshall singled out Dexter after the game.

“It doesn’t show up in the box score, but he is so key for us,” Marshall said of Dexter. “We have a young team that needs leadership and he provides it and plays good defense as well.”

The Lions were led by sophomore Margad Choijilsuren’s 15 points. Choijilsuren scored all of Fairfax’s 10 points in the fourth quarter. Juniors Mason Ackerman and Kaden Horner added eight points apiece for the visitors, who suffered their second loss in four days to West Springfield. On Saturday the Spartans edged the Lions by a point in overtime.

“Always going to be a battle in this district and with Fairfax,” Marshall said. “There was definitely some familiarity there tonight.”