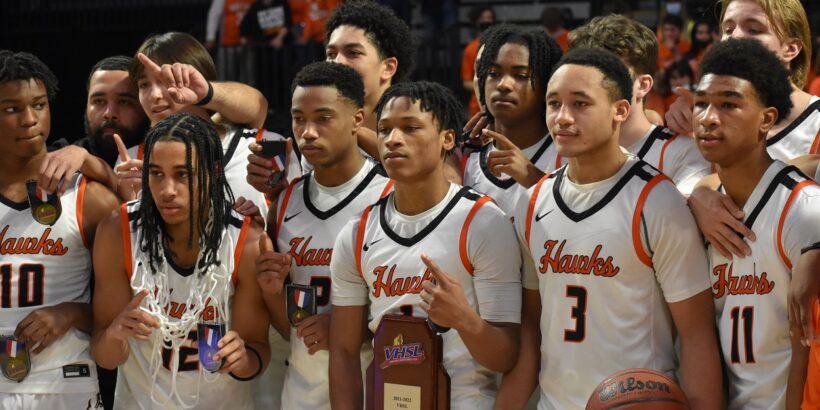 In the fall Hayfield Coach Carlos Poindexter gave senior point guard Braylon Wheeler a simple message: “If you lead us to a championship, I’m gonna put you in the Hall of Fame.”

Not sure how the Hayfield Hall of Fame works, but pretty sure they’ll make room for Wheeler and his teammates maybe as soon as Monday morning.

The Hawks’ goal has been clear since the end of last season: win a Class 6 state championship. On Friday afternoon at Siegel Center the Hawks accomplished that goal, defeating Battlefield 67-47. It was the culmination of an amazing long season for the Hawks, who finished the year at 32-0.

Battlefield certainly was not intimidated early on by Hayfield’s record, as just this week the Bobcats had defeated another undefeated team, Patriot, to get to Richmond. Battlefield looked fantastic early, shooting almost 64% from the field en route to an early 15-9 lead.

That lead dwindled to 18-16 by the end of the first quarter, though it seemed Hayfield was in for a challenge.

“We didn’t start off the greatest,” said Poindexter. “We had some guys in foul trouble…I had to go deeper into my bench in the first quarter than I did in all the previous 31 games.”

Hayfield settled down and started getting into the paint more on offense in the second quarter, and led 33-29 at halftime. Then, coming out of the locker room it was all Hayfield.

“We stayed together throughout the storm,” Poindexter said. “I knew that in the third quarter we were actually going to take over the game…once we got settled down and started executing…playing defense.”

“We knew that the third quarter was their quarter,” Bills said.

The Hawks held the Bobcats to 10 points in the third, while burying three three-pointers themselves and going a perfect six-of-six from the line. After the quarter, the Hawks led 54-39.

Battlefield (20-7) fought ’til the end, but simply didn’t have enough firepower to mount a comeback against one of the better teams to play in Northern Virginia in recent years. Battlefield could not sustain its offense against the withering Hawks defense, which forced 24 Bobcat turnovers on the afternoon.

Junior Greg Jones led the Hawks onslaught with 23 points, including a fourth quarter dunk that brought the droves of Hawks fans in attendance into a frenzy. David King had 12 points and seven rebounds, while junior DJ Holloway added 11 and Wheeler 10.

It was a day to remember for not just the Hayfield basketball team, but for the Hayfield community in general.

“It’s been big for this community,” Wheeler said. “I had a person who played here in the 60’s telling me how they’ve been following the team.”

And now people will continue to follow Wheeler and the Hawks in the years to come–because there’s a spot in the Hayfield Hall of Fame for them.