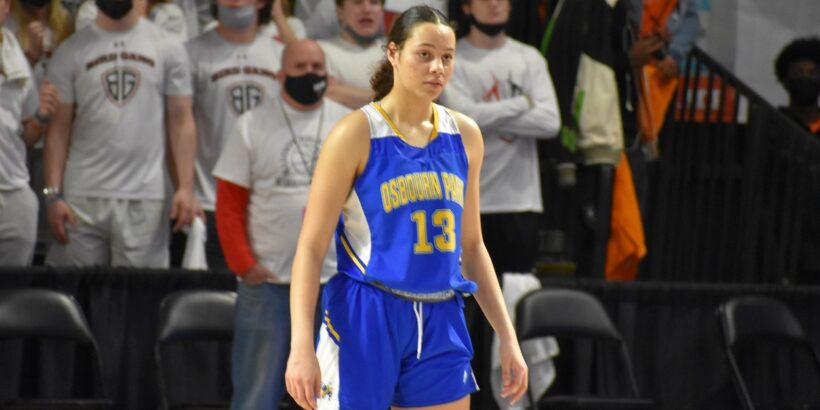 STARTERS
F-C. Alexandra Brown, Osbourn Park
As talented as Osbourn Park was this year with its multitude of weapons one through four, the Jackets could often count on their freshman center to deliver them a key bucket when they needed one. Alex Brown delivered double-double type games right out of the gate, doing ample offensive damage in the post and with mid-range shots. At six-foot-plus she alters shots on defense, moves on the perimeter well, and even pushes the ball downcourt when necessary. Brown already is no stranger to double-teams–soon those might be mandatory to stop her from getting 20 a night.

F. Georgia Simonsen, Robinson
We’re going to try to put together some video show intros this offseason, and what we really would like to put in there is a Georgia Simonsen rejection. She had some this year where we legitimately feared the rejectee was seriously injured. The Rams’ brilliant young power forward influenced the game that way, to be sure, but she also was a massive weapon in Robo’s high-low offense with Caroline Shimp. Relentless down low, Simonsen delivered some big scoring games, like when she had 21 against Edison as the Rams won an Occoquan Regional title.

G-F. Nyla Brooks, Bishop Ireton
We don’t really pay much attention to player rankings, but pretty sure Brooks is a nationally-ranked prospect for the Class of 2025. Watch her play and it’s obvious why that is. The word “smooth” repeatedly comes to mind as you watch her drain shot after shot against top notch competition. Brooks has great range and great length–we love the way she keeps her dribble protected and low right until the moment she explodes at full length to the hoop. Defensively she’s a nightmare when Ireton scores and sets up in the press. Brooks already has offers from a bunch of Division I schools, to include Georgetown.

G. Sarah Chawki, Edison
Chawki put up some nice statistics in her freshman campaign, but what really impressed us was her confidence, assertiveness, and aggressiveness. The shooting guard basically displayed no fear from the get-go, taking 13 shots on opening night. On bad nights she missed a lot of shots, but she never, ever hesitated to take them. And even on bad nights it always seemed like she would deliver when it really mattered. With a powerful dribble and range well beyond the arc, the second team all-National District selection displayed star potential. Have to mention Edison’s very talented freshman class here (McIntyre, Massey-Thompson, Heiner, Morgan Robinson)–heck, you could argue Jamieson McIntyre deserves to start for this team as well.

G. Riley Hamburger, Paul VI
Hamburger is going to be a star. Paul VI comes at you defensively with waves of able defenders, but even in the nationally-ranked Panthers’ vaunted defense, Hamburger still managed to stand out with her length and athleticism. Her long arms harass opponents and get in the passing lanes continuously, and her quick feet enable her to defend even the fleetest of foot. When she pushes the ball in the open floor on offense, look out, and Hamburger has a solid stroke that should only get better and better. Love the fact she can contribute significantly on the boards as well.

RESERVES
G-F. Anya Rahman, Langley
Rahman filled a huge role as a viable scoring option for Langley behind AB Holsinger and Caitlyn Shumadine. Sometimes Rahman was hardly the third option, such as when she scored 24 against Falls Church with six three-pointers. Fundamentally sound and solid defensively and on the boards, the second team all-Liberty District selection will get a chance to fill a leadership role for the Saxons in the years to come.

F-C. Elizabeth Thornton, Loudoun Valley
From day one it was obvious Thornton was going to be a key part of Loudoun Valley’s offensive and defensive game plans this season. At around six feet tall and a great athlete (she’s also a talented soccer goalie), Thornton was a tough obstacle to bypass at the top of Valley’s 1-3-1 defense. She runs the floor well and was more than capable letting the Vikings’ offense flow through her in the high post and elsewhere this season. A good passer and a double-double threat on any night, Thornton figures to become an even bigger weapon as she gets physically stronger.

G. Zaria Gaskins, Christ Chapel
Gaskins is a smallish guard who knows how to play the game. A first team all-VISAA Division III selection, Gaskins used her quickness and athleticism to keep the young Lions in games against far more experienced opponents. Her 20 points and eight rebounds against Walsingham Academy led Christ Chapel to the VISAA DIII Tournament Final, and Gaskins racked up assist numbers all season as well. We loved her willingness to sacrifice her body against bigger opponents on defense, and she was always a threat to pick the opponents’ pockets if they were too careless with the ball.

G-F. Emma Komaily, W.T. Woodson
Wings with size that can shoot are a much-appreciated commodity in today’s game, and Komaily offers that and then some. She can fill it up from beyond the arc and hit from long range off the dribble. Against South County she hit five threes and scored 26 points. The fact that she can rebound well makes her valuable as well–new Cavs coach Le Towe can use her as the four or five in a small lineup, or play her alongside bigs as the two or three.

F. Emerson Mustard, Chantilly
A tall forward who can run the floor and hit threes, Mustard had some impressive offensive games for the Chargers this year. We saw her score 18 points in a half versus Justice in the Boltball Tournament, riddling the Wolves for buckets in the paint and from long range. She can run the floor and play defense, voted first team all-defense in the Concorde to go along with her second team general honors. Have to mention fellow Chantilly frosh guard Daniya Brown here too–Brown and Mustard give the Chargers a strong foundation in the seasons ahead.

G. Kennedy Parrott, Centreville
More than one coach told us Parrott was the best freshman they saw all year. If she hadn’t suffered an injury to wipe out some of the latter part of her season, she’d probably be a “starter” on this team. A guard with good length, Parrott can really do it all offensively. She can finish with either hand at the rim, hit from long range, and what we really like: stick the mid-range jumper when that’s what the defense gives her.

G. Catherine LeTendre, Potomac School
LeTendre was a big part of the Panthers’ 22-2 campaign, averaging double figures and running the offense for Mike Hutton’s team. She was adept at attacking the rim, and seemed to step up most in big games against some of Potomac School’s tougher competition. We watched her pepper Episcopal for 26 points, and she averaged well into double figures on the year. She’s willing to rebound, and thus can trigger fast breaks herself. LeTendre is one to watch for Potomac School, which very well could be a program on the rise.

G. Olivia Stafford, Yorktown
Yorktown guard Olivia Stafford racked up awards in the Liberty District, taking home Rookie of the Year, All-Defensive Team, and Second Team honors. Yorktown won over 20 games with its defense, and Stafford was a big part of that. She constantly delivered multi-steal games, including seven in a game versus Washington-Liberty. The athletic Stafford, also a field hockey standout, can score too.