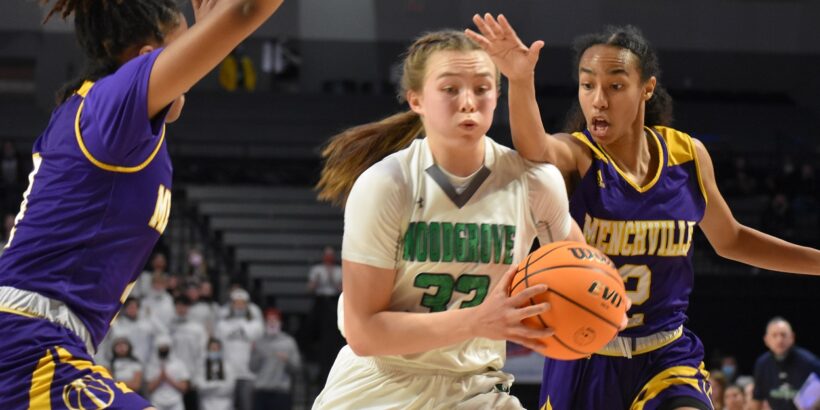 Woodgrove's Sadie Shores ran the offense, but was also a prolific scorer for the Wolverines.
Share List

STARTERS
G. Sadie Shores, Woodgrove
Here’s a dynamic point guard that will play at the next level. Shores has nice size and athleticism that allows her to speed/power her way to the rim, almost at will. The Wolverines are loaded with shooters–but Shores can also fill that role off-ball if necessary. If you sag too much off her to limit her drive, she’s capable of hitting threes. Not too many weaknesses are in her game, if any. The first team all-state selection is pretty adept at playing defense as well.

G. Ava Sawi, Episcopal
Episcopal had a tough year in the ISL top division, which boasted nationally top-ranked Sidwell Friends, but Sawi thrived despite constant extra defensive attention. A fantastic athlete, Sawi also demonstrates remarkable skill, especially pulling up for a smooth jump shot at close to full throttle. Girl can flat out score. We saw her score 37 versus Potomac School in a losing cause–and to our recollection that was in only like 26-28 minutes. A slightly under-the-radar prospect during COVID, that won’t be the case for much longer.

G-F. Sarah Pritz, Lake Braddock
The Patriot District Player of the Year sort of snuck up on us this season. She grabbed our attention with a six assist performance in the season opener, and then became a double-double machine (scoring and rebounds) as the year progressed. She does a little bit of everything–perfect for any lineup–but don’t be fooled, she can dominate games with pure aggressiveness. Her physical strength for a sophomore is impressive. Pritz can explode to the hoop and shoot over smaller opponents from mid-range, and she’s a total team player. The Bruins’ star is definitely one to watch going forward.

F. Keira Scott, O’Connell
Scott already has the finesse and footwork necessary to succeed at the next level. She’s very long at well over six feet tall, and knows how to use her length to not only go over opponents, but around them as well. Though Scott has an array of post moves, the Knights sophomore can play wing and drain the three-pointer. She blocks a lot of shots on defense, as you might guess. Had some nice scoring games this year, but as her strength, consistency, and coordination continue to improve, “nice” will turn into “ridiculous.”

C. Laura Williams, Paul VI
Boy, could Williams rack up rebounds. Could be wrong, but seemed like in the state championship game she had six or seven rebounds in like three minutes of action. Williams is very tall, but surprises opponents with her tenacity and physical strength in the post. She’s still developing offensively, but still had some good offensive games on a loaded PVI team, including an 18-point one. Defensively, she’s an A1 interior defender that also can guard opponents outside the lane.

RESERVES
F. Alysa Carrigan, Tuscarora
Carrigan is known around the area as a fantastic athlete. She’s a champion high jumper who at 5’11” blocks shots and attacks the basket down low on offense. Her ability to do that is irritating enough for opponents, but frighteningly for them Carrigan seems to be expanding her game rapidly. She has clearly improved since she burst on the scene as a freshman–her ball-handling, footwork, shooting, and ability to attack from outside the post have all clearly gotten better. If that continues, we’re looking at a possible Division I player here, folks.

F. Hope Drake, Briar Woods
Drake could easily be a starter on this team, especially considering her and the Falcons’ strong finish to the season. Her crowning sophomore moment was a 28-point, 20-rebound performance against Glen Allen at states in a Briar Woods overtime victory. We love her versatility–she rebounds to the tune of double digits, so we could play her as the 4 or even 5 in a small lineup. We could play her as the 2 in a big lineup, or we could have her set up the offense as a point forward. Don’t foul her unnecessarily if you can help it; Drake almost never misses free throws.

G-F. Madison McKenzie, Gainesville
Gainesville was way better than you would expect a first-year program to be this season, and McKenzie was a huge reason why. The athletic guard ended the season in the regional playoffs the way she began it–with a 25-point game. McKenzie can do a lot of damage beyond the arc with her pretty shooting stroke. She also does a lot of damage defensively, picking opponents’ pockets and then seemingly effortlessly gliding down the court for the bucket. The Cardinals are going to be very good very soon and we expect McKenzie to reach another level herself very soon as well.

F-C. Nina Jenkins, Word of Life
Jenkins quietly had a very good year for Word of Life, which played a very tough schedule mostly out-of-area. Jenkins, a six-foot power forward, controlled the paint, blocks, and elbows consistently for WofL. We saw her go for 16 points and 16 rebounds against Virginia Academy, and those kind of double-double games for her were commonplace. Very strong and a crafty positioner, Jenkins knows how to work the offensive boards and create space for her guard teammates. She’s a rock on defense as well.

F. Ella Negron, Patriot
Negron isn’t as tall as Jenkins, but she produced similar statistics at the four for the Pioneers. She’s one of our favorite young players in Northern Virginia. You would think she was a senior the way she smartly positions herself at the elbows and in the post. With a sweet left-handed mid-range shot and a knack for effectively sealing her opponent as she attacks the rim, Negron had some big scoring games in 2021-2022. The first team all-region selection is a very good rebounder as well, and we love her ability to whip a precision pass to a teammate.

G. Ella Mahaffey, Riverside
We needed another point guard on this team, and so immediately thought of Mahaffey. She’s tall for her position and uses that to her constant advantage–getting in passing lanes, effortlessly striding down the court, and delivering assists around and over defenses. Really good in transition, Mahaffey also manages to get to the rim in halfcourt, often with a spin, or drain the outside shot. She doesn’t appear to have any serious weaknesses in her game, so as she gets physically stronger the sky’s the limit.

G-F. Kaylie Avvisato, Riverside
Well, if you think of Mahaffey, then you just have to also think of Avvisato. When Mahaffey attacked the lane, Riverside’s opponents were wise if they didn’t leave Avvisato alone to help. So many times she would make defenses pay with a three-pointer from the corner. A dead-eye shooter, Avvisato had a bunch of 20 point-plus performances as the Rams had a winning season. She’s not just a shooter, either. A world-class softball prospect as well, the sophomore has the athleticism to consistently do a good job on defense and the boards.

G. Kenneah DeGuzman, Freedom-Woodbridge
DeGuzman was one of the area’s top scorers in 2021-2022 after transferring from Potomac. She averaged about 20 points a game despite the ample attention given to her by defenses. A very quick point guard, DeGuzman can get to the rim first and foremost with her expert handles and explosiveness. She can also shoot from outside, averaging over two three-pointers made per contest. She can be very hard to get past on defense to boot.

G-F. Simone Pendleton, Falls Church
Pendleton has been such a good varsity player for so long now, we had to check and make sure we were right listing her as a sophomore. Yup. This season all the talented wing did was average 17 points per game and 12 boards per game, while also being selected for the National District All-Defensive Team. Pendleton is a good athlete, but uses her ballhandling ability and patience to methodically get to the rim. That and basketball smarts allow her to play some point forward in the Jaguars’ offense, when she’s not playing off the ball. Falls Church has a very bright future with Pendleton and a strong sophomore class bound to get better and better.

Easily could have put a few more girls on this team, but here’s some more standouts we’ll be watching closely going forward: