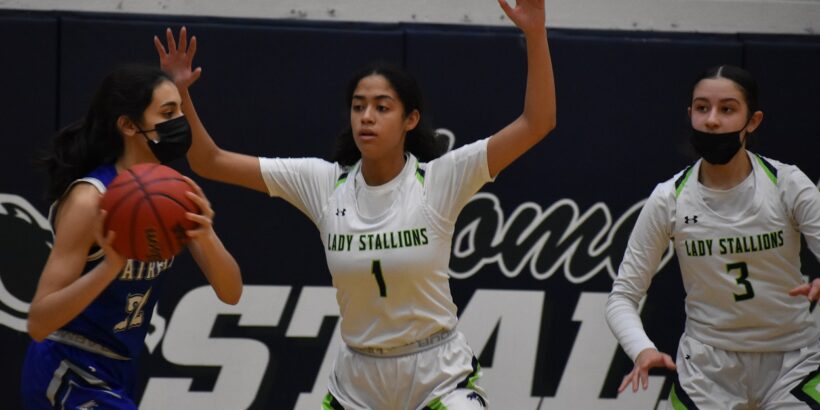 The South County Stallions have been inconsistent for much of this young season, but there’s no doubting their team’s potential to succeed–even in the difficult Patriot District.

On Wednesday night the host Stallions flashed some of that potential against rival Fairfax, grabbing a 42-33 victory. It was the team’s second straight district victory.

They weren’t dominant, but the Stallions (2-2, 3-5) showed they have all the potential ingredients for success. They have size, out-rebounding Fairfax and demonstrating they can score down low. They have shooting–the Stallions’ five first half three-pointers essentially broke the game open. They have depth–eight girls scored on the night, the bench had 29 of the 42 total points, and Stallions coach Nicole Woody played 13 girls.

Finally, South County can play defense. On Wednesday Woody’s team held Fairfax to 28% shooting from the field, putting pressure on the ball and altering their opponents’ shots in the paint.

So what’s the key to a winning season this year for South County?

“We have a lot of talent,” Woody told us after the game. “When we show up as a collective, when we play together, I really believe we’re unmatched. I think tonight we played together most of the game.”

They did, as a number of Stallions made significant contributions on Wednesday. Senior forward Ka’mel Colbert led the way with 12 points, six rebounds, and five assists. When the Fairfax defense closed on her in the posts, Colbert was able to set up her teammates with crisp passes. Junior guards Camryn Frazier and Caitlyn Sheeran provided 13 points between them off the bench, while sophomore guard Kylie Jenae Unpingco added six points. That trio’s long-range shooting was a big factor in stretching Fairfax’s zone defense.

“With them being able to get some shots up and get a little confidence, that helps us knock some more shots down,” Woody said of her guards’ outside shooting. “With COVID and some kids not being able to have a real offseason you’re doing a lot of work in the season, which equates to really needing to get a lot of shots up.”

Woody was pleased with the contributions she got from the collective.

“We’re a team that is fortunate enough to have several players that can score every night. When we take advantage of that, I don’t believe anyone can stop us.”

Young Fairfax (0-4, 0-8) will get another crack at South County in February. They’ve played some very competitive games but with only one senior on the roster, remain winless on the year. Junior guard Elyse Autrey led the Lions with 16 points despite the SoCo defense focused on stopping her, while sophomore Andrea Iriarte Gamboa had 10 rebounds.