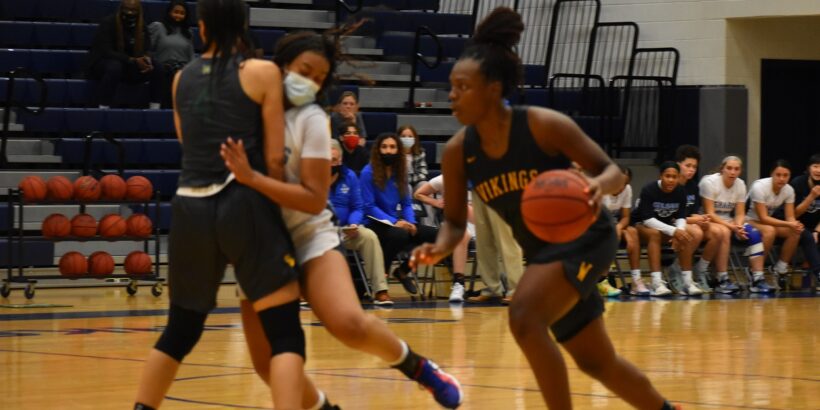 Woodbridge's Amani Melendez (23 points) prepares to use the bone-crushing screen from Taylor Kellum to get to the hoop Tuesday night at Colgan.
Share List

It looked bleak for the Woodbridge Vikings late in Tuesday night’s clash with Colgan. The Sharks were on a 16-0 run to take a 46-43 lead, Woodbridge star Amani Melendez was hobbled with leg cramps, and the Vikings were in complete disarray.

That was thanks in no small part to Melendez and fellow senior Reina Washington. Melendez scored the last of her 23 points on a drive to the hoop to tie the game at 49. She was fouled and missed the and-one free throw, but Washington provided the game-winner on an offensive rebound to give the Vikings a hard-fought, emotional 51-49 win.

Maybe the game of the year at Colgan. A hobbled Amani Melendez’s “and-one drive” to tie it at 49 late. (Shown below). Missed the FT though, Reina Washington gets the follow for a 51-49 @wshsgirlsbb win over Colgan. Story to follow. pic.twitter.com/pwfxnsCl6D

Hard fought game against Colgan! With the score tied 49-49, I made the game winner to win 51-49! We live for these moments! @novahoopsCom @CoachCole3 @PWSportz @wshsgirlsbb pic.twitter.com/PaoEbrQJ6L

They did early in the contest, too, as Woodbridge led from the tip and eventually built a big lead. When Melendez drilled a three-pointer with 4:28 left in the third quarter, the Vikings extended their lead to 38-22.

Colgan took a time out and started to fight back. At the end of the third quarter Colgan’s Kristina McWhinney found fellow junior Alana Jones open for a layup to cut the Woodbridge lead to 43-32. Then, the Sharks defense held Woodbridge scoreless for the first seven minutes of the fourth quarter. Melendez left the game, hobbled by severe calf cramps that left her barely able to walk.

Woodbridge looked aimless without its point guard playmaker and Colgan surged to its first lead, 44-43 on a basket by senior guard Peyton Ray. After an illegal screen on offense by Woodbridge, Ray found Najah Perryman for a basket with about a minute left and a three-point lead.

That’s when Woodbridge’s senior captains struck back. The tide started to again turn when Melendez returned to the game after resorting to unusual methods to ease her cramps.

In fairness, the trainer and some massaging also helped. In any case, Melendez returned to the game to end the Colgan 16-0 run with a basket with 49 seconds left. Colgan responded when Jones found McWhinney for a bucket. Melendez responded again for the Vikings to make it 48-47 Colgan, and after a free throw from McWhinney the stage was set for Woodbridge to snatch victory from probable defeat.

“I felt good enough when I came back in, but definitely nervous,” Melendez said. “Didn’t have enough legs on my shot…was able to get a couple of layups and the and-one. Missed my free throw, but luckily my teammate Reina was there for me.”

Washington was more than happy to oblige her teammate. “Honestly I thought I have to do some magic here,” said a smiling Washington of her last-second follow. “I could have put us in a better situation earlier and made some free throws but I didn’t, so I just felt I had to get that rebound and get it in somehow, and that’s what I did.”

Perryman led Colgan (1-1, 5-5) with 14 points, while McWhinney added 11 and Ray 10. Jones had a fantastic defensive game–the lightning quick point guard was instrumental with key steals down the stretch when the Sharks made their run.

It’s still early season. But for Woodbridge (1-0, 4-4) the victory was a key road win against a resilient opponent that figures to contend for the Cardinal District crown.

Washington and Melendez feel the Vikings can be a special team this year, and they are determined to win the district and do some damage in the postseason.

“I like how we don’t give up on each other,” Melendez said. “We try to always have each other’s backs, on and off the court, and we’re a pretty positive team overall.”

“I’m proud of them,” added Hines. “They fought tonight and that’s all I ever ask.”