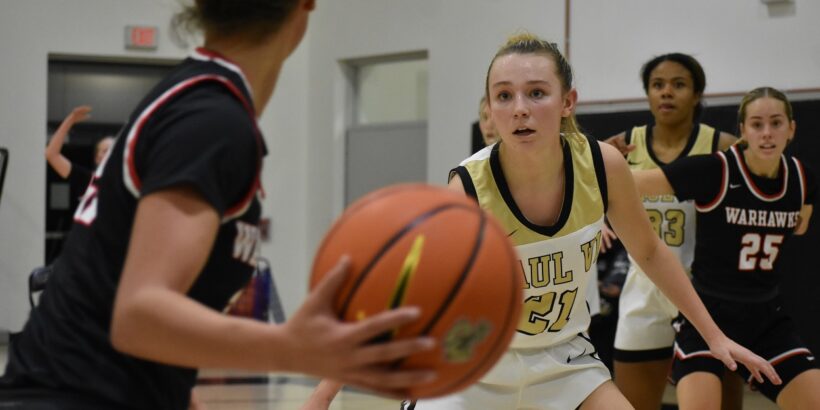 There was excitement in the air as two of Northern Virginia’s best girls basketball programs prepared to face off Saturday night, but that excitement didn’t last long once the game tipped off.

Well, it did for Paul VI at least, as the host Panthers jumped to a 13-0 lead over Madison and never looked back en route to a 53-27 victory.

Beating the state’s best private school program on the road in a shot clock game was always going to be a tall task for public school Madison, but Fairfax County Schools calling off school all last week made it nearly impossible. The Warhawks hadn’t practiced in over a week, and the rust showed, especially early.

That’s not to take anything away from Paul VI, who also lost some time to snow. The Panthers weren’t particularly sharp themselves, but they overwhelmed Madison with their defensive intensity and physicality from the get-go, forcing turnovers with their full court press. The Warhawks settled in eventually, but trailed 34-8 by halftime.

Junior Louis Volker led the way with 17 points and seven rebounds. Crisp passes from her teammates often put Volker in position to score–the Panthers had eight players register assists on the night, led by junior Anna Kunzwiler’s five. PVI was also dominant on the boards, out-rebounding the Warhawks 36-21.

Madison had a hard time running its offense. When the Paul VI press didn’t force steals it delayed the visitors enough where they had a hard time getting a good look at the basket with the shot clock winding down. The Warhawks also couldn’t get much going in the post. Alayna Arnolie led them with eight points.

One reason for that was the big game the Panthers have today. At 2:30 pm they’ll host Sidwell Friends from DC, currently ranked the number one team in the nation.

“Give Madison credit for playing,” Allen said of Saturday’s game, which had been delayed a few times to weather. “They didn’t have to, especially under the circumstances. They hadn’t practiced, and we hadn’t much ourselves. Hopefully now we’re [more] ready for Sidwell.”