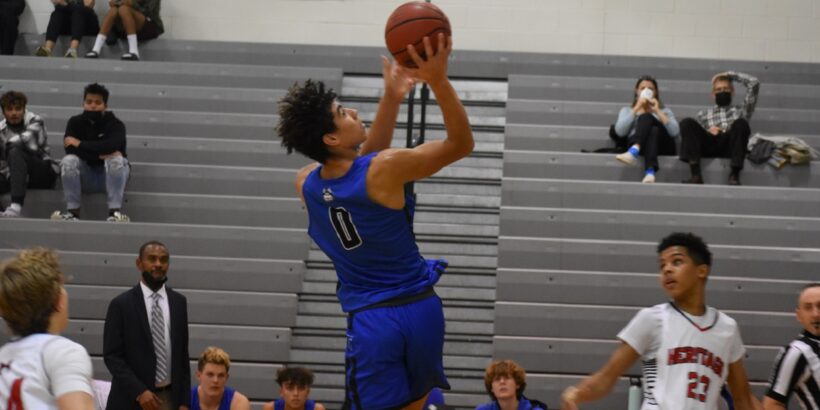 In a razor-close Dulles District game at Heritage Wednesday night between Tuscarora and the Pride, the difference down the stretch was obvious.

The Huskies rallied from five down with 3:37 left to defeat Heritage 51-48, behind some clutch play late by guys like junior forward Gavin O’Malley and guard TJ Duggan. Tuscarora first closed the deficit to 47-45, then with 2:03 left Heritage missed the front end of a one-and-one, one of four missed free throws down the stretch.

Duggan then found O’Malley for a lay-up, which tied the score. Heritage was able to convert one-of-two free throws to retake the lead, but again O’Malley converted down low on a pass from Kurt Lesho to put Tuscarora up, 49-48.

Heritage was called for an illegal screen on offense with 23.7 seconds left. The Pride then fouled Duggan, and the sophomore delivered two big free throws in the clutch to give his team a 51-48 lead. Heritage got a last-second chance to tie, but a three-pointer by Heritage sophomore Colin Smith was off, and Tuscarora had the hard-fought victory.

In the second half Tuscarora was eight-of-nine from the free throw line, while Heritage was five-of-ten. That essentially decided the game.

It was a see-saw, entertaining battle between the young but talented Dulles rivals, with a good crowd to boot. Tuscarora led early, but Heritage responded with a 14-0 run that spanned from the first to second quarter to take an 18-8 lead. At halftime the Pride led 25-20 through their defense, which held Tuscarora to around 30% shooting from the field in the first half.

Then Tuscarora (3-2, 3-5) began the second half on a 10-0 run to take a 30-25 lead. Heritage’s Blake Rorrer ended the run with a three-pointer, got hot, and along with Smith propelled Heritage to its fourth quarter lead.

It wasn’t enough, however. The Huskies’ O’Malley led his team with 17 points, doing lots of damage in the post and hitting all seven free throws he took. Duggan was also flawless from the line and finished with ten points, while senior Sonny Mannino matched Duggan’s ten points and three assists. Lesho also came off the bench to earn some playing time with his inspired play. He added two three-pointers for the Huskies.

Rorrer was sensational for Heritage (1-4, 2-9). The junior point guard had 14 second half points and 20 total. Smith added eight points, all in the second half to help Heritage take its fourth quarter lead. Junior forward Jack Holland had a nice all-around game, finishing with six points, seven boards, and four assists.