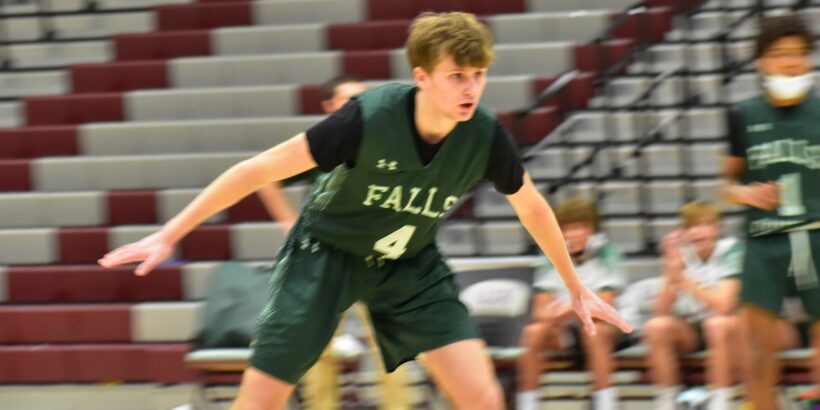 Falls Church senior guard James Dapogny is back with a vengeance after missing some time with a foot injury.
Share List

Dapogny, who has missed a good chunk of the season so far with a foot injury, was impressive. The tall guard got his way to the rim almost at will, and even led his team in rebounding on the evening.

Falls Church Joe Keimig is obviously excited to have him back in the fold.

“He’s a three-year starter for us,” Keimig said. “He brings a lot of energy, a lot of experience, a lot of basketball knowledge. He’s a great player to have on the court and off the court.”

So is Maddox. The pair were ridiculously efficient from the field–by our stats making 17 of 20 shots combined. The rest of the Jaguars, who were missing junior starting guard Damon Kennard, only made 3 of 32 attempts combined.

Still, the win was a good team-earned one, with senior guard Myles Washington dishing out five assists and Jack McGrath doing a good job defensively on Mount Vernon star guard Airon Jones. Keimig told us there’s much more improvement to be had if the Jaguars (2-2, 7-4) are to do serious damage in the National District, however.

“If we want to beat the teams up top [in the National] we gotta do better at defense,” he said. “We pride ourselves on our defense but we can always get better, always work a little harder. And we’ve got to take better care of the ball.”

Despite being forced into taking some tough shots, the senior Jones paced the Majors (0-3, 1-8) with 15 points. Devon McNeil had a solid game as well, contributing 12 points and 12 rebounds.