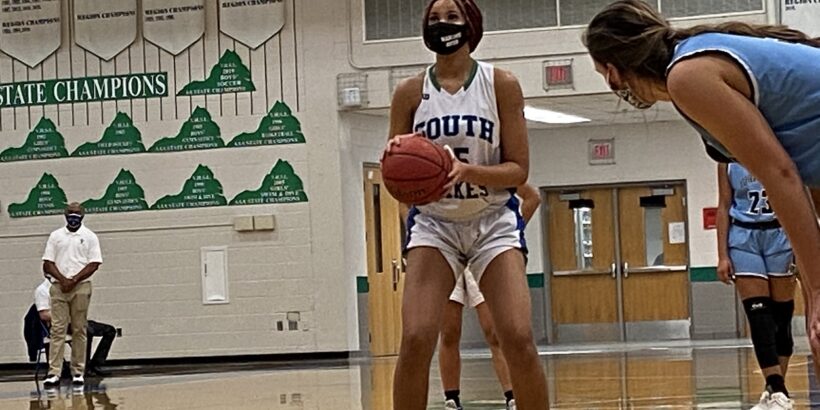 Having already competed twice in district play, Liberty members South Lakes and Yorktown battled once again in the 6D Regional Quarterfinals. Unfortunately for Yorktown, even with a fast start the result turned out the same as the first two contests.

On Tuesday night, senior forward Brianna Scott scored 17 points as the host Seahawks used a 7-0 run at the end of the first half to stage a rally–ultimately defeating the Patriots, 44-29.

Early on, it appeared the third contest was the charm for Yorktown, as the Patriots led after the first quarter and 16-9 midway through the second. Sister guards Asha and Malina Goodwin dished out a couple of pretty dimes early on to posts Ana Bournigal and Grace Maria to establish some early offensive flow.

The run at the end of the half however, helped the Seahawks tie it up and set them up for a successful second half. South Lakes eventually took a seven-point lead into the fourth, establishing permanent control.

“I said it’s going to happen because of our defensive effort, and our offense will come from that. And that’s what started happening,” said Seahawks Head Coach Christy Scott when asked about what changed in the second quarter.

A couple steals and turnovers resulting from the Seahawks’ full-court press were key to the run. Senior guard Nicole Forbes scored nine of her eleven points in the quarter, and was instrumental in changing the energy for the team across the board.

Plus of course there’s Brianna Scott. She stuffed the stat sheet again tonight, recording 16 rebounds to go with her 17 points. As passionate as anyone on the floor, Scott knew that going into postseason play meant kicking it up a notch, and bringing the energy for her team.

“We need it because we started off slow with bad energy,” Brianna said when asked about the slow start. “It could be the last game of our season. We need to push because for some of us, it’s our last games for high school. So everybody picked up their energy because we knew that it was do or die,” she said.

Yorktown (8-8) was led by sophomore Maria with nine points, three rebounds, and a steal. Maria will return for the Patriots next season presumably along with the rest of their squad minus guard Malina Goodwin, who was the lone senior on the team this year. Her sister, sophomore guard Asha Goodwin, will be one of Yorktown’s leaders next season along with Maria and Bournigal, who were both named first team All-Liberty District this season. The Patriots will definitely be contenders in the district next year.

South Lakes (11-4), meanwhile, will advance to play Chantilly on Thursday, who beat McLean tonight. The Seahawks know they will have to bring it going forward in a packed region.

“We’ve gotta come correct from the beginning. We don’t have time to test the waters in a single elimination situation out here. Our whole thing, through our now 10-game win streak, is to out-tough teams,” said Coach Scott.

“The deeper you go in the postseason, the higher you have to take that mentality and face that challenge.”

It should be a fantastic contest, with Chantilly 6D Region Player of the Year Meghan O’Brien matched up against Scott, and tons of talent amongst the Charger guards as well.