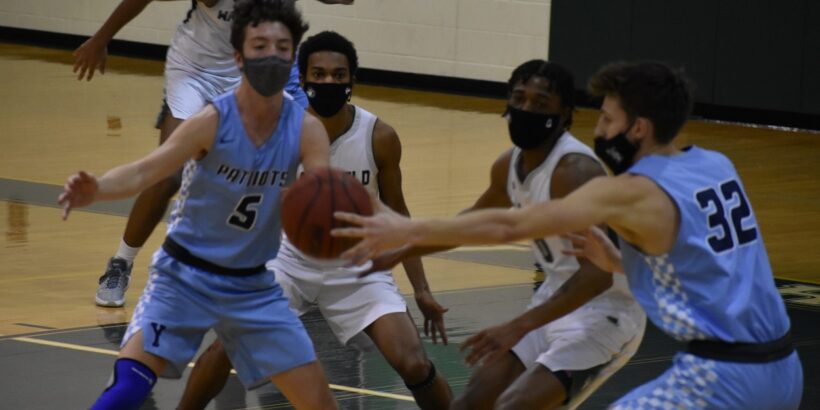 Yorktown's Liam Andersen delivers the pass to fellow senior Jack Burris in the first half of the Patriots' 64-52 victory.
Share List

One night after almost falling at home to upstart Chantilly, Yorktown played a more well-rounded and much better overall game in the quarters of the Region 3D Tournament, defeating rival Wakefield 64-52.

Yorktown coach Joe Reed couldn’t have scripted the evening much better. The Patriots were solid on the glass. They hit eight three-pointers on the night with nine players contributing on offense. The bench contributed 26 points. The defense held Wakefield to 32% field goal shooting. Basically, for Reed’s talented but inconsistent team, most everything clicked.

“I thought John did an awesome job on the boards,” Reed said. “Brandon, who went to school here [at Wakefield] for two years, came out right off the bat, lay-up, lay-up…I think he had something to prove a little bit.”

Maybe Yorktown, which fell in last year’s 6D quarterfinal to another Arlington rival, Washington-Liberty, has something to prove in general. Junior Chris Short added two three-pointers and five assists for the Patriots, who now advance to play Centreville in a Thursday semifinal.

Wakefield (7-3), which won a share of the National District regular season crown, was led by senior guard Lukai Hatcher. The Player of the Year in his district, Hatcher had 17 points and nine rebounds.