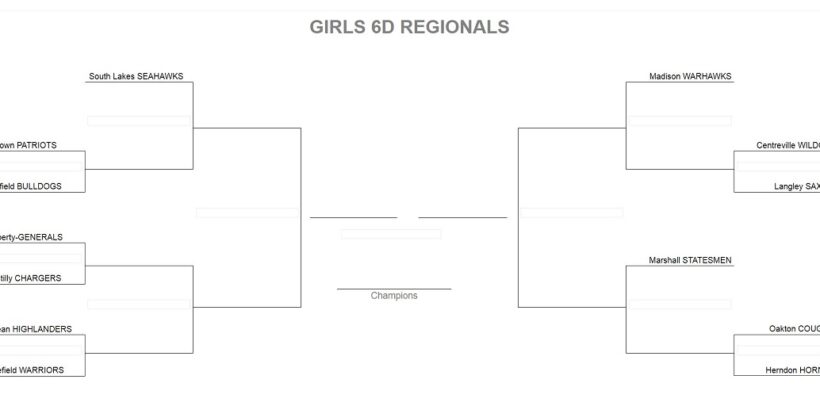 There’s no question the big favorites are Marshall, Madison, and Chantilly here. You could even argue Chantilly losing the coin flip to Madison gives them a better road to the 6D Final since the Chargers avoid a semifinal battle with Marshall. Those three teams have lost two games between them and that was because Madison and Chantilly split.

Pick a favorite. Madison probably has the most experience as it made the State Final last year. The Warhawks also probably have the most balanced rotation. If guards win tourney games no one is in better shape than Marshall with the Trivisonno sisters. Chantilly has ridiculous height and region POY Meghan O’Brien. How far Chantilly goes really depends on how much perimeter scoring the Chargers get in big games to open O’Brien up down low.

Can South Lakes win the region? The Seahawks have clearly improved since early-season, when they lost to Madison, Marshall, and Herndon. We think they can but they’ll have to really play some efficient basketball when teams focus their defenses on Brianna Scott.

There are lots of good first-round matchups and potential sleepers. Traditionally some teams “a year away” hit their stride a season early in the playoffs–if one does here keep an eye on Yorktown. Still very young, the Patriots have all the ingredients to play the top teams tough. They could make a run or they could lose to Westfield, which has proven itself a pretty good team right now with the Reed sisters.

Wakefield-McLean is another interesting battle. The Highlanders have played better of late with a defeat of Herndon and have young, talented guards. Centreville has improved and Langley is another balanced team capable of a postseason run. Trouble is, the Saxons have a very tough potential second round matchup pace-wise with Madison.

Oakton and Herndon are ultimate boom-or-bust candidates with one destined to bust since they match up with each other. Oakton has had a nightmare season with a COVID pause and only one regular season Concorde win. If the Cougars can get the ball inside to Vietmeyer and Kaloi and keep the score reasonable they remain a threat to make a run. Herndon is the opposite–while Oakton can be offensively challenged the Hornets can be defensively challenged. The winner of that game, an interesting conflict of styles, will not be taken lightly by Marshall.

It is difficult to not predict a West Potomac-West Springfield 6C Final here, which would be a rematch of a game the Wolverines won in December. Both teams simply have the most experienced and dominant players: the Spartans with White/Matheny and many others; West Potomac with a balanced, solid rotation that includes Gunston POY Danea Mackey and many others.

There are three teams lurking that could cause trouble. Falls Church has already played West Springfield close in a game this season and the Jaguars have experienced talent in players like Lauren Gagermeier and also younger phenoms. Interestingly the Jags open up with the team they upset in the first round last year, South County. Three of Robinson’s losses are to West Springfield but the Rams are not to be discounted with their tough frontcourt and experience. The winner of a potential Robinson-Falls Church second round matchup would not be a gimme for West Potomac.

And what about Edison? The young Eagles have quietly been getting better and could threaten West Springfield on the right side of the bracket. Yes, West Springfield would still be a solid favorite in that potential game, and Edison’s guards would have to “arrive” a year or so early, but Dianne Lewis’ team has flashed the ability to be dominant in spurts this season.

There are some great first round matchups here with Woodson and underrated, guard-oriented Mount Vernon, plus young teams Hayfield and Fairfax. Lake Braddock is another team that is young but has really significantly improved this season. The Bruins are probably a year away from being a true contender, but they are well-coached and have depth.

Odds say we’ll see a rematch of last year’s Osbourn Park-Colgan 6B Regional Final, but who knows. Most of the players are back this season from that game, though, so logic dictates that another Sharks-Yellow Jackets game is imminent.

Lots of potholes though in the only region (eight teams or more) that has no teams that can be taken lightly. Potomac is not particularly likely to upset Osbourn Park, but the Panthers boast some impressive young talent and the relentless Natayvia Lipscomb. They are not to be written off. A common theme is that guards win tourney games and Patriot has a pair of the best in Elena Bertand and Caitlin Blackman. The Pioneers have already shown they can hang with anyone here.

Riverbend and Massaponax split with one another and have both shown flashes of sustained dominant basketball. Both are tough outs for Forest Park and Patriot on the road. Forest Park is the major boom-or-bust candidate in this region–the Bruins have the talent to win it all, though beating Colgan remains a big psychological hurdle. As long as Forest Park rebounds and plays defense it could be a major threat to Osbourn Park in the semis if both teams make it that far.

No player can dominate in this region, perhaps the state like Alyssa Andrews can. That makes Colgan the favorite here. Osbourn Park is responsible for the Sharks’ lone public school loss and would benefit from a home game against Colgan this year, albeit with not many fans. OP is motivated to make states with its deep and experienced senior class and very well could do so.

Undefeated Woodgrove is the very strong favorite here. Woodgrove has some star power with the Steadman sisters, but the Wolverines are also one of those teams that can hurt you offensively with a ton of players. Well-coached, deep and experienced, it will be a surprise if anyone other than them wins this region.

Still, there are some very nice teams here. Stone Bridge has had a fantastic season, really only eclipsed by Woodgrove. The Bulldogs are very balanced and solid and they have given Woodgrove some decent games. Is the third time the charm versus the Wolverines for Stone Bridge? We’ll see.

We like the National District teams, Lewis and TJ. They’re well-coached but even at home will be hard-pressed to get by Potomac Falls and Briar Woods, respectively. The Panthers have a very imposing frontcourt and Briar Woods has some nice pieces to include standout freshman Hope Drake.

Both Briar Woods and Potomac Falls are dangerous teams, but neither has yet demonstrated the ability to beat Woodgrove or Stone Bridge. There’s a good chance both will get another opportunity here.

Loudoun Valley completed another undefeated regular season, also defeating Tuscarora for a third time this season in the Dulles District Championship. That game raised some eyebrows, though, as an improving Tusky team only lost that game by three points. The Huskies lost their first game to Valley by 31 points and second by 19.

So, could the fourth time be the charm? Louis Volker is already one of the best players in NOVA as a sophomore for the Vikings, so it will be tough. And let’s not get too hasty–Tuscarora still has to get by Fauquier first.

Undefeated George Mason is the headliner here. The Mustangs are very talented and return a lot of the squad that lost in overtime in the state quarters last year. It would be a significant upset if Brentsville could take down personal nemesis Mason, but the Tigers are capable. Sophomore phenom Alden Yergey hit nine threes the other day in a game–that ain’t bad.

Congrats to Independence, which has shown marked improvement in its second year and has good things on the horizon.