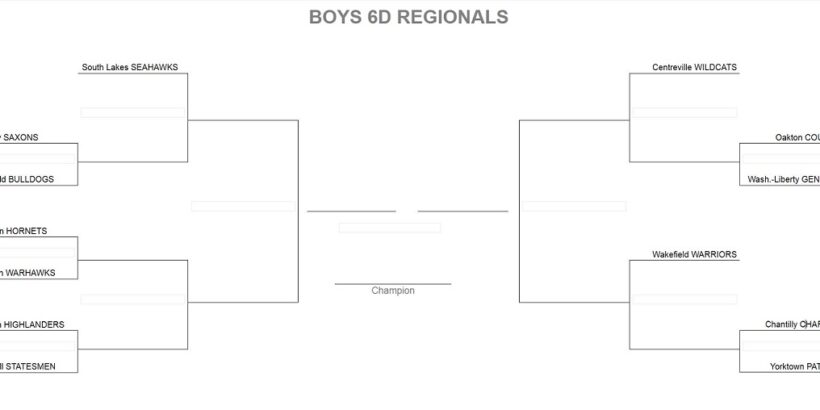 There’s absolutely no question South Lakes and Centreville are the overwhelming favorites here. Both teams swept their respective districts and very few opponents can match the Seahawks’ depth or the Wildcats’ ability to protect the rim.

One would be foolish to not bet on a South Lakes-Centreville title game, but there are many possible roadblocks and a bunch of fun first-round matchups between evenly-matched teams. McLean and Liberty District Player of the Year Nate Legg battle Marshall in what we forecast as a game likely decided by one or two possessions. While both Langley and Westfield would be hard-pressed to upset South Lakes in the second round, both teams are underrated and have played very well lately. The Saxons and Bulldogs should be a great matchup.

Madison is the team (other than South Lakes) to watch on the left side of the bracket, though the McLean/Marshall winner will be a tough local rivalry game for the Warhawks. Madison can play defense, is well-coached, and has four really solid players in Tuft, Spafford, Kuhblank, and Turner. Still, the Warhawks are 0-3 against South Lakes and Centreville this season.

Man, Coach Carmichael at Chantilly has had a tough job, trying to institute a new system there with limited practice time. His Chargers get Yorktown in the first round. It feels like the Patriots never really completely hit their stride this year, but we get the sense that they still have the talent to win the region.

At a minimum a potential second round matchup between Yorktown and guard-oriented Wakefield is an amazing second round rivalry battle. And what about the other Arlington team, Washington-Liberty? The Generals lost a ton of talented guards from last year’s team, but you get the feeling that they have enough experience and height to maybe hang around with Centreville. That is, if they can get past Oakton.

The strong favorite here is South County, reinforced by the fact that the Stallions beat Lake Braddock twice recently. No one is as deep and experienced as SoCo, and it would be a tremendous surprise if Mike Robinson’s team didn’t at least make it to the Occoquan (6C) Regional Final. Still, a caveat: Patriot District rival Woodson beat SoCo once, and West Springfield only lost by two to ’em in one game. They’re both on South County’s side of the bracket, so nothing is given.

W.T. Woodson/Annandale would be fantastic second round rematch of a game the Atoms took 66-61 in December, with Mahmoud Bangura scoring 23 points and 15 boards in that one. On the other side of the bracket, Lake Braddock is probably the favorite despite not receiving a bye. They’re a tough team to deal with because of their talent and up-tempo system, and they’ve eliminated Hayfield the last few years in this region.

That’s unfortunate for Edison, which is a really, really good under-the-radar team. The young Eagles have a pair of posts in Sam Carpenter and Nader Chirchi who are as physically strong as just about anybody. Plus, Michael Montano Best is a tall swingman who can score a ton in a hurry. Even so, if the Eagles get past Lake Braddock Terry Henderson is our Coach of the Year. The Bruins are just simply hard to prepare for with just a few days practice.

Hayfield is deep and talented with Braylon Wheeler and company, but the Hawks are young. In our book that means they can win the region but also fall to the Falls Church-Fairfax winner if they don’t play particularly well–both those teams are well-coached and get can you if they play their pace.

We’d love to see an underdog get hot here in this region, but it’s hard to not picture a Lake Braddock-Hayfield semi-final with the winner getting South County. Hayfield lost to Lake Braddock by a single point earlier this year and Braddock lost to South County in a couple of close ones.

Potomac won this region last year and the Panthers returned virtually their entire team. They’re undefeated and pure and simple, the favorites to win this region.

Still they better not look past anyone, starting with Battlefield. What to make of John Champe? With two surprising recent losses to Osbourn and Osbourn Park, the Knights now have a harder road in the region. They’ll have to beat a tough Riverbend team and likely Potomac to make it to states now. Still, Champe has some top-level guards, and those are what win tournament games.

As Cedar Run regular season champs, Patriot probably has an easier path to states, but it won’t be easy. First up is Hylton, which boasts some very experienced nice senior talent. Then it would be the winner of Woodbridge/Massaponax. Massaponax eliminated the Pioneers last year, and Woodbridge is another Cardinal District team with experienced talent.

Outside of Potomac being a solid favorite in every game they play, really there are a ton of toss-ups in this region. Obviously we’ll be pulling for Woodbridge and Champe to advance to second-round matchups here, presumably versus Patriot and Potomac. A Pioneers matchup with Potomac in the Final would be something–Patriot coach Sherman Rivers began his coaching career at Potomac.

We’re fortunate the Potomac District is usually deep and competitive, because this region is essentially just the Potomac District. It will be a surprise if Lee and TJ can pull first-round upsets, though both teams are well-coached and will play their first round games at home.

Stone Bridge and Rock Ridge are regarded as the favorites here–however, Riverside has the potential to win the region. The Rams have already demonstrated an ability to beat Rock Ridge, and their last game with Stone Bridge was only a three-point loss.

It would be unwise to count out the likes of Potomac Falls here as well. The Panthers don’t have the Anderson/Hawes/Coker-type superstar this season but they have talent and are well-coached. Rock Ridge has top-tier talent with Greg Spurlock, who has faced as many junk defenses as anyone we know in NOVA this year. Superstars win games and the Phoenix have won a fair amount of games this season, but they’ve played a lot of close ones as well–including one just a week ago against their first round opponent, Briar Woods.

This could be the bracket that sees the most upsets. Still, Stone Bridge went 11-1 in the district for a reason. The Bulldogs have a great combination of athleticism, experience, and clutch guard play that will make them tough to beat.

LoCo is so red-hot it’s absurd. The Captains have won 14 straight and there’s no reason to think they’ll fall at home to Culpeper. Loudoun County hits threes, plays defense, and has an extremely underrated player in George Mwesigwa banging inside.

Dominion has a tougher task to make states as its opponent, John Handley just beat Culpeper 101-60. Obviously the Titans, who are tall, experienced, and senior-laden, would prefer keeping their game with Handley a tad more low-scoring. If Dominion can play its own pace, an upset is very possible.

Can Independence make states? We don’t see why not, especially with home court advantage on the right side of the bracket. The Tigers remain young, but the talent is there for a postseason run this year. George Mason will be a tough out, though–guys like Asel and Fletchall are experienced seniors and there’s depth in the Mustangs’ rotation.

Manassas Park gets a tough draw and a long road trip to Goochland. Simmons/Garza is an explosive duo that can return the Cougars home victorious to face Mason/Indy, however. Congrats to Lightridge. The first-year school is at regionals for the first time.