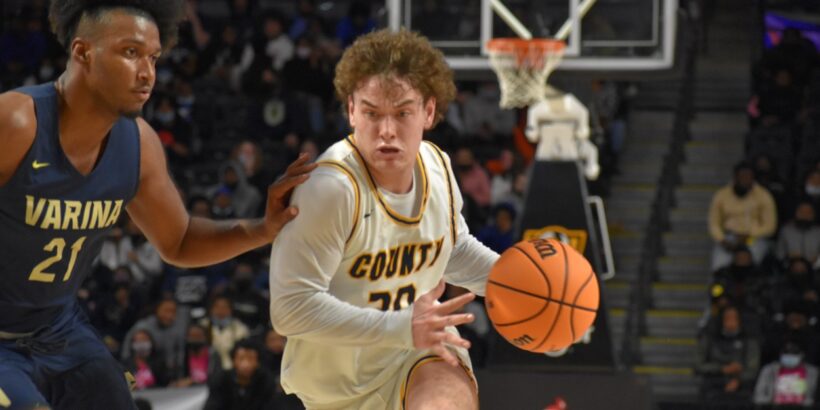 The Captains' Jimmy Daughtrey tries to get past the Blue Devils' Amari Baylor in the second half of Thursday's Class 4 State Final.
Share List

Despite a size disadvantage it seemed early on the Captains had a chance. They led 9-8 midway through the first quarter, and after giving up a 12-0 run, Loudoun County held Varina to just four second quarter points. A Joseph Fitzpatrick three-pointer at the end of the first half kept the game close, with Varina leading 24-19.

While Loudoun County (23-7) could weather the first Varina run, it could not weather the second. The Blue Devils (26-1) scored 19 points in the third quarter while limiting the Captains to two. Their defense held Loudoun County to just seven shots attempted in the entire third, forcing turnover after turnover.

“We held our own for a while [against their size] and then just kind of ran out of steam,” said Captains junior Nicholas Alexander.

Rebounding was an area of concern all year long, and against Varina’s length it was a major problem. The Blue Devils outrebounded the Captains 47-25 on the night (including team rebounds).

“We kind of had a short turnaround to get ready for them,” said Captains coach Mark Alexander. “They’re long and athletic. We did some good things the first half…but they’re a tremendous team. Rebounding was definitely something we were concerned with coming in.”

Alphonzo Billups, a VCU commit, led the way for Varina with 18 points. Amari Baylor, a VMI commit, chipped in with 10 points and nine rebounds.

For Loudoun County, Nicholas Alexander led the way with 12 points.

Despite the loss, it was an overwhelmingly successful season for the Captains, who made a state title game in boys basketball for the first time in school history.

“We have great chemistry,” said senior Jimmy Daughtrey. “I’m happy as a senior I got to go out this way, but I’m not satisfied.”

“I’m extremely proud of our guys…these guys love each other,” said Coach Alexander. “They’ve played together for a long time.”