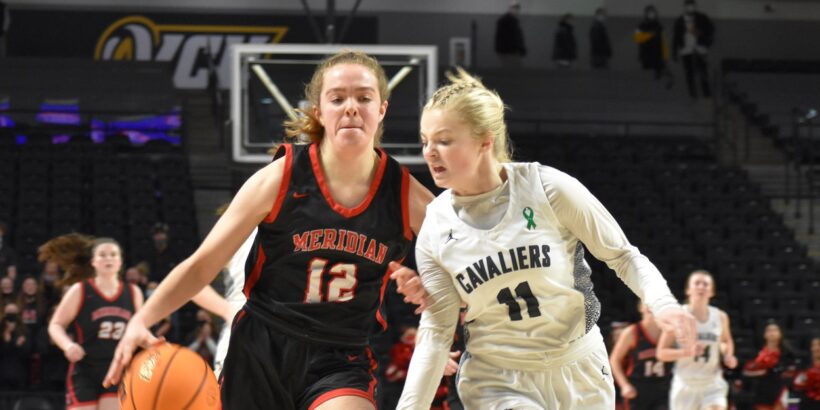 Then, for whatever reason, the wheels of the Mustang bus came off. Down the stretch it was Carroll County, not the defending state champions, that made plays down the stretch.

The result was a 51-47 Cavaliers win at Siegel Center Thursday night–the first girls basketball state title in the history of the southwestern Virginia school.

Was Meridian, which had dominated most of its recent competition, not used to playing close games? Were the Mustangs, who like to play fast, a little run-down late running up-and-down the college-sized floor against the speedy Cavs? Did the crowd, which was mostly pro-Carroll County, make a difference? Or was it just one of those bad stretches all basketball teams go through?

Who knows. Still, at the end of the day Meridian coach Chris Carrico was proud of his squad, which suffered only its second loss in two years of play.

“That was one of the best high school games I’ve ever been a part of in any capacity,” Carrico said. “This is a resilient group…I’m very proud of how we played in a hostile environment.”

“We had our chances.”

Indeed they did. The Mustangs turned the ball over five times down the stretch and went two-of-five from the line to account for their only points after Creed’s three-pointer. Carroll County didn’t hit all its free throws down the stretch, either, but the Cavs grabbed two key offensive rebounds off misses to give them second, even third chances to convert.

Carroll County (23-1), which only has one senior on the roster, took advantage of the Mustangs’ miscues.

Early on Meridian grabbed a seven-point lead, and was up 15-11 after a quarter. Carroll County adjusted soon after, impressing with its ability to force a turnover or rebound and attack via fast break. Sensational sophomore guard Alyssa Ervin led the Cavaliers with 19 points, while Jaelyn Hagee added nine, with four coming on big free throws late.

The Mustangs (24-2), who have 10 seniors on the roster, were led by senior forward Megan Trembley’s 12 points and nine rebounds. Senior point guard Zoraida Icabalceta added 11 points, as did Creed.

It was a disappointing end to a fantastic run for Meridian, but the game was still an experience the Mustangs enjoyed despite the heartache.

“For me it was a fun game,” said Icabalceta, who said she welcomed the challenge the Cavaliers presented to her team.

Motley was very complimentary of the Mustangs even as his team celebrated.