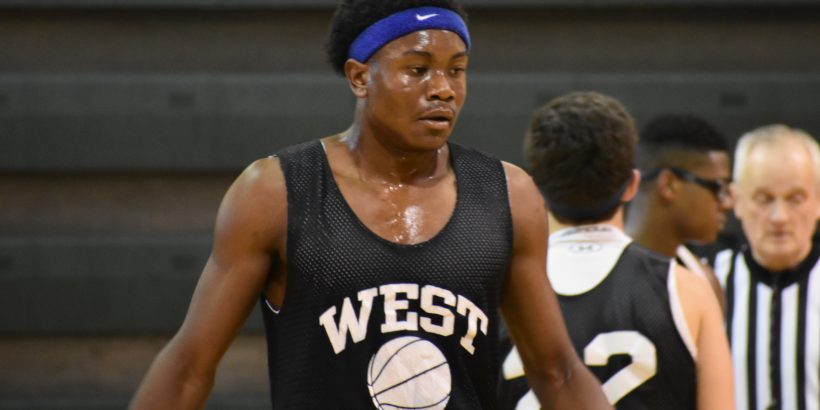 David Houston III is used to winning as Head Basketball Coach for the West Potomac Wolverines. That’s why last year was so odd for him. Houston’s team lost six straight games at one point en route to a 9-15 record.

“Early last year was maybe the toughest point in my career,” the fifteenth-year head coach told Novahoops. “We had lots of first-time varsity players and I don’t think I had ever had more than a four-game losing streak before. It was a humbling, unfortunate part of the process. But we made it through and it probably helped the process.”

That it did. The Wolverines were just fine in the second half of the season, rebounding to claim a share of the regular season Gunston crown and defeating a solid Woodson team in the first round of regionals. And now West Potomac figures to be a threat to go much further in the postseason this year.

Nine juniors and seniors return from last year’s roster, led by senior guard Daryl Mackey, Jr. Mackey is always a threat to lead to the region in scoring. He’s well-known as a good shooter and a player who excels attacking the rim. Now he figures to help the Wolverines a lot more in many different ways.

“Last year was tough for Daryl as he gained experience as a primary ball-handler,” Houston says. “Now he’s better there plus his defense has improved. He’s also stronger, faster, and he’s always been able to jump great.”

He’s a potential regional tournament MVP, but what might set the Wolverines apart this year is their imposing frontcourt. There are few teams around the region that can match the height and intensity there, with seven-foot Jonas Munson and 6’5″ Shannon Harrigan back. Munson, who recently signed with Central Arkansas, figures to put up much more consistent production than he has in years past. Meanwhile Harrigan is one of the region’s better-kept secrets. The senior is active and relentless on the boards, which his coach loves.

“We call it our ‘backpack,’ offensive boards,” Houston says. We preach it constantly–it’s a major weapon of ours.”

Other Gunston coaches are well aware. They are also well aware of West Potomac’s other, lesser-known talent. Houston tells us juniors like forward Colby Dessaure and guard Jack Fricka have improved markedly this offseason and are poised for a big jump. So might be junior point guard Bradley Harden. He played sparingly last year but has improved and could play a key role relieving Mackey of some ball-handling duties. There’s also fellow point guard Ethan Payne on hand, plus Abdi Abdirahim and CJ Gardiner providing depth up front. The depth should allow Houston to pressure opponents on defense.

Depth, height, experience, rebounding, defense, scoring–all the ingredients are there for the Wolverines to make early last season a distant afterthought.

No, we can’t read his thoughts, but if he is thinking that way he may have a point. We’ve been guilty of slightly under-estimating his team the past few years, and while at first glance the loss of eight players to include Brian Cobbs might be too big of a loss to repeat as Gunston Tournament champs, we acknowledge the Hawks are capable of great things this year. They made the state tournament last year and really could do so again.

That’s because Poindexter has quietly cultivated a very deep basketball program with the JV and freshmen teams winning a ton of games recently. His program depth allows him to do what he wants and play fast. Though, even with lots of promising talent ready to step in for the departed seniors, even he’s not sure how deep his team will be this year.

“Our nucleus from last year is mostly gone,” Poindexter told us. “This season is a new challenge. Who will step up? We have a lot of new faces. I’m still going to get up and down the floor and let my athletes be athletes, but I’m not sure how much depth we will actually have, especially early on.”

While the Hawks may not have the depth from last year, their six returnees are all capable of logging significant minutes. There’s guards Rayjoun Pringle and Joah Traylor, small guards who like to play fast. There’s seniors Jacqui Bailey and Jahvon Hutchinson, bigger guards who also like to play fast. There’s 6’5″ junior center Daniel Peterson, who has a chance to blossom into one of the area’s better big men. Oh, and there’s a legit star candidate in 6’3″ senior Michael Joiner. Joiner really came into his own late last season and figures to average around 20 a game this year.

All those guys can play, so actually there appears to be a pretty decent nucleus returning for the Hawks. The newcomers will at least help, although to what degree is unknown. Freshman guard Braylon Wheeler is electric and unafraid to attack the rim. Junior guards Michael Lee and Saria Alshaikhail were great on the JV last year. There’s even a transfer, sophomore guard Dwayne Patton from California, who gives Poindexter insane backcourt depth and will allow him to pressure the ball on defense non-stop.

The only red flags for the Hawks this year are it is going to take time for the newcomers to adjust to varsity competition and there’s not a lot of height on-hand with the exception of Peterson. Rebounding and frontcourt depth is a concern. But Poindexter thinks his bigger guards can compensate on the boards. He cites Hutchinson as a guy who not only has improved as a scorer and a passer, but will also do yeoman’s work on defense and the boards.

Hayfield will hit its stride sometime this year and become a threat. The question is, when?

We can say we were sleeping on the Annandale Atoms up until a few weeks ago. The Atoms enjoyed a resurgence under first-year head Deidrich Gilreath last year, finishing in a tie with Hayfield and West Potomac atop the Gunston in the regular season. We knew they were likely to continue to show improvement this year–we just didn’t really appreciate how deep the Atoms’ roster is until we took a close look at it.

Start with Junior Lotongo. Gilreath thinks the senior guard is ready to become a star and early returns from Fall league suggest that may just happen. A good offensive player already, Gilreath told us he thinks Lotongo “has turned the corner” and is “handling the ball more and starting to make his teammates better.”

The Atoms return six others from last year’s team, a decent amount of whom logged important minutes last year. Guard Alejandro Casquino is back to gun threes while Gilreath thinks forward Mohamed Kanu is ready to come into his own after a solid offseason.

Several newcomers should help as well. Swingman Fuad Koroma is a proven scorer who used to play for Falls Church. Freshman guard Max Lanham has a high basketball IQ for his age and could be ready to log significant minutes right now after adjusting to the speed of the game practicing with the varsity. And senior guard Jalon Lipford joined the squad this year. The tall guard can run the point and gives Gilreath a huge boost of athleticism.

“I think our depth this year allows us to press more, plus we can be more versatile in the halfcourt,” says Gilreath. The only thing he’s worried about is his lack of height, which is more pronounced than perhaps even Hayfield’s. “We’re going to all have to rebound defensively than we are.”

If the Atoms can do that, look out.

Interestingly enough the team that has the most height to throw up against West Potomac is the Mount Vernon Majors. Even after the defection of star TJ Horton to Paul VI, coach Lou Golden has three 6’5″ guys in Kyree Jones, Anthony Daniels, and Nick Pabich to throw into the mix. Golden has unique challenges ahead of him other teams in the Gunston do not, however.

While every other team in the district has a clear go-to scorer the Majors don’t. The senior Jones has the ability to be that guy, however. Jones can stick the three-pointer and also has a quick move to the basket for his size. If he is is able to set an example for the rest of the team and work hard to be a leader and clutch scorer, the Majors will benefit. If he lacks the maturity to step forward in that role, Mount Vernon may have to keep most games in the 40’s and 50’s to be successful.

Either way, Golden has done a great job building a program at the school and there’s considerable depth despite only four players returning from last year’s squad. The three 6’5″ guys will allow him to run multiple posts at teams. Daniels has the potential to develop as a double-double guy on the block and the junior Pabich, although raw, has a very high motor.

“We may be more frontcourt-oriented than we have been in the past,” Golden says. “West Potomac does it, and I think offensive rebounding is a dynamic we have that we haven’t really had before.”

There’s some nice backcourt pieces as well. Senior Elante Cooke is a point guard who can defend with the best of them when he sets his mind to it. Shooting guard Jazer Thomas has looked good after joining the program midway through last year. Golden regards sophomore Abora Kwarteng as his point guard of the future after a good AAU season. Those three plus the Majors’ length should allow Golden to apply some full court pressure on teams after his team scores.

There are some wild cards. Jayon Turner stood out in Fall league as a guy who can score in bunches. He’s strong and powerful with lots of playground experience and if he can find the motor to go with his ability will make an impact. Golden tells Novahoops another guy, Demetri Hill, could be another x-factor. “He’s an athletic guy who can do alot,” Golden says. “He can play the wing or in the post if I decide to go smaller.”

As is often the case Golden has all the ingredients for success this year but has a lot of work to do with ample new pieces and to blend his guys into a cohesive unit. Boom, bust, or somewhere in-between, it’s hard to forecast where the Majors fall this year. Any which way you slice it one would be foolish to under-estimate them–Lake Braddock will attest to that after being bounced in the first round of regionals by the Majors.

Novahoops’ David Kaplan did an interview with new T.C. WIlliams Titans coach Darryl Prue here. He’s got a lot of work to do rebuilding a program that has had four head coaches now in four years, but the program potential is there. Senior combo guard Jaquan Johnson-Terry is back after scoring close to 20 a game last year, as is senior point guard Jaden Thrash. Those two form a very quick and experienced backcourt but only three other players return from last year’s squad, so there isn’t alot of experience. Nor is there a lot of height. Transfer BJ Lee is a nice addition, but it will likely take awhile before the Titans round into form.