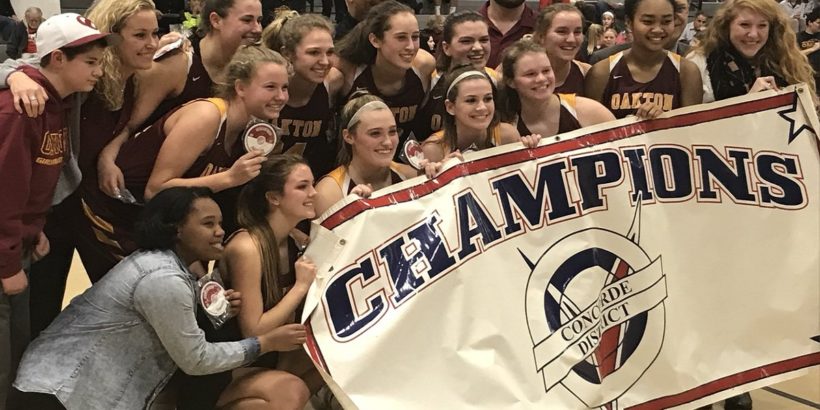 Last year's Cougars squad made a surprise run to capture the Concorde Tournament and well into Regionals.
Share List

That’ll teach you to kick dirt on Fred Priester and the Oakton Cougars.

Okay, we don’t know anyone that actually did that, but after a 1-7 regular season finish in the Concorde last year few expected the Cougars to be a postseason threat. Then Priester’s team won three district tourney games and came within a couple points of beating Marshall and returning to States.

Although the second half of the season is what matters most, Oakton should have smoother sailing right from the get-go this year in the always-formidable Concorde. The Cougars lost four seniors from last year’s team but return seven players. Senior guard Emma Coleman averaged around eight points a game last season and figures to be a good bet for double figures this year. Fellow senior Kate Vietmeyer averaged almost that and is capable of controlling things down low for the Cougars. A player that really came into her own late last year was versatile sophomore Hannah Kaloi. She scored double figures in Oakton’s last three playoff games as a ready-for-primetime freshman.

Tall guards Sarah Goins and Grace Meshanko also return, as does forward Lauren McMarlin and Kate’s younger sister Kara. All look ready for larger roles and are now experienced in Priester’s system. The Cougars are a fairly tall team from one to five with a lot of versatility, shooting, and rebounding ability. Athletic senior Mollie Simon provides frontcourt depth and Priester has three talented freshmen on the roster.

There’s still work to be done and the district will be loaded by the second half of the season, but Oakton has to considered the Concorde favorite. Well, we’re not going to bet against them at least. We never do.

Change abounds across the Concorde in the form of roster turnover and a change in leadership with the Centreville Wildcats. They have a new coach in PJ Clark but she should be able to continue a number of things that have worked well for the program in the past. That’s because Clark played at the school and has coached there the past six years under the departed Tom Watson. So Clark is very familiar with the program’s talent and what has worked in the past.

“I think you’ll see a lot of similarities with us and what you’ve seen before, though we’ll tweak some things,” Clark told us. “I’m super-excited about the year. I’ve coached some of these girls when they were freshmen on the JV and it has been amazing to be there with them as they have grown.”

Clark has an ace backcourt with seniors Whitney Garrett and Ashley Martin. Garrett is an accomplished scorer who will now have to handle more point guard duties with soccer prodigy Aleigh Gambone out of the mix. Opposing teams better account for stopping Garrett first, because she’s capable of scoring a ton even as a point guard. The fleet-of-foot Martin is a player we’ve liked for a long time. A three-year starter, she’ll be counted on to score more and continue to get steals on defense along with Garrett.

More talent returns with Kaya and Jada Squirewell and senior forward Carolyn Hott. Hott will have to step up to try and replace the graduated Callie Doyle down low as will sophomore center Ryann Whacker, who was a standout on the JV last year. Clark is also very high on guard Bridget Kowalski who returns to the program as a senior. Clark coached Kowalski two years ago on the JV, and if she can make an impact this year the Wildcats will have all the more firepower necessary to be successful.

Then of course there’s Centreville’s trademark defense. Assuming Clark can keep that going, and there’s no reason to think she can’t, the Wildcats will always be dangerous.

Expect the Warhawks to eventually be strong in this area, but it may take some time. While the Warhawks are fortunate to have a very strong freshman class with five on the varsity, Stone has found it challenging thus far to instruct them. They’re a talented bunch–just really young.

That may make for a bumpy initial ride, especially since key players Caroline Trotter (knee) and Sarah Conforti (ankle) are recovering from injuries and will not be available initially. Junior wing Trotter is a willing defender and a essential piece for a team looking for a go-to scorer, while the relentless Conforti is a force to be dealt with down low. Those two will be missed as they gear up to full strength.

It’s a mistake to dismiss the Warhawks, however, even early. That’s because there is still a lot of talent present. First of all that freshman class, while inexperienced, is really, really good. If you remember Madison standout and DI player Katie Koshuta her younger sisters Jillian and Katie are now on-hand. That should give you an idea of the potential there. The three other newcomers have bright futures ahead of them as well.

There’s also a good number of returnees outside of Trotter and Conforti. Junior forwards Simone Daley and especially senior Carolina Brusch have experience and will be counted on to keep bigger teams off the offensive boards until Conforti returns. In the backcourt junior Samantha Glowasky returns, as do the Makrigiorgos sisters, junior Tedi and sophomore Amalia. Both played crunch minutes last year and look like they have taken a big jump in the offseason.

There’s only a couple seniors on the roster but the Warhawks look to be a very dangerous second half team once all their pieces return. It wouldn’t be surprising at all to see Madison make a run at regionals once that happens and some of the younger players get acclimated to varsity.

Speaking of “younger players get acclimated to varsity” meet the 2018-2019 Westfield Bulldogs. Noel Klippenstein’s team only has three players back from last years team–the Concorde regular season champs–not among them forward Kirah Johnson. Johnson, a DI volleyball prospect, opted to concentrate on that sport instead of playing hoops.

The future remains bright for the Bulldogs despite that loss. First of all, the three players returning are all significant talents. Junior point guard Hannah Williams was Second-Team All-Concorde and figures to be even better this year. Junior guard Victoria D’Ercole played key minutes in close games last year and sophomore Gabby Reed, who excels running the floor, served as the team’s sixth man last season. That’s a pretty good nucleus for Klippenstein to lean on while her team matures, especially if those three can step up as leaders right away.

But with eight new faces on the varsity, she’ll need others to step forward eventually to support Williams, D’Ercole, and Reed. As rebounding is a concern with Johnson gone, a key piece will have to be senior center Jude Elobaid. Elobaid played on the JV last year. She’s tall and deceptively strong and has to be productive right away for the Bulldogs to hold their own down low.

The veteran coach Klippenstein, who has well over a decade of coaching experience at Marshall and South County as well as Westfield, is optimistic.

“This group has been a pleasure to coach so far,” she says. “They have been given a chance to grow and they’re doing it. They are athletic and once they grasp some key concepts, we’re going to be in good shape.”

Klippenstein talks about her team sort of being in the same boat as the Chantilly Chargers last year. Coach Kurt Sporkmann threw several talented newcomers into the fire and after some growing pains became far more dangerous as the year went on.

The Chargers remain young but there’s no doubting their talent. You definitely don’t doubt their height when the team walks into the gym–people are shocked to learn long forwards Meghan O’Brien and Sophie Pavlech are but sophomores when they prepare for the jump ball. O’Brien was a double-double machine last season as a freshman and plays with remarkable wisdom for her age both on the perimeter and down low. By the time she’s a senior she will have put up amazing career numbers for the Chargers.

Chantilly’s length will be a problem for many opponents. Athletic 5’10” forward Feighery Celie has returned to the mix after concluding her season for the Chargers’ state champion volleyball team. She provides depth. Sophomore Skylar Bibbee and senior Brianna Rogers are also back. Bibbee can shoot and Rogers is capable of helping in a variety of areas–doing the little things the Chargers need to succeed.

The Chargers are destined to be good when their six talented sophomores become juniors and seniors. How far they go this year will likely depend on their backcourt. Senior Jiyun Chae has a beautiful shooting stroke and really simply has to average into double figures if Chantilly is to contend in the Concorde. The sky is the eventual limit for sophomore point guard Megan Baxter, but can she become one of the better guards in the district this season? Many think she can and will, and if that happens, look out.

The Concorde Tournament, like last year, will be fascinating. By the end of the year anyone could win it and duplicate Oakton’s surprise run.