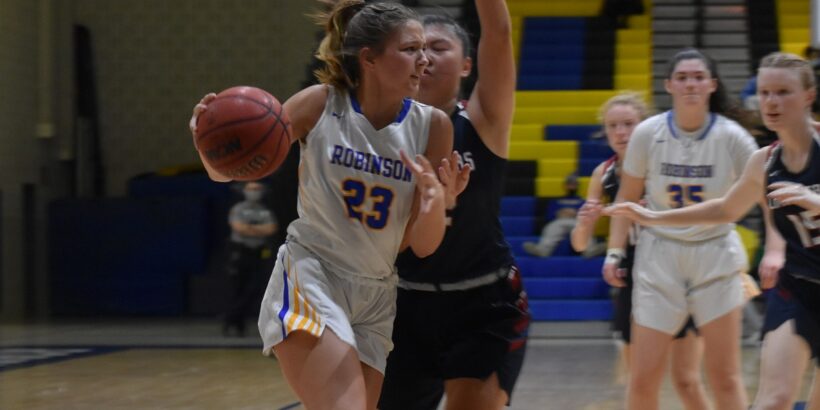 Freshman Rams forward Georgia Simonsen provided her team with a second quarter spark, scoring more for the game than Woodson as a team.
Share List

On a Tuesday night in Fairfax, the Robinson Rams used a balanced attack and dominated the paint to win their Patriot District opener in convincing fashion over W.T. Woodson, 46-13. The host Rams held Woodson to just two points after halftime.

“I really thought it was important for us to start the [district] season off on a positive note,” said Rams Head Coach T.J. Dade. “That’s a good team and they got great perimeter shooters, and inside game. The girls worked really hard in practice this week, and it paid off.”

After graduating a pair of solid forwards last season, one might have been concerned about the post presence for the Rams (1-0, 3-1) going forward. Freshman post Georgia Simonsen has arrived to put all that worry to rest. She led the way with 16 points and a handful of boards, showing off her ability to score in the post, make reads, and clean up the glass.

“Huge upside to her. She’s still learning the game. She’s obviously a big presence inside; she takes it strongly to the basket; she just gives us a dimension that I think, down the road, is going to be a difficult matchup for teams,” said Dade of his freshman.

Her sister, junior guard Amelia Simonsen, notched eight points and shut down Woodson’s shooters along with senior guard Kristine Pham. The backcourt duo combined for four steals, and stopped the Cavs from finding any sort of flow on offense all night.

The Rams only led 8-3 after one, but Georgia Simonsen went to work in the second quarter for eight of her 16 total points, and helped the Rams stretch their lead to 22-11 at the half.

After halftime, the Rams would come out and smother the Cavs on defense, shutting them completely out in the third quarter and effectively sealing the contest.

Woodson freshman guard Emma Komaily led the way for the Cavs with six points and a steal, holding her own and battling all night with Robinson’s feisty guards. Woodson (0-1, 2-2) will have its chance for revenge against the Robinson, as the two will meet again in 2022. The Patriot is one of the more well-balanced districts, and you never know what might happen with so many capable teams.

Robinson will get a test later this week against the impressive 5-1 Alexandria City Titans, and the Cavaliers will look to stay above .500 as they travel to Fairfax this Friday.