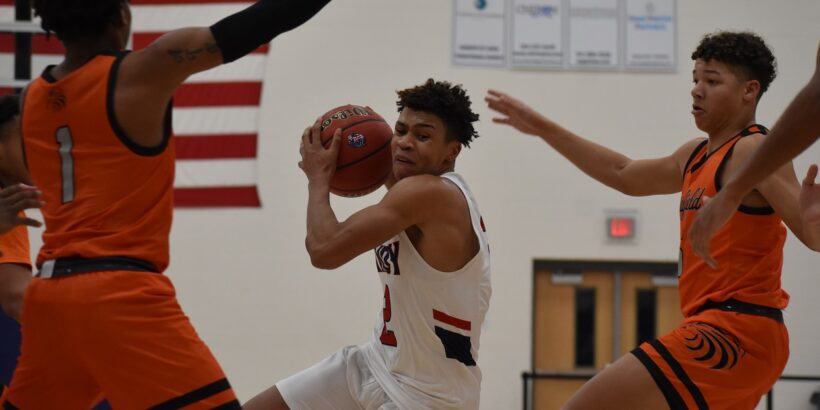 Hayfield Secondary School scored 34 points in transition during its 68-51 road win over Independence High School, which handed the Tigers their first loss of the season.

After the game, Hayfield Boys Basketball Head Coach Carlos Poindexter spoke about emphasizing the importance of playing fast and capitalizing on good defense.

“We practice our transitions every day,” Coach Poindexter said. “Transition is a big part of what we do. We try to be as good as we can transitioning from defense to offense.”

“David is the X-Factor for our basketball team,” Coach Poindexter said. “He’s in the right spots in the right time — all the time, it never fails. I don’t have to coach that part of it, he’s IQ enough to be in those right spots, and he does a great job finishing at the basket.”

The Hawks forced turnovers all game long, and held Independence to just 21 points in the first half.

“When we’re locked in we play great suffocating defense,” Coach Poindexter said. “We’ve got great guards who have active hands and they move their feet well. We did a good job of not letting Independence get downhill and we made them take tough shots. That’s what I love about our team.”

The game began fairly even, but the Hawks gained some separation at the end of the first quarter as 2022 guard Ashton Pratt drilled a fade away jumper as the clock expired, giving his team a 16-12 lead. Hayfield began the second quarter on an 8-0 run, sparked by a three-pointer from Jones.

Independence Head Coach Corey Stitzel called a timeout with 5:36 remaining in the third quarter to regather the team. But the Tigers were unable to slow down the Hawks’ fast-paced offense, as Hayfield would enter the half with a 34-21 lead.

“We don’t win without our fast break points,” King said. “That’s a big part of our game.”

The Tigers opened the second half with a commanding 10-2 run, which brought the crowd to their feet as they chanted “Let’s go defense.” But the momentum was short-lived, because Hayfield responded with a 9-0 run that brought their lead back to 45-31.

King explained that the team’s offensive success was due to the Hawks knocking down their open shots, especially at the three-point line. He also applauded the team’s ball movement.

“We were moving the basketball around,” King said. “We were trying to find the open spots in the zone and cracking the gaps trying to get a layup.”

Independence gave its best effort at a 4th quarter comeback, but the Hawks continued to apply pressure and forced multiple turnovers to help close out the game. Hayfield improves to 3-0 on the season, while Independence falls to 5-1.