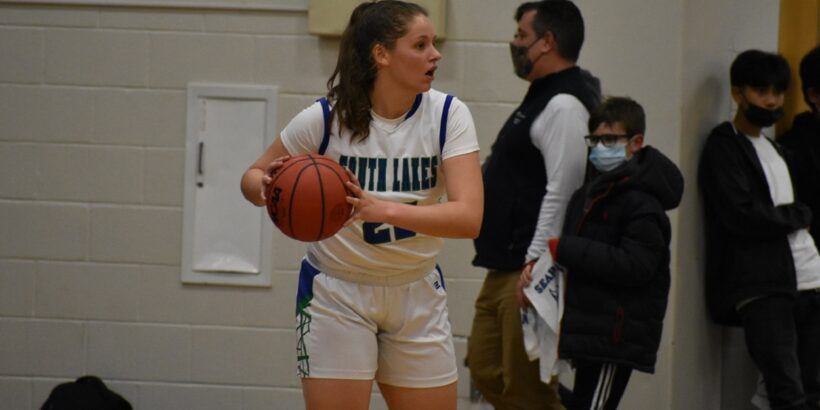 Junior forward Jessica Dornak scored 13 of her 17 points in the fourth quarter to help the Seahawks secure the win.
Share List

With about six minutes left in the contest, having relinquished the lead they had for the whole game, South Lakes Head Coach Christy Winters Scott decided to put her trust in junior forward Jessica Dornak. That paid off as Dornak delivered 13 fourth quarter points and delivered the win against rival Herndon, 53-43.

You never would’ve known the fans weren’t allowed in last year, as the classic cross-town rivalry reignited quickly and the return of student sections made for a high-energy, live environment in the Wendell G. Byrd gymnasium.

“It felt amazing, it’s so fun to have the energy from the crowd, plus the bench. Our girls do such a good job of keeping the energy up and bringing it back up when it drops. It’s just so much fun to play with them and with all of that behind you,” said Dornak.

The Seahawks (2-2) had been leading for the majority of the game, but let the Hornets claw their way back into it towards the end of the third on an and-one by senior guard Tania Bushrod, after steady play on both ends and foul trouble landed several key Seahawks on the bench.

The Hornets outscored South Lakes in the quarter 19-8, and it looked like they had all the momentum for good before the Seahawks settled down again and got back to doing what got them the lead in the first place.

“I told them to stay the course and just keep fighting,” said South Lakes Head Coach Christy Winters-Scott. We needed stops. “We were not keeping them in front of us in that third quarter and the game got away from us. I felt good about where we were and how we got the lead, but we stopped doing the principles.”

The Hornets led by as many as nine, and were up by four after the third quarter. Then, smothering defense from the Seahawk press resulted in Herndon turnovers and got them the lead back midway through the fourth, with guards Renee Timbers and Nava Mehrpour both notching a few steals. Defense then quickly turned to offense, as Dornak went to work in the post.

“I had a lot of fouls earlier in the game and I just knew I needed to do something to help my team, so it just kind of came out of me,” she said.

“It was just incredible heart and guts by our entire team and the bench was great, and just the energy across the board was magnificent. I mean Jess, we were riding what she was giving, and she was giving a lot,” said Coach Scott.

Herndon (2-3) was led by junior guard Aylin Humpherys with 13 points, and Bushrod, who had 10. The Hornets will look to bounce back in district play against Washington-Liberty next week.