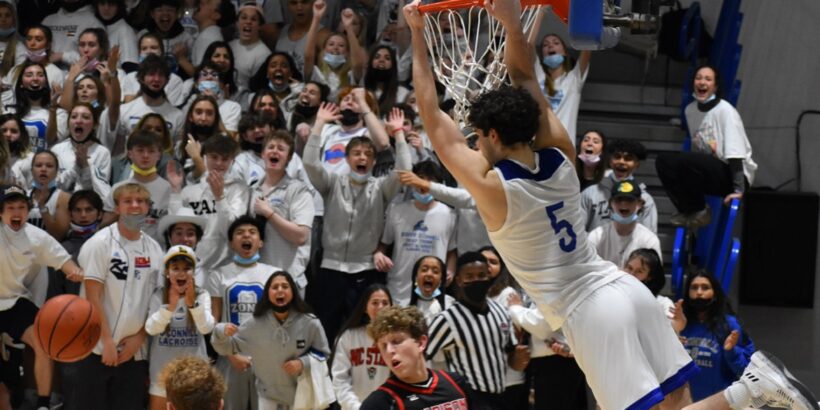 O'Connell's Christian May (19 points) finishes a dunk in front of an appreciative O'Connell crowd on Thursday night.
Share List

The O’Connell boys basketball team is back, and its fans couldn’t be happier.

In front of a raucous home crowd Thursday night in Arlington, the Knights used a potent inside-outside game to defeat Madison, 93-61. It was the first O’Connell home game with fans since the 2019-2020 season, and the mood was definitely festive–especially considering how good a team the Knights appear to have this year.

The Knights exploited their height advantage inside to great effect all evening, out-rebounding the Warhawks 47-23. Whenever the Madison defense sagged down too far to compensate, the O’Connell shooters made ’em pay. Senior Cavan Reilly made five three-pointers to lead the Knights from the arc, and his teammates contributed seven more treys in all.

O’Connell led 20-7 after a quarter, but Madison used some hot three-point shooting of its own to keep it close. Back-to-back three-pointers by Will Giery and Christopher Kuhblank cut the O’Connell lead to 37-27, and Madison only trailed by 11 at half, 41-30.

The crowd got loud, and the rout was on.

All in all, it was an impressive home debut for Coach Joe Wooten’s team and his five seniors, who combined for 64 points.

“We missed last year,” said Wootten after the game. “So obviously the last time Paul Lewis, and Christian May, Cavan Reilly, Job Grant, and David Onanina were on the court, they were sophomores. “So we gotta gain game experience and our schedule is going to be very tough…but I think if we continue to grow we’ll be in good shape.”

Senior guard Andrew Gorkowski led the Warhawks with 12 points and six assists, while junior guard Joseph Chalabi was a perfect three-of-three from the arc off the bench. It was Madison’s first loss on the year after four victories.

“I thought it was a hard-fought game,” Wootten said. “I thought Madison played really well–they battled, they’re really well-coached and they played hard.”