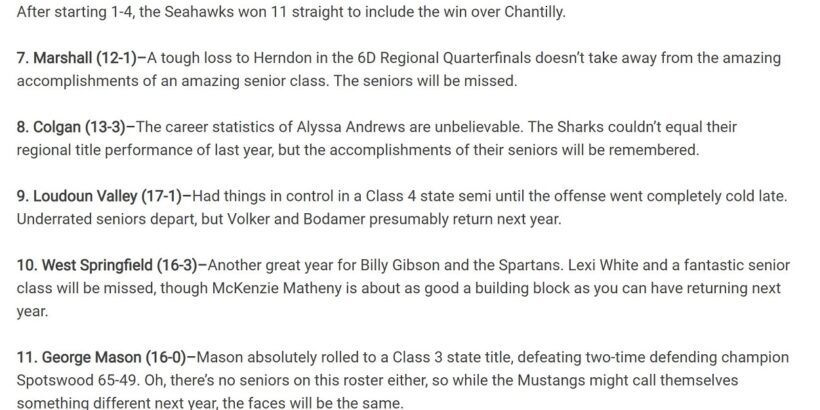 2. Madison (16-1)–State champions after two 54-48 wins over West Potomac and Osbourn Park. It will be a massive surprise if the Warhawks don’t win a third straight Class 6 state title next year, as just about everybody returns. We for one hail our new Warhawk overlords.

3. Osbourn Park (14-2)–Came up just short in the state title clash versus Madison. The senior class of Raflo, Scarborough, Harju, etc. really still managed to close it out in style in this abnormal season. Congrats on amazing HS careers.

4. West Potomac (12-2)–Also fell versus Madison, but if you didn’t watch the game you don’t understand how much the Wolverines made the Warhawks sweat late. Got within a point and many shots just didn’t fall to take the lead–one does and we could be talking about a Wolverine state title.

5. Chantilly (14-2)–An upset loss to South Lakes does not diminish the achievements of a Charger senior class that will be remembered as one of the most talented in school history. More talent returns next year than you might realize, however.

6. South Lakes (12-5)–What a turnaround for the Seahawks, who improved perhaps like no other during the year. After starting 1-4, the Seahawks won 11 straight to include the win over Chantilly.

7. Marshall (12-1)–A tough loss to Herndon in the 6D Regional Quarterfinals doesn’t take away from the amazing accomplishments of an amazing senior class. The seniors will be missed.

8. Colgan (13-3)–The career statistics of Alyssa Andrews are unbelievable. The Sharks couldn’t equal their regional title performance of last year, but the accomplishments of their seniors will be remembered.

9. Loudoun Valley (17-1)–Had things in control in a Class 4 state semi until the offense went completely cold late. Underrated seniors depart, but Volker and Bodamer presumably return next year.

10. West Springfield (16-3)–Another great year for Billy Gibson and the Spartans. Lexi White and a fantastic senior class will be missed, though McKenzie Matheny is about as good a building block as you can have returning next year.

11. George Mason (16-0)–Mason absolutely rolled to a Class 3 state title, defeating two-time defending champion Spotswood 65-49. Oh, there’s no seniors on this roster either, so while the Mustangs might call themselves something different next year, the faces will be the same.

12. Forest Park (10-3)–It’s insane to think Angel Jones isn’t even a senior yet. The Bruins lose some nice players but we expect them to be district and regional contenders next year, perhaps more.

13. Patriot (10-5)–Another team that should contend next year even with losing Caitlin Blackman. Elena Bertrand dropped 31 points in a regional loss to Colgan–she’s back next year and eight others.

14. Herndon (8-8)–A roller coaster season for the Hornets ended with a loss to Madison. It was an impressive regional run to get to that point, with Herndon defeating Oakton and previously undefeated Marshall.

15. Woodgrove (13-1)–A shocking loss to Potomac Falls ended a season where it seemed the Wolverines were destined to again make states. As disappointing as the loss was, Woodgrove only loses four seniors.

16. Virginia Academy (11-3)–VISAA Division III champions…though we’re not sure why the VAA boys competed in Division II while the girls three. Oh well–all we know is this team should continue to get better with its leading scorers presumably back.

17. Potomac Falls (10-6)–Potomac Falls wasn’t at full strength for some of the year. What mattered is that the Panthers were when it counted most. Class 5 State Tournament berth is an amazing achievement.

18. Stone Bridge (12-3)–A very good season comes to an end for the Bulldogs, who fell to Potomac Falls in the Region 5C Title Game. While losing O’Day, Hafer, Cowden, Lawrence is tough, Stone Bridge returns nine next year.

19. Edison (11-4)–The Eagles will unbelievably be fairly young next year as well, as they have one senior and four juniors on their current roster. Progress is inevitable.