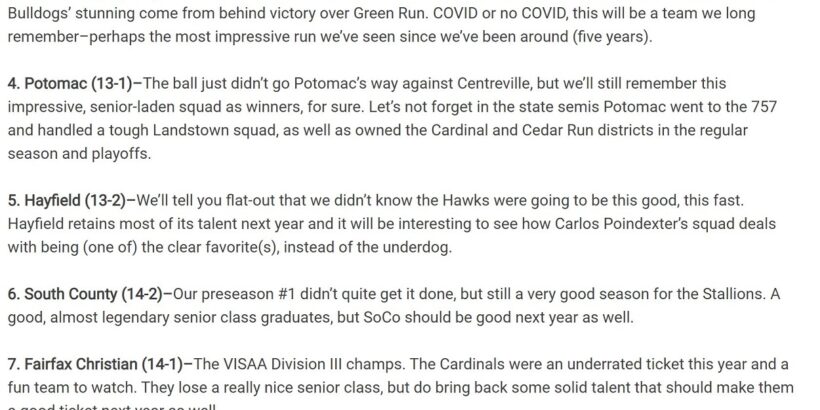 1. Paul VI (7-4)–Just a shame we couldn’t see this team play more, but the last game versus DeMatha was a treat. Six seniors leave, but McDaniel and a lot of younger talent (DeShawn Harris-Smith, etc.) return.

2. Centreville (14-2)–Sure, the Wildcats got to play at home, but it was impressive the way Centreville took care of Hayfield and Potomac. Wildcats have benefitted from returning private school talent (Kuzemka, Ford, Douglas)–will there be more next year? If not, there’s still some nice pieces returning from this year’s Class 6 state champion.

3. Stone Bridge (16-1)–Since we’ve been a website, no NOVA team has won a Class 5 title. That changed with the Bulldogs’ stunning come from behind victory over Green Run. COVID or no COVID, this will be a team we long remember–perhaps the most impressive run we’ve seen since we’ve been around (five years).

4. Potomac (13-1)–The ball just didn’t go Potomac’s way against Centreville, but we’ll still remember this impressive, senior-laden squad as winners, for sure. Let’s not forget in the state semis Potomac went to the 757 and handled a tough Landstown squad, as well as owned the Cardinal and Cedar Run districts in the regular season and playoffs.

5. Hayfield (13-2)–We’ll tell you flat-out that we didn’t know the Hawks were going to be this good, this fast. Hayfield retains most of its talent next year and it will be interesting to see how Carlos Poindexter’s squad deals with being (one of) the clear favorite(s), instead of the underdog.

6. South County (14-2)–Our preseason #1 didn’t quite get it done, but still a very good season for the Stallions. A good, almost legendary senior class graduates, but SoCo should be good next year as well.

7. Fairfax Christian (14-1)–The VISAA Division III champs. The Cardinals were an underrated ticket this year and a fun team to watch. They lose a really nice senior class, but do bring back some solid talent that should make them a good ticket next year as well.

8. South Lakes (14-1)–Season came to an end with the upset loss to Madison in the 6D Semis. That doesn’t take away from a fantastic regular season in which the Seahawks went undefeated and won their games by an average of more than 20 points.

9. Lake Braddock (11-3)–Had a bad second half against Hayfield in the 6C Semis where the game got away from Brian Metress’ squad. Retain a ton of firepower next year–will be again one of NOVA’s best in ’21-’22.

10. Virginia Academy (11-3)–Had a hard time getting going in this uneven season, but eventually scored some pretty good wins against notable competition. Lost to Steward in the VISAA Division II Tournament by a bucket.

11. Patriot (12-3)–Got down big early against Potomac in the 6B Final and couldn’t recover. 11 players are slated to return off this season’s roster, though Nelson/Watson is a tough duo to lose.

12. John Champe (12-4)–Recovered from an awful last regular season week where the Knights lost twice to account well for themselves against Potomac in the 6B Semis. It will be tough to imagine the Knights without the Jaspers.

13. Loudoun County (15-3)–What a year for the Captains. Fell short at John Handley in the 4C Regional Final, but that was after 15 straight victories. A good deal of talent coming back next year, too.

14. Madison (11-5)–Couldn’t get over the Centreville hump but what a job by the Warhawks upsetting South Lakes on the road in the 6D Semis. Warhawks lose another memorable senior class but this is about as solid a program around.

15. W.T. Woodson (11-6)–Impressive year for the Cavaliers, especially considering they lost six seniors from last year and inside force Joe Pesansky to transfer. Klein and Pacheco is a great foundation for next year.

16. Dominion (10-5)–Impressive senior class went out in the 4C Regional Semis versus Handley. This was a good team that played smart and knew how to control pace.

17. Independence (12-5)–A very good year for Independence in just its second year of existence. Indy won the 3B Regional Tournament and should retain its big guns for a run next year–at a higher classification.

18. Battlefield (8-4)–Here was an underrated senior class–Svenson, Olds, Bonsu, Laster, Singh–that gave Potomac all it could handle in the first round of regionals.

19. Yorktown (10-6)–Came around at the end of the year to score two wins at 6D Regionals before falling to Centreville. An impressive senior class goes, so it will be interesting to see how much the young guys progress next year.