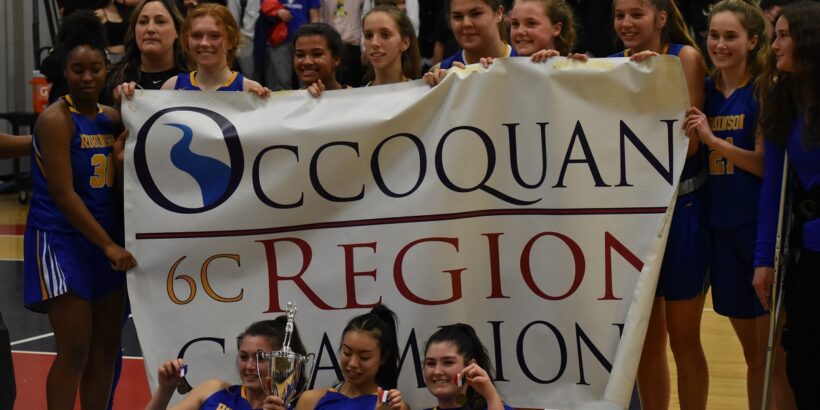 All season the Robinson Rams’ defense has been excellent, holding opponents to an average of just over 30 points a game. Saturday night in the 6C Occoquan Region Final at Edison, the Rams defense was even better than excellent.

T.J. Dade’s squad held Edison to 20% shooting from the field and 10% from three-point range, as the Rams won their first regional title in a generation with a 42-28 victory.

Not since 2000 and the days of ex-Rams coach Dwight Trimmer had Robinson cut down the nets at a regional tourney. Many of the talented Robinson teams early this century were defensive-oriented as well. Many of them could hurt you in the post, which this 2021-2022 team also excels at.

Freshman Georgia Simonsen scored 21 points and grabbed 12 rebounds to lead the Ram onslaught down low against Edison. Junior Caroline Shimp added 11 points, as both players were able to establish position on the blocks and attack from the high post.

Junior Toni McCrae led the Eagles (24-4) with 11 points. Edison, which had torn through the Patriot District (South County, West Potomac, Lake Braddock) en route to the 6C Final, had a bad night against the Patriot champs, but nevertheless already qualified for the Class 6 state tournament. Dianne Lewis’ young but talented squad will travel to Region 6D champion Madison next week.

Robinson (26-2) will enjoy the win this weekend and then also get back to work. The Rams will host 6D runner-up Langley at states late next week.