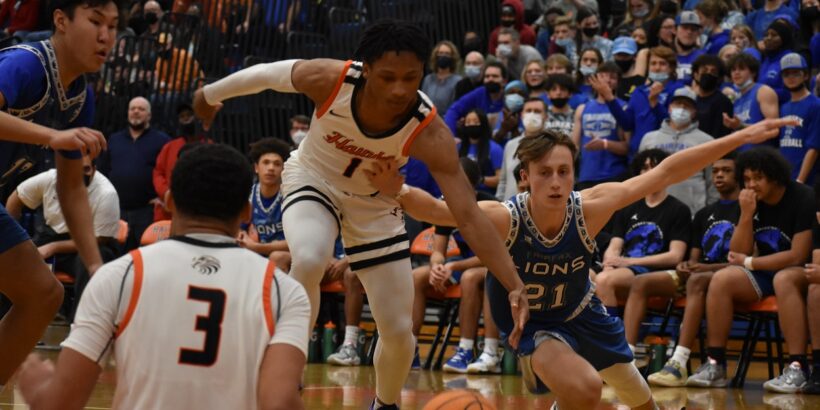 The Lions led early in the first quarter, and even when the Hawks juggernaut started to warm up, they trailed only 16-15 after a quarter. The Hawks upped their lead to double digits in the second, but Fairfax rallied to make it a manageable 32-24 at half.

Unfortunately for Fairfax, Hayfield hadn’t even gotten started yet.

The Hawks outscored their opponents 28-3 in the third quarter to the delight of their raucous home crowd, stunning the Lions with a dominant outburst that delivered an Occoquan Regional Title to Hayfield, 82-45.

In the outburst there was suffocating Hayfield defense, crisp ball movement, shooting, second-chance looks at the basket–everything Carlos Poindexter could reasonably expect from his team, which moved to 29-0 on the season.

Have your pick of a Hawks hero on the evening. Junior forward David King was his usual dominant self at the rim, scoring 21 points on nine-of-nine shooting from the field. Junior guard DJ Holloway, named the regional tournament MVP, had nine points and was tough on the glass with seven boards. Junior point forward Greg Jones got his long arms in the passing lanes on defense all night, and also contributed nine points and five assists. Seniors Braylon Wheeler and Ashton Pratt buried six three-pointers between them.

Those five Hawks starters shot 53% from the field as a unit and forced turnover after turnover on defense in the second and third quarters.

Fairfax (20-6) got nine first half points each from seniors Xavier McCrary and Kaden Horner (three treys), but neither scored after halftime. Star junior guard-forward Margad Choijilsuren led the Lions with 18 points, six rebounds, and three assists. The Lions will play in the eight-team Class 6 State Tournament next week, opening at Region 6D Champion South Lakes.

The Hawks will also be in that tourney, and anything less than a state title would be a big disappointment for them. They’ll open up their quest for one at home against Washington-Liberty.