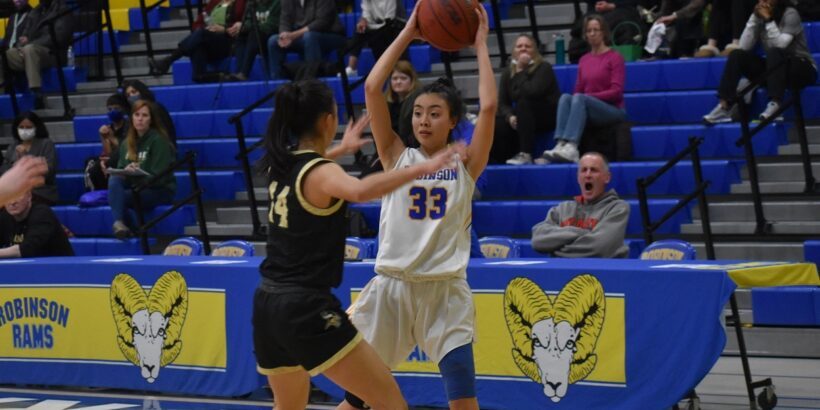 Robinson senior Kristine Pham, who provides the Rams leadership, ball-handling, and defense, looks to get the ball into the post Friday night versus Langley. (Photo by Delta Dakota)
Share List

Everyone knows that early state tournament games are historically held at Robinson in Northern Virginia. Last night was the first time in a long time that the Rams played a state tourney game on their home floor.

Welcoming the Langley Saxons in the quarterfinals of Class 6 play, the hosts overcame a late rally, made free throws and defensive stops to punch their ticket to the semifinal next week, 36-32.

All season long and especially this postseason, the Rams (27-2) have consistently played stellar defense. But Langley jumped out to a hot start, hitting three three-pointers in the opening quarter, a good sign for a team that sometimes has trouble on offense. It was all knotted up at ten after one.

In the second quarter, both teams came out feisty and aggressive on defense, resulting in several jump balls and steals. Rams star freshman Georgia Simonsen hosted her own little block party, registering four in the period and two in back-to-back inbounds plays.

That helped the Rams get a small lead, only to see Langley respond to go up by two going into the intermission.

The hosts really began to find their groove in the third, as they completely shut out the Saxons on offense and got easy baskets in the paint. Junior first-team Occoquan region post Caroline Shimp (17 points, four rebounds), led the way in the quarter with five points. On the other end, Georgia Simonsen grabbed five rebounds as the Rams led by seven after three.

Langley (19-6) did not throw in the towel, though. As the Saxons turned up their own pressure on defense in the fourth quarter, transition buckets and trips to the free throw line resulted in the Robinson lead slowly being erased. Junior G/F Raylin Harrell notched six points in the fourth to help spark the Langley comeback.

Then, Liberty District Player of the Year AB Holsinger hit a turnaround fadeaway to tie the game at 32. That’s when Rams Head Coach TJ Dade knew his team had to step up and hit their foul shots.

“I knew they were going to come at us, start pressuring and doubling us, and at some point they would have us on the line,” Dade said. “We made some costly turnovers. They’re a good team, they came down and capitalized on it.”

Shimp was fouled after Holsinger’s bucket, putting her in the one-and-one situation. And she calmly stepped up to knock down both.

“We do it all the time in practice. It’s ingrained in my brain, I knew I had to make it—it was a high pressure situation, and I just focused straight on the basket and shot my shot,” said Shimp about the clutch moment.

Shimp has been a leader all season long, but expressed enjoyment in watching and mentoring the young Simonsen.

“I remember when I was a freshman I had a really good connection with one of the posts, and I really wanted to be that for Georgia. And just seeing her grow, learning, and getting better, learning to do different things like a left hand, it’s just super fun to be around her.”

For Langley, the game concluded the end of one of their most successful seasons record-wise in a couple years. It was only four years ago that they made it to the state final. The Saxons graduate a fantastic, all-region backcourt of Holsinger (eight points, two assists, one steal) and Caitlyn Shumadine (six points, three rebounds, two assists).

Losing a strong senior class is always tough, but grants the opportunity for underclassmen to step up. One in particular who has already impressed on the floor as a freshman for Langley is G/F Anya Rahman (five points), a second team all-district and all-rookie team honoree.

On Monday, the Rams will face the heavily favored Madison Warhawks, and Coach Dade says they are fully aware of what meeting that team involves.

“I know we’re going to be an underdog going in, but this team—they’ve built confidence and they expect to win when they walk into a gym. We just need to prepare, I think we’ll be up to the task, and they’re excited about it.”