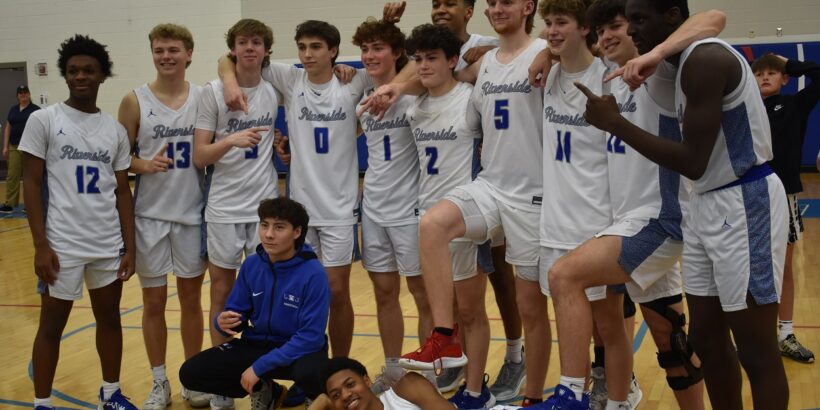 The Rams home crowd packed out the gym and were relentless all game long. Every Riverside highlight was followed by cheers that were so loud you couldn’t hear your own thoughts. After the game senior forward Jamie Ntiamoah spoke about his gratitude for the team’s support and the chance to play for the Rams.

“I’m grateful to be in this opportunity,” Ntiamoah said. “Four years ago I was one of the kids standing in the stands looking at this saying ‘dang, I hope this is me one day.’ I loved the energy & atmosphere, it was beautiful.”

Riverside leads 24-15 at half. Rams defense has been creating turnovers all game long.

This Riverside crowd is also the best I’ve seen/heard all season — every Rams play made causes an eruption. Here’s a clip of their pregame light show 🔦@novahoopsCom 🏀 pic.twitter.com/2XRvuASncL

Ntiamoah led the Rams as he nearly posted a triple double with 16 points, 12 rebounds, 7 steals, and 5 assists. Riverside head coach Michael Koscinski also spoke about his appreciation for the Riverside community and enjoying the culture that had been created over the years.

“I got some advice three years ago to enjoy what we built,” Coach Koscinski said. “There’s been some hard times. When I got here we got it going in year four, and the wisdom I got was to enjoy the run and look up at the stands. Honestly, we’re just trying to have fun and enjoy (ourselves.)”

Junior guard Cameron Koscinski also had a big night for the Rams as he contributed 14 points and 4 rebounds. Senior guard Brendan Coughlan led the Jaguars with 19 points and 2 steals.

The Jaguars got on the scoreboard first as senior guard Clifton Fuller found senior forward Kelvin Choice, who laid the ball in under the basket. But the rest of the first quarter would belong to the Rams as they’d go on a 13-2 run to lead 13-4 heading into the second quarter. The first quarter surge was created off of turnovers and second chance points.

“Our main game plan going into the game was limiting their dribble-drive because they have a lot of athleticism and bigs,” Ntiamoah said. “One of the things that we harped on all season is rebounding – I think that was one of our best (performances.) It was a heck of an effort on both sides from our team.”

Riverside (18-11) carried its momentum into the second quarter as the Rams continued to frequently force steals, including a steal that led to Ntiamoah breaking away and slamming a dunk that sent the crowd to their feet.

“Without my teammates I wouldn’t be getting anything,” Ntiamoah said. “They set me up with threes, and they opened the lanes for me to do my thing.”

The Jaguars took a timeout with 5:55 remaining in the quarter as they trailed 17-5. But even after the timeout, Riverside forced six steals to help maintain a 24-15 lead heading into the half.

“We got up in the lanes and I think we just bothered their handles,” Coach Koscinski said. “Our length is really good in the 1-3-1 so we (stuck) to it. I was surprised how much we turned them over, because they don’t normally – Glen Allen is a well-coached team. We knew we could mix in some pressure here and there and we changed our sets more than (usual). I think that messed them up defensively. It threw them off because they didn’t know what was coming.”

The Rams dominance continued in the third quarter when Koscinski had a big block on the defensive end, and then went coast-to-coast and drilled a pullup jumper that was followed by high praise from the crowd. The basket would begin a 12-2 run; that increased their lead to 38-19 with four minutes remaining in the quarter.

Glen Allen realized time was running out, so the Jaguars adjusted their offense to create looks for their shooters as much as possible. Coughlan would hit a three-pointer, and also convert three free throws when he was fouled on a three-point attempt late in the quarter. Still, the Rams led 45-29 heading into the fourth.

The Jaguars were able to produce a 7-0 run early in the quarter, but Riverside held them off to eventually secure the 65-41 victory. After the game Coach Koscinski spoke about how playing in a Potomac District loaded with good teams, and how that helped prepare the Rams current playoff run.

“I think getting out of the district was the key,” Coach Kosinski said as he laughed. “Our district was tough. It was a heck of a district all the way, one through six – it really prepped us. There was no better defensive team that we’ve faced this season, than Potomac Falls and we played them three times. Stonebridge would be right there with some of the (looks) we’re seeing now and their team speed. We had to defend Independence, and they were a dynamo offensively. Those were great games for us to get ready. I mean we had double digit L’s on the season, but we always knew that we had our best in us. We’ve got some really resilient guys.”

Riverside (18-11) will travel to Highland Springs on Monday to matchup up with Springers in the Class 5 state semifinals at 7pm. Coach Koscinski said that the Rams need to continue to execute defensively and rebound well to advance in the state tournament.

“I think it comes down to rebounding and defense,” Coach Kosinski said. When I look at Highland Springs they’re quick, they’re athletic, and they’re highly talented. Now that we’re seeing different teams, we’re seeing that a lot of the (schemes) we do – people don’t see that. We’re trying to key in on two or three things each game where we think we can exploit, and they’ve been really great at getting that down.”