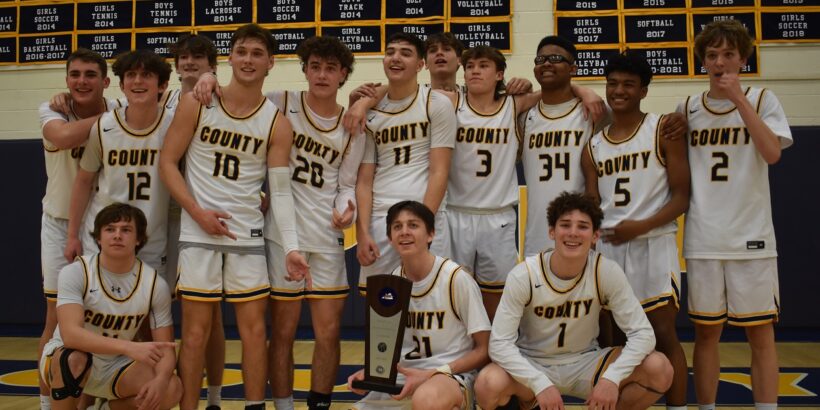 Loudoun County trailed Loudoun Valley 46-33 heading into the fourth quarter of the 4C Regional Championship game. The Vikings had comfortably led since the first quarter, and the visiting Loudoun Valley crowd was going ballistic as their team was eight minutes away from the 4C region crown.

However, eight minutes was more than enough time for the Captains to produce a comeback as they outscored Loudoun Valley 19-6 in the fourth quarter, which would eventually tie the game at 52 and force overtime.

“I was trying not to be worried, but I was worried,” Loudoun County head coach Mark Alexander said as he laughed. “It’s always a battle against Valley. It’s unbelievable. I’m proud of my guys for not giving up.”

The Captains’ momentum was halted when sophomore guard Landen Conrad drilled a pullup three-pointer just a few seconds into overtime. After an unsuccessful offensive possession, Loudoun County took a timeout to regroup.

Loudoun County would eventually get a basket from senior guard Brendan Boyers, and then junior guard Jack West would grab a steal and immediately take the ball down the court for a transition layup. West was also fouled but the free throw was no good, and the Captains led 56-55. On the ensuing possession Boyers would get another steal that forced the Vikings to intentionally foul to prevent the open layup.

Boyers went 1-of-2 from the line, to increase the Captains lead to 57-55. Two free throws from junior guard Joseph Fitzpatrick would increase Loudoun County’s lead to 59-55. However, senior forward Benjamin Hall would also net two free throws for the Vikings, and the Vikings immediately forced a turnover while the Captains were inbounding the ball.

Loudoun Valley had the ball with a minute remaining and a chance to tie or take the lead, but Fitzpatrick would force the third steal of the overtime period for the Captains and send a pass to West, who calmly finished a layup in transition.

“It was a rush of adrenaline,” junior guard Nicholas Alexander said. “It’s just such a great feeling to win a regional championship with the guys you love and play with every day, your family. And our student section is awesome, they’ve been great all year.”

West had a huge night as he led the Captains with 20 points, five rebounds, and two steals. After the game, the 2nd team All-District guard said the key to the comeback was trusting in the team’s identity.

“We kept playing Loudoun County basketball and we got stops on defense,” West said.

Alexander also had a big night with 15 points, including two three-pointers early in the fourth quarter that started the comeback.

“It feels fantastic,” Alexander said. “To win it how we did, trailing pretty much the whole game and rally back – it’s a phenomenal feeling.”

The Vikings were led by sophomore guard Jayden Johnson who tallied 17 points and three assists. Hall also posted a double-double with 14 points and 11 rebounds.

Loudoun Valley gained an early lead by ending the first quarter on an 11-0 run, which put them ahead 14-7. Dominance on the boards allowed the Vikings to maintain their lead throughout the second quarter, which left the Captains trailing 33-21 at halftime. Coach Alexander told his team to settle their nerves during the break, and attack the basket.

“I think we just got a little emotional, we got a little out of sorts,” Coach Alexander said. “I said look we’ve got to have better character about ourselves, our body language, the way we carry ourselves – all that stuff is going to make a difference if we’re going to win this game. (Valley) played lights out in the first half, we tried to find ways to slow them down – Jayden Johnson is unbelievable. But I thought if we could get to the rack a little more it could open some things up, and it did.”

Loudoun Valley maintained their lead through the third quarter powered by Johnson’s playmaking ability and Hall’s second chance points. The Vikings had a 46-33 lead to start the fourth, but it was quickly diminished by an 8-0 Loudoun County run that was topped off with a deep three-pointer from Alexander.

“My shot has felt good the last couple weeks,” Alexander said. “At first it wasn’t falling, but I knew if I kept shooting they’d start to fall. I knew we had to start making shots so I let a deep one fly and got it going. We knew if we boxed out and executed our stuff that we could score and compete with them.”

The Captains eventually cut the lead to 50-48, after senior guard Jimmy Daughtrey dished a pass to West who buried a three-pointer, sending the crowd to its feet. West converted another clutch layup on the following offensive possession, to tie the game at 50 with a minute remaining.

Loudoun County earned another stop on defense and Alexander would give the Captains the lead after attacking the rim to create an open layup. The Vikings took a timeout with 35 seconds remaining in the game. Johnson would drill a clutch jump shot to tie the game at 52.

“I feel happy for the kids,” Coach Alexander said. “They started to find their groove and the momentum shifted early in the fourth. We started to chip away, next thing you know it was a close game. Even in overtime a guy hits a three, our guys’ body language didn’t really change, they went down and played. These kids have had this type of character all year.”

The Dulles District Coach of the Year also praised the Captain’s senior leaders.

“This was Brendan (Boyers) and Jimmy (Daughtrey)’s third region final game,” Coach Alexander said. “They’ve won two, and lost one last year. I can’t say enough about the champions they are. Those two kids were our senior leaders all year long.”

Loudoun County will host E.C. Glass for the Class 4 state quarterfinal next week.

“We’re gonna get a little time off and get off our legs, but I think these guys would play tomorrow if they had to,” Coach Alexander said.