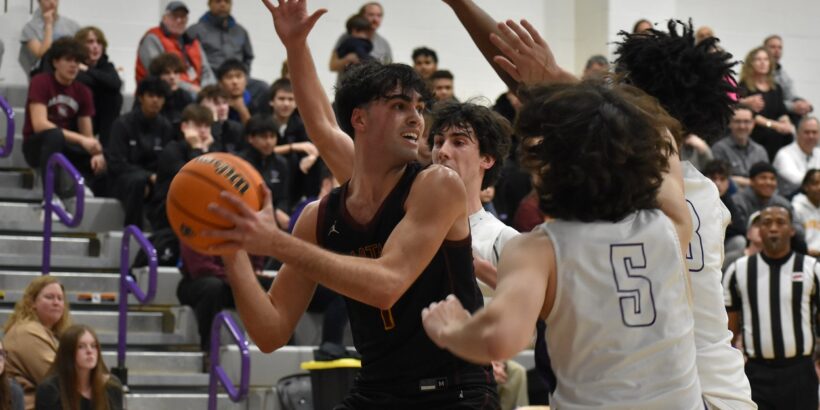 “Every time you pull up for a jumper you’re bailing the defender out – no one can guard you at the rim.”

Perdue heeded his coach’s words as he would go on to attack the basket all night long and help lead his team with 14 points and four assists, en route to a 64-51 victory over Potomac Falls.

Junior forward Colin Pollock also had a big night for the Spartans with 20 points and seven rebounds. Junior guard James Delaney led the Panthers with 11 points.

“We’ve got so many guys who we can trust with the ball in their hands,” Coach Krogh said. “Our starting five into the bench, we’ve got guys who can score. Guys who at other places would have bigger roles. We’re able to hunt matchups in a way that, if anyone is being played incorrectly— they can go. Obviously Matin Perdue scoring 18,19 a game helps and you can pencil him in for that. But our supporting cast is taking care of any slack as well.”

The Panthers (7-4) got off to a 5-0 lead as Coach Jeff Hawes’ defense forced a few early turnovers. But Broad Run (8-2) would eventually respond with a 7-0 run as Perdue and Pollock found their way to the basket.

Coach Krogh knew that the Panthers would be applying their typical high-pressure defense, so he encouraged his team to break the zones and get to the rim.

“We really didn’t run any of our sets,” Coach Krogh said. “Pot Falls pressures so we knew it was going to be more about making that pressure pay than it was about executing our typical half-court sets. I was really impressed with how the guys handled the pressure. We were able to break that pressure, get to the paint, and make good decisions. I don’t know if we ran more than five sets the whole night. But we countered that pressure by taking care of the ball in the half-court.“

The Spartans went into the 2nd quarter leading 10-9, but began to pull away late in the quarter as they ended the half on a 10-2 run to give them a 25-16 lead heading into the 3rd quarter. Broad Run continued their momentum in the second half. They led the Panthers 45-27 heading into the final quarter.

Potomac Falls implemented a full court trap during the 4th quarter, and at one point they cut the Spartans lead to eight at 47-39. But Broad Run again regained their composure to beat the zones, and forced stops on defense to close out the game.

“Our identity is defense,” Perdue said. “We improve every game. Staying locked in on that side of the ball will lead to buckets on offense.”

Prior to the game Coach Hawes read a tearful tribute for former Broad Run basketball Coach and teacher, John Costello. Hawes described Costello as ‘one of the best human beings he ever met.’