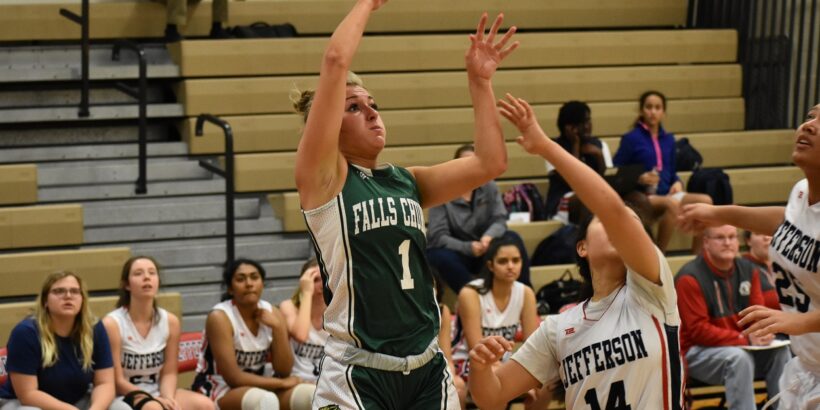 Falls Church's Sadie Laughlin, recently returned from an ACL injury, drives to the hoop in the Jaguars' fierce battle with TJ.
Share List

Last night’s National District contest between the Falls Church Jaguars and Thomas Jefferson Colonials saw another reason why the competition in this area is so fantastic.

Despite both being middle of the pack in the district standings, the two teams put on a show with several lead changes and ties, and we’re pretty certain some spikes in blood pressure amongst the spectators until the very end, a 51-48 Jaguars victory.

The host Colonials got off to a hot start, having their way on offense and hitting shots from outside. TJ sophomore post Kaiden Kerkulah (22 points, five rebounds, one block) spearheaded the attack with nine points in the first quarter, getting to the line multiple times in and-one opportunities.

Falls Church (2-2, 5-7) managed to wake up by the end of the quarter, though. “[Kerkulah] is such a nice player, we just had to stop her and we couldn’t let her get the second chances,” said Jaguars Head Coach Katelyn Charbonneau. “We had to take her out of the game. The biggest thing for us was rebounding and not letting them have second opportunities.”

The start of the second quarter saw Falls Church only down one, and the period would see four lead changes as both teams sought out their groove. All-district performer post Simone Pendleton (23 points, four rebounds, three blocks) would get going, notching ten points and a block in the quarter as the Jaguar offense rallied around her. They took their first lead of the game off an and-one from her.

“Her growth from last year is that she’s not afraid of taking the big shots anymore. She knows she can take anybody. She’s great at creating her own shot, getting steals, rebounds and taking it to the basket,” said Charbonneau of Pendleton.

The second half opened up tied, and the Jaguars led by as many as seven as turnovers began to plague the Colonials in the third. They managed to pull within two before the fourth began, 41-39.

The last quarter resembled the second in its offering of ties and lead changes, flipping six times to stay neck-and-neck until Falls Church jumped ahead by three thanks to penalty free throws.

Junior Guard Emily Keefe (eight points, three boards, two blocks) was instrumental in closing out the game, coming up with clutch defense down the stretch. Her timely single three of the game helped push them to the finish line. Right beside her was junior guard Emily Strother (seven points, four steals), helping the Jags keep TJ at a distance.

The Colonials (1-3, 3-9) take the loss but not without bright spots. The aforementioned Kerkulah was a force down low, shooting very well from the field and FT line. Sophomore guard Abigail Lee also shot well from the floor, going for nine points and three rebounds. Josephine Clayton ran the offense all night with a solid six points, four rebounds, and two assists. TJ hosts Annandale on Tuesday.

Meanwhile, Coach Charbonneau called this victory a huge one for her squad, noting how important it is to get a win in a district that has much separation between the perennial top school (Edison) and their competitors.

“TJ and us, we fight every year. It’s always a close game. So well-coached, and this is a big one. We’re a young team, we have no seniors. So in a close game like this, it’s a big step forward for us.”