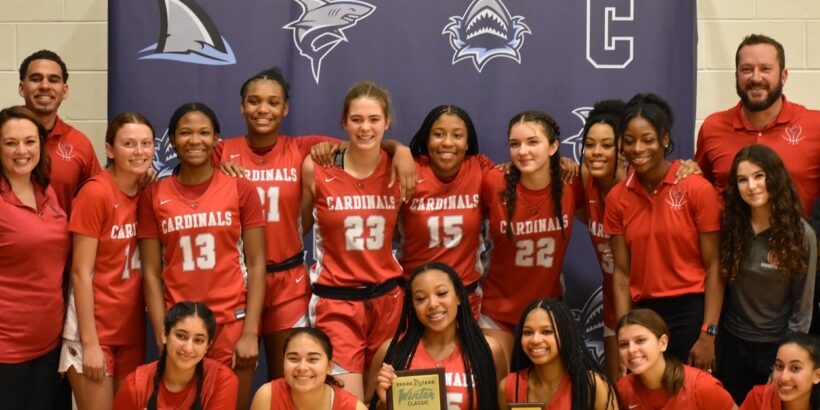 The Cardinals have some lofty goals for this season and beyond--one was accomplished Friday night.
Share List

The Gainesville girls had a solid launch to its program a year ago, giving Woodbridge a tough game at regionals. Now, the Cardinals aspire to achieve much, much, more.

But, first thing’s first. One of the team’s goals this year was to win the First Annual Colgan Shark Tank Winter Classic, a tournament littered with solid teams. The #12 Cardinals accomplished that goal Friday night with a 46-34 victory over the host Sharks in the title game.

“This was big for us,” said Gainesville coach Daniel Nemerow. “Last year we didn’t get a holiday tournament…just the experience of three games in three days was going to be a big deal for us. We wrote this down on our list of goals [to win it].”

The Cardinals led from wire-to-wire against Colgan, spurred in no small part by junior guard Madison McKenzie’s game-high 18 points. McKenzie had been out a few games due to injury in December, so her return was a welcome boost.

“We played three games without Madison,” Nemerow said. “Getting her back in the fold was big, we’re almost healthy for the first time since the second game of the season.”

Her return was key against a game Colgan team that would not quit in front of its home fans. Gainesville’s active zone defense and length gave the smaller Sharks trouble, especially in the first half. Colgan could only manage 11 points by halftime, unable to get clean looks at the basket.

Down 24-11, the Sharks used defensive pressure of their own to inch closer in the third quarter. They pressured Gainesville and came up with several steals, and also started to attack the rim in both the half and full court, drawing fouls.

But McKenzie and the Cardinals (8-1) responded after Colgan cut their lead to single digits. Out of a timeout, McKenzie drilled one of her four three-pointers on the evening, promptly re-extending her team’s lead.

In the fourth quarter, the Sharks had to get shots up a little faster to try and come back, but they couldn’t quite get there. The hosts impressed in their three-day tournament by defeating Colonial Forge and West Potomac, and actually out-rebounding Gainesville on Friday night. The Cardinals had defeated Colgan by 24 earlier in the season–this game was far closer.

While Colgan (6-5) continues to show progress, so does Gainesville, who we think could be a state title contender as soon as this season. There’s still a long way to go for Nemerow’s team before that goal becomes reality, however.

“The really good teams that you see are so consistent,” said Nemerow, whose team only has two seniors. “I think that’s where we’re struggling a little bit right now. We had a lull in the third quarter tonight, but some of that has to do with Colgan being a good team.”

“They came out and made some adjustments to what we were doing offensively and defensively and we kind of got like punched a little bit where we had to punch back.”

“We’re so young, Peyton [White] and Demi [Gilliam] are both freshmen. “The more situations we’re in like this…that’s good experience for us.”

Gilliam had a double-double with 10 points and 11 rebounds on the evening. White had a nice game as well, with six points and three assists.

The Sharks, which only have three seniors themselves, were led by sophomore Mariah Barksdale’s 10 points. Junior guard Bea Quiroz added eight points and three assists.