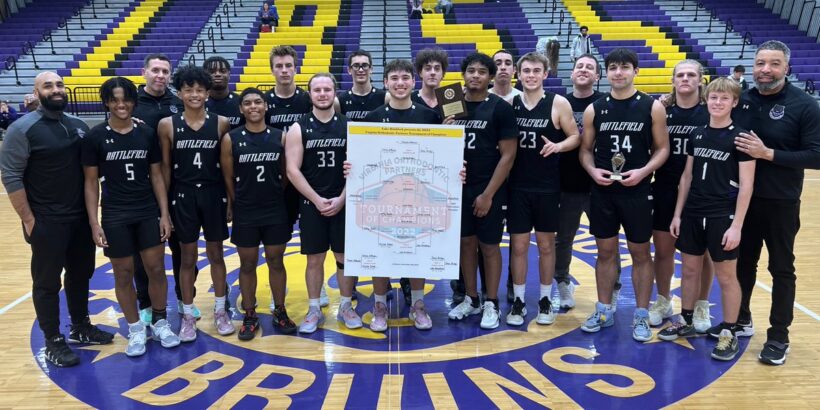 So much about keeping a winning streak intact is believing and knowing your team will win before it even takes the court.

Battlefield put its 11-0 mark to the test Thursday night against country rival Briar Woods in the final of the Virginia Orthodontic Partners Tournament of Champions at Lake Braddock and walked off with a third win in three nights to capture the trophy, 62-44.

The Bobcats appeared to be physically stronger than the Falcons, holding a 15- to 20-pound size advantage. They used that bulk on defense and on the boards to wear down their opponent and power to the basket at will, particularly in the second half.

Ryan Derderian scored 12 points and was named the tournament’s most valuable player. He’s finding his way back into the mix after recovering from a torn labrum late last season.

Battlefield had nine players in the scoring column on Thursday, including Aiden Flores, who had 12 points off the bench in the fourth quarter alone, 10 points coming on shots 3 feet from the basket. The Bobcats never trailed.

“We work hard for everything,” senior, third-year varsity guard Hasan Hammad said. “We expect to win. Our plan is to attack. We like to get inside.”

Battlefield has continued its strong (and somewhat surprising) run from last year when it reached the state final, including a win over Patriot, before falling to Hayfield. Its experienced, broad-shouldered lineup that features several varsity football players is poised for a postseason return.

After trailing by seven at the end of the first quarter, Briar Woods used its clutch outside shooting in the second quarter to pull into a 19-19 tie on Ben Pearsall’s three-pointer. Teammate Ryan Brzezanski did his share – hitting four three-pointers in the first half – and his team trailed by only five at intermission.

But the third quarter spelled doom for the Falcons (4-5). They scored only two points in the period and Brzezanski hardly touched the ball. In the second half, he took only two shots (made one three-pointer) and finished with a team-high 15 points. Teammate Devon Pettibone added 12 points on four three-pointers.

Hammad said his team’s plan going into the game was to limit Jackson Kelley, who was a big part of the Briar Woods’ win over Lake Braddock the night before. Kelley scored his team’s second basket of the game on Thursday, but nothing more.

Battlefield is battle-tested this season. It has three-point wins over Independence and Forest Park and topped South Lakes, 61-59, a team it lost to by 13 a season ago. The Bobcats host bitter rival Patriot on Jan. 13.